David Penrose’s “Sentry” project comprises an array of passive IR sensors placed throughout a building to track motion. The microcontroller-based system comprises an RF link to a processor along with an Ethernet module to unobtrusively monitor motion and activity levels. 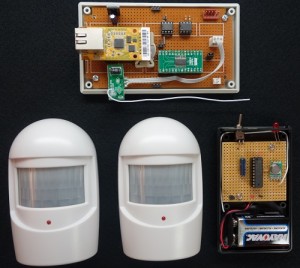 Photo 1: The Sentry system uses commercial IR motion sensors (lower left) together with a customer vibration sensor (lower right) to determine where an individual is within a building. The base unit (top) integrates reports from these sensors to generate alerts to a caregiver.

My Sentry System is designed to assist those folks living alone who desire the peace of mind provided by a caregiver looking after them without the caregiver having to be present. Its implementation was facilitated by the WIZnet WIZ550io Ethernet module, which provides a rich yet simple interface to the Internet. With a simple microprocessor, the system allows the status of a resident to be continuously monitored in a minimally intrusive fashion.

Any abnormal conditions can immediately be alerted to a remote caregiver for action. In this way, a caregiver’s smartphone acts as an alert system by letting them know when a resident’s activity deviates from a normal pattern. The system is designed to be simple to set up yet very flexible in its application so the needs of different residents can be addressed. A resident with minimal needs can be monitored by a set of relaxed rules, while a resident in need of more continuous observation can be assigned a set of strict rules. In all cases, the overarching design approach was to provide a system that augments the caregiver’s capability.

Penrose goes on to describe the system:

The Sentry System integrates motion sensors, a microprocessor, and the WIZ550io Ethernet interface to monitor a resident and report abnormal activity patterns to a remote caregiver (see Photo 1). The relationship of these subsystems is illustrated in Figure 1. 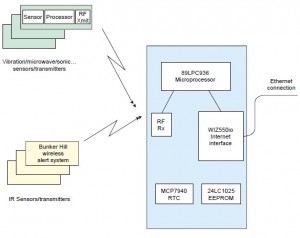 Figure 1: Up to eight sensors transmit activity to a base unit processor, which checks for abnormal behavior of a resident. Alerts to a caregiver are generated and communicated over the Internet.

The primary sensors are IR motion sensors. These can be augmented by vibration sensors, pressure mats, ultrasonic, and other devices capable of detecting a person’s presence. These sensors are placed at key locations in a resident’s home to monitor movement from room to room or within rooms. The vibration sensors are placed in favorite chairs/couches or in the bed to determine if the furniture is occupied and if there is normal activity. All of these sensors are battery powered and report over an RF link. The RF reports from these devices are received by a base unit which then compares the resident’s location and activity to a set of rules that define normal behavior for different times of day. Any deviation from normal results in an SMS text message or e-mail being sent to the caregiver along with information about how to contact the resident. In most cases, it is expected that the caregiver would respond by phoning the resident to check on them.

The system is designed to be easy to install and operate. The WIZ550io’s Internet interface is used to communicate to a browser allowing the caregiver or resident to configure the system. This configuration consists of identifying sensors and rooms and describing a set of rules for each room for periods in the day. This local interface also allows for a review of all past activity once the system is operational. This history data is valuable for refining the rules to reduce false alarms and ensure security. Since the interface is behind the resident’s firewall, the system is secure from improper modification. The key output from the system is the alert to the caregiver, which relies on the WIZ550io module communicating to a service site such as Exosite. The site generates the alerts sent to the caregiver. 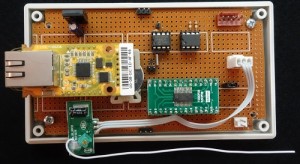 Photo 2: The base unit incorporates the WIZ550io, an 89LPC936 processor, a MCP79401 real-time clock, and a serial EEPROM to process reports received from the 433-MHz receiver.

The system’s hardware consists of a base unit and multiple sensor/reporting units. The base unit (see Photo 2) comprises a WIZ550io Ethernet interface, an inexpensive microprocessor, an RF receiver, a battery backed-up real-time clock, and a serial EEPROM. All of these pieces are integrated into a small form factor case and powered by a plug-in transformer (see Figure 2).

Figure 2: The microprocessor accomplishes all of its tasks while using only a few of the available port pins.

The remote units can be one of many different sensor/reporting devices depending on the needs of the resident. The basic sensor is the IR motion sensor, which is available from a number of different sources.  I used Bunker Hill Security sensors, which I purchased from Harbor Freight Tools (Item 93068). A sensor plus receiver is very inexpensive. Some cost only $11. The item consists of a sensor/transmitter and a receiver/alarm device. The receiver/alarm device is not used in this project although the RF receiver was lifted from one of these units to provide the receiver for the base unit. These sensor units are powered by 9-V batteries and report on an RF link at 433 MHz with a unique address code.  The code allows multiple sensors to be deployed and recognized by the base unit.