Determining a heating system’s output can be much more difficult, unless you have this nifty design. This Atmel ATmega microcontroller-based project enables you to measure heat output as well as control a circulation pump.

Heating bills often present unpleasant surprises. Despite your best efforts to economise on heating, they list tidy sums for electricity or gas consumption. In this article we describe a relatively easy way to check these values and monitor your consumption almost continuously. All you need in order to determine how much heat your system delivers is four temperature sensors, a bit of wiring, and a microcontroller. There’s no need to delve into the electrical or hydraulic components of your system or modify any of them.

A bit of theory
As many readers probably remember from their physics lessons, it’s easy to calculate the amount of heat transferred to a medium such as water. It is given by the product of the temperature change ΔT, the volume V of the medium, and the specific heat capacity CV of the medium. The power P, which is amount of energy transferred per unit time, is:

With a fluid medium, the term V // Δt can be interpreted as a volumetric flow V/Δt. This value can be calculated directly from the flow velocity v of the medium and the inner diameter r of the pipe. In a central heating system, the temperature difference ΔT is simply the difference between the supply (S) and return (R) temperatures. This yields the formula:

The temperatures can easily be measured with suitable sensors. Flow transducers are available for measuring the flow velocity, but installing a flow transducer always requires drilling a hole in a pipe or opening up the piping to insert a fitting.

Measuring principle
Here we used a different method to determine the flow velocity. We make use of the fact that the supply and return temperatures always vary by at least one to two degrees due to the operation of the control system. If pairs of temperature sensors separated by a few metres are mounted on the supply and return lines, the flow velocity can be determined from the time offset of the variations measured by the two sensors…

An ATmega microcontroller constantly acquires temperature data from the two sensors. The time delay between the signals from a pair of sensors is determined by a correlation algorithm in the signal processing software, which shifts the signal waveforms from the two supply line sensors relative to each other until they virtually overlap.The temperature signals from the sensors on the return line are correlated in the same manner, and ideally the time offsets obtained for the supply and return lines should be the same.

Hot water please
If the heating system is also used to supply hot water for domestic use, additional pipes are used for this purpose. For this reason, the PCB designed by the author includes inputs for additional temperature sensors. It also has a switched output for driving a relay that can control a circulation pump.

Under certain conditions, controlling the circulation pump can save you a lot of money and significantly reduce CO2 emissions. This is because some systems have constant hot water circulation so users can draw hot water from the tap immediately. This costs electricity to power the pump, and energy is also lost through the pipe walls. This can be remedied by the author’s circuit, which switches on the circulation pump for only a short time after the hot water tap is opened. This is detected by the temperature difference between the hot water and cold water supply lines…

Circuit description
The easiest way to understand the schematic diagram is to follow the signal path. It starts at the temperature sensors connected to the circuit board, which are NTC silicon devices. 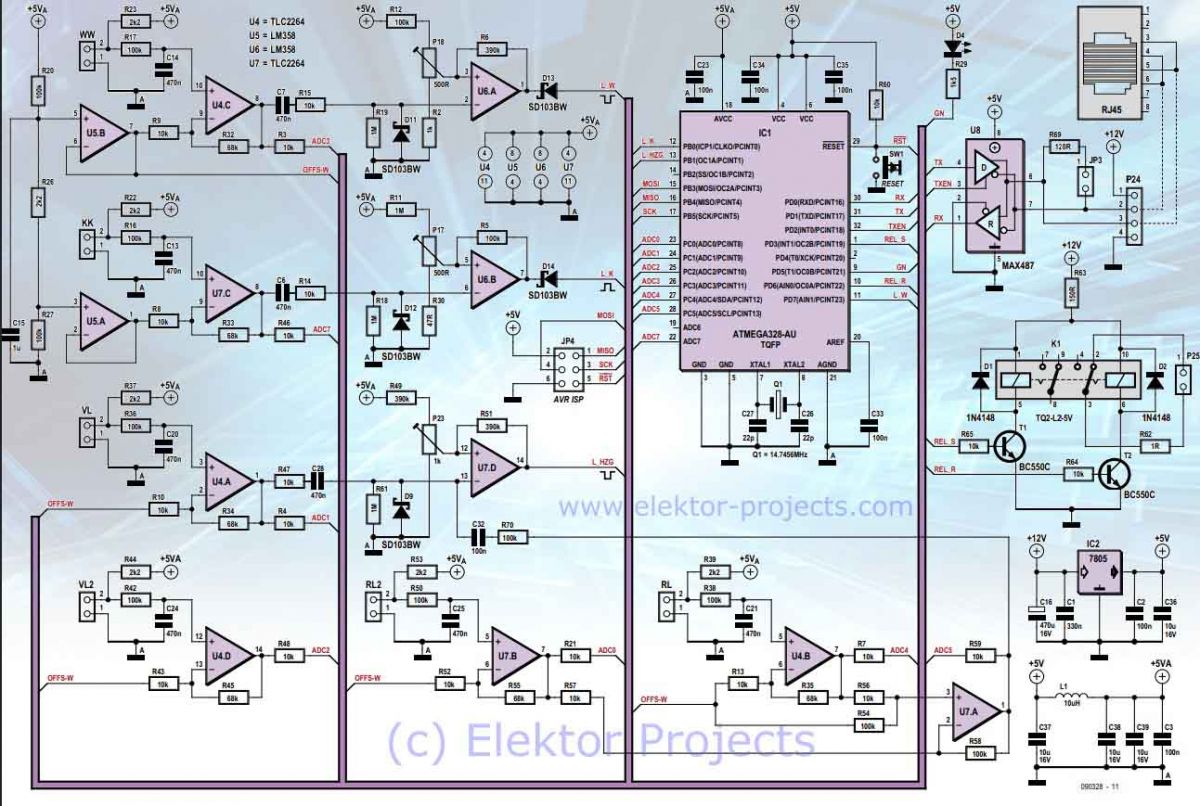 The sensor for supply temperature S forms a voltage divider with resistor R37. This is followed by a simple low-pass filter formed by R36 and C20, which filters out induced AC hum. U4a amplifies the sensor signal by a factor of approximately 8. The TL2264 used here is a rail-to-rail opamp, so the output voltage can assume almost any value within the supply voltage range. This increases the absolute measurement accuracy, since the full output signal amplitude is used. U4a naturally needs a reference voltage on its inverting input. This is provided by the combination of R20, R26 and R27. U5b acts as an impedance converter to minimise the load on the voltage divider… 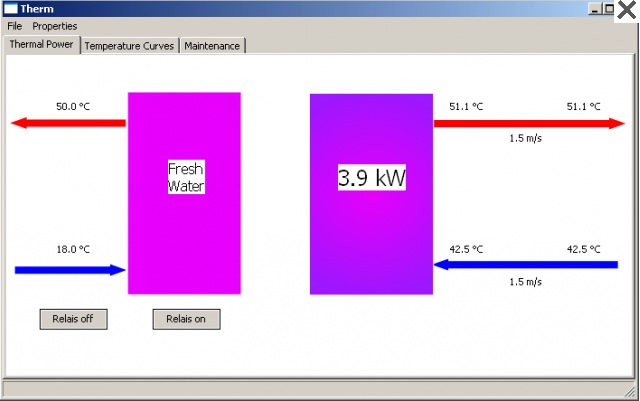 PC connection
The circuit does not have its own display unit, but instead delivers its readings to a PC via an RS485 bus. Its functions can also be controlled from the PC. IC U8 looks after signal level conversion between the TTL transmit and receive lines of the ATmega microcontroller’s integrated UART and the differential RS485 bus. As the bus protocol allows several connected (peer) devices to transmit data on the bus, transmit mode must be selected actively via pin 3. Jumper JP3 must be fitted if the circuit is connected to the end of the RS485 bus. This causes the bus to be terminated in 120 Ω, which matches the characteristic impedance of a twisted-pair line…