James Kim—a biomedical student at Ryerson University in Toronto, Canada—recently submitted an update on the status of an interesting prosthetic arm design project. The design features a Freescale 9S12 microcontroller and a Microsoft Kinect, which tracks arm movements that are then reproduced on the prosthetic arm.

He also submitted a block diagram. 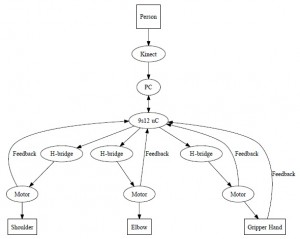 The 9S12 microcontroller board we use is Arduino form-factor compatible and was coded in C using Codewarrior.  The Kinect was coded in C# using Visual Studio using the latest version of Microsoft Kinect SDK 1.5.  In the article, I plan to discuss how the microcontroller was set up to do deterministic control of the motors (including the timer setup and the PID code used), how the control was implemented to compensate for gravitational effects on the arm, and how we interfaced the microcontroller to the PC.  This last part will involve a discussion of data logging as well as interfacing with the Kinect. 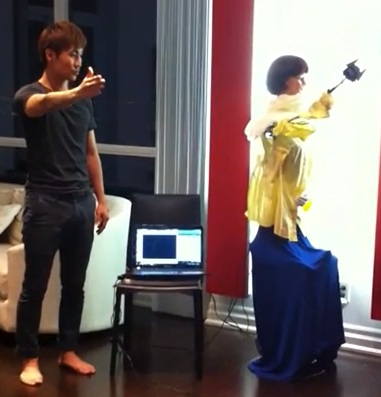 The Kinect tracks a user’s movement and the prosthetic arm replicates it. (Source: J. Kim, YouTube)

Circuit Cellar intends to publish an article about the project in an upcoming issue.