Written by Circuit Cellar Staff
Multimedia artist Leonardo Ulian’s work includes his stunning “Technological Mandala” series, in which he precisely arranges tiny electrical and computer components to create colorful and symmetrical mandalas. In Hindu and Buddhist cultures, a mandala is a geometric and spiritual artwork representing the universe and is used in meditation. In this interview, Leonardo discusses his background, artwork, and inspiration for blending technological and ephemeral themes.—Mary Wilson, Managing Editor

MARY: Where were you born and how long have you lived in London?

LEONARDO: I come from a little village called Ruda, situated in the northeast region of Italy, Friuli-Venezia Giulia. I have lived in London since 2004. 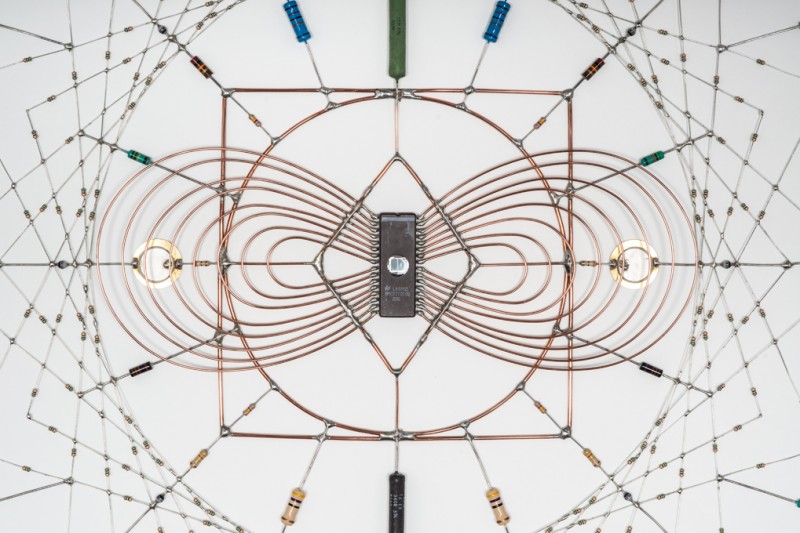 MARY: I understand you started out pursuing a degree in micro-electronics, then trained as a graphic designer before earning a fine arts degree. Can you tell me about your education and what made you turn your training toward the arts?

LEONARDO: My first attempt to do art was more related to the activity of just making things. Since I was very young, I always liked to play with hammers, nails, pieces of wood, and other bits and pieces in order to make my own little toys. But more than anything else, I liked to open old radios to see what was hiding inside.

In the 1980s, I attended an electronics school, also because I was fascinated by the new technology revolution of that period. I do remember myself stuck in front of the television watching an American TV series about robots, computers, and all that sort of stuff. While I was studying electronics I attended an art course and I specialized in airbrush hyper-realistic painting techniques. I then studied graphic design and I worked as a graphic designer and photo-retoucher for several years until I moved to London where I obtained my BA degree in fine art. 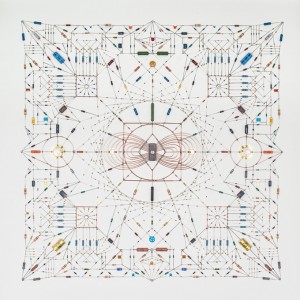 MARY: How did you come up with the idea for the “Technological Mandala” series? What was your inspiration and what are you trying to convey with these pieces that solder together electrical components, circuitry, and microchips?

LEONARDO: I liked the idea of combining different worlds such as spirituality and mandalas with technology and underlining the fact that electronic technology devices have become fundamental for our daily lives, almost something to worship.

I am also fascinated by the pure exercise of geometry used for the construction of the traditional mandalas—an ordered representation that is used to explain something that probably has nothing to do with geometry, which is the meaning of everything we perceive around us as living beings. I guess my artistic and spiritual research have led me to discover the world of mandalas.

I am not a spiritual person, or at least not in the traditional manner. And I am not particularly polarized with a specific belief. But I do like the idea of a world made with infinite connections among persons, objects, or places, like the connections I make in my technological mandalas. I also like to believe that what happens in one of the parts of the connection can affect the others as well.

Electronic components have always fascinated me; there was something in them that has attracted my fantasy since I was very young. I always asked myself how these little things were able to do what they do within electronic devices. After my studies in fine art, I started to think about my old passions and interests in a different way. This is why now, in my eyes, the electronic components have lost their real functionality in order to become ephemeral objects able to trigger the eyes and minds of the viewers, but in a different manner. 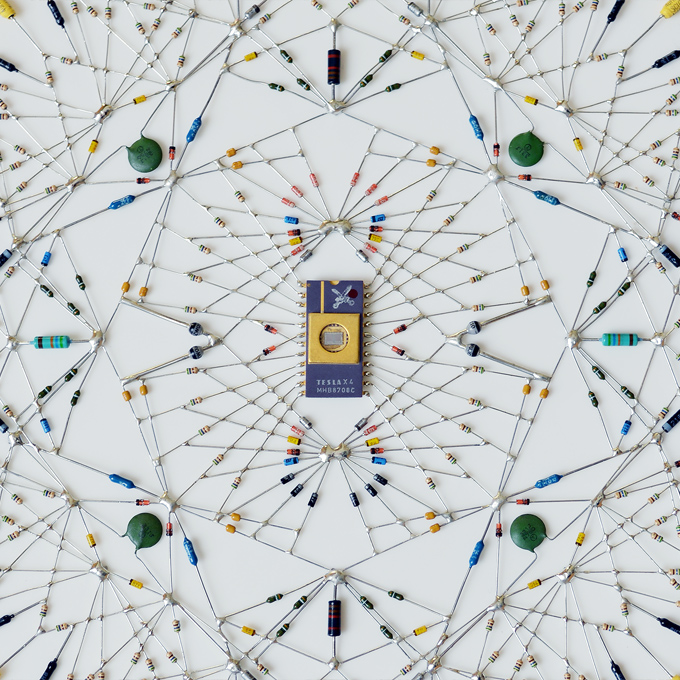 MARY:  Can you describe how you created the pieces? The materials and techniques you used?

LEONARDO: I make the basic geometry design in a computer. I print the resulting image onto paper, and then I bring in countless electronic components—some recycled but most bought from online websites—to fill in the shape I have created. I spend hours online researching nice and colorful electronic components. The difficulty is that nowadays technology is moving toward miniaturizing the electronic components, and quite often they do not have any color code.

MARY: You started the series two years ago. Is it now complete?

LEONARDO: The series isn’t yet completed, it’s a work in progress and I do not know when it will be finished. I guess the series is evolving as the technology—especially the electronic one—is changing rapidly. 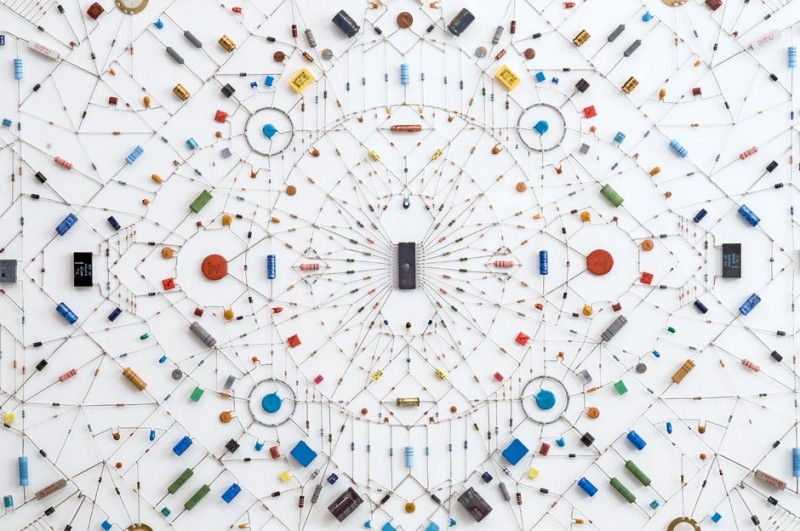 MARY: Do you have other artwork, such as “Technological Mandala,” that presents technology in an unconventional and thought-provoking way? Can you tell me more about that work?

LEONARDO: One of my early pieces is called “Now and Forever.” It’s an old petrol lantern modified in order to have, instead of the real flame, a mini-LCD screen with a video of it. The virtual flame within the mini screen is powered by a DVD player instead of the petrol, and it could run forever—or at least until there is no longer electricity available. 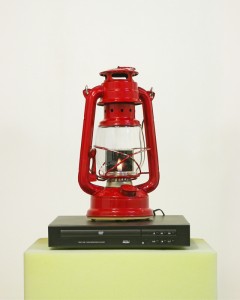 MARY: What technologies most interest you? Do any of them intrigue you as inspiration for future projects? If so, how might you use them?

LEONARDO: I do not have a particular interest in a specific piece of technology; I like to pick up things that stimulate my imagination. But, among other things, I am fascinated by magnetic fields and how the spectator could interact with them in order to generate art.

The piece “Close to the Essence” explores my interest in magnetic fields. It is a system of elements, like a hi-fi system, that becomes a totem able to interact with the spectator. The whole structure becomes a giant theremin I made using three simple AM radios, and the sound generated by the sculpture varies according to the proximity of the viewers. 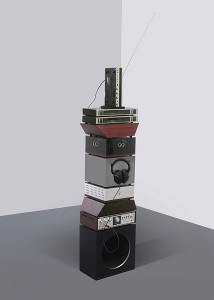 “Close to the Essence” (Photo courtesy of Leonardo Ulian)

MARY: What project are you currently focusing on?

LEONARDO: At the moment I am focused on further developing the idea started with the “Technological Mandala” series.

MARY: Do you have a dream project, something you are resolved to do sometime during your artistic career?

LEONARDO: I do not have a specific dream project, although my sketchbooks are full of ideas. I try to work day by day in order to produce things I am happy with. I have to say that almost always I have doubts about the things I make, but this keeps me going forward to create the next piece. 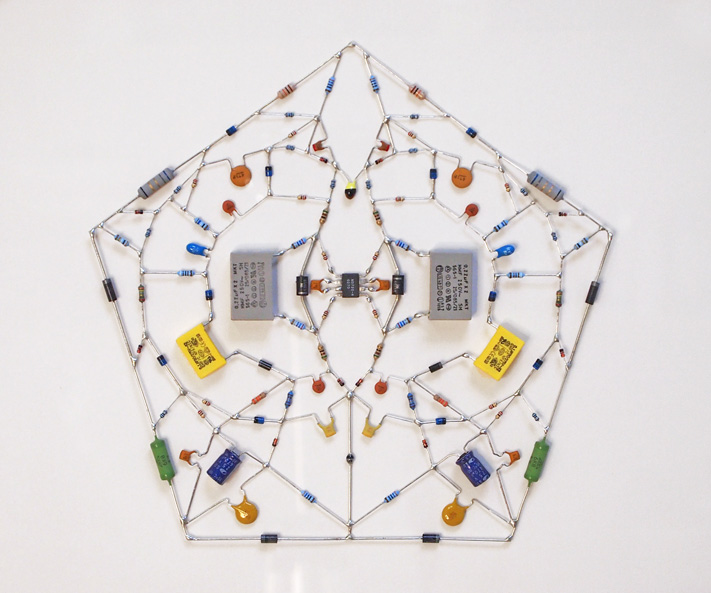 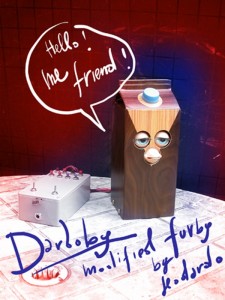 MARY: You are a self-described multimedia artist. Can you tell me about some of your other artistic pursuits, including The Apathy Band you co-founded?

LEONARDO: I do like to think that art can explore different fields, as the great master Leonardo da Vinci did in his practice. The Apathy Band is an open project created by the artists Bob and Roberta Smith and I am one of the co-founders. The instruments I play in the band are toys I have accurately modified, like old electronic keyboards or electronic gizmos and animated toys. Two examples are the Dardomin, a theremin I created using AM radios, and the Dardoby, a circuit-bent Furby toy puppet I use to generate unexpected sound. I have also collaborated with the artistic duo Marotta & Russo to create the soundtracks of their videos. (Refer to “Timeline” and “Netopia.”)

Leonardo Ulian has had numerous solo exhibitions in London and elsewhere. He is the recipient of the Owen Rowley Award, London (UK), and the Italian national prize Stamps of the XX Century. You can follow Leonardo on Twitter at @ulianleonardo. 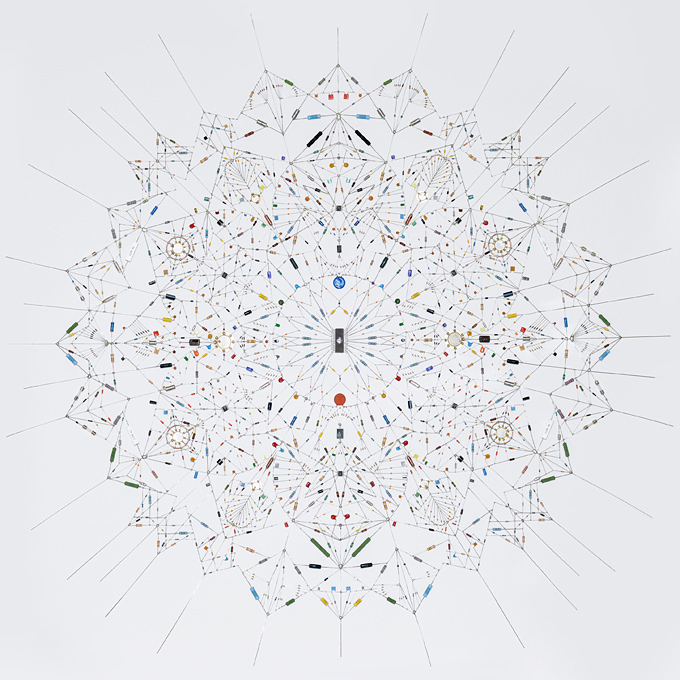 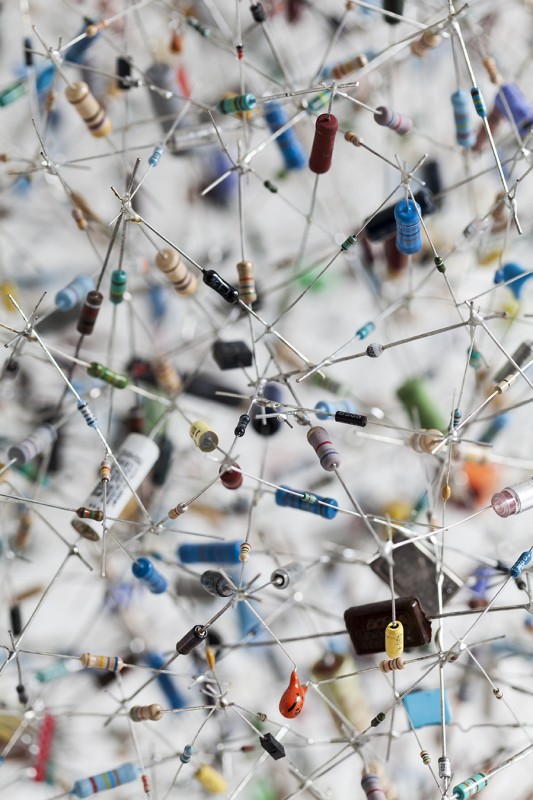 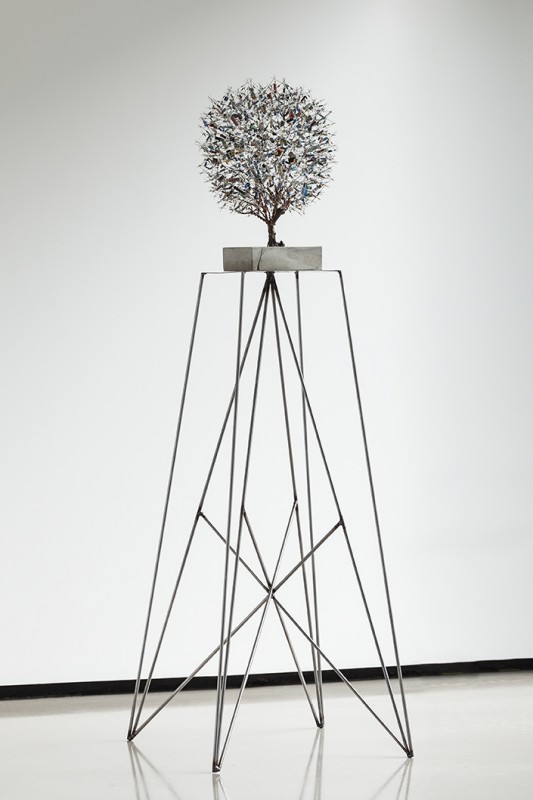