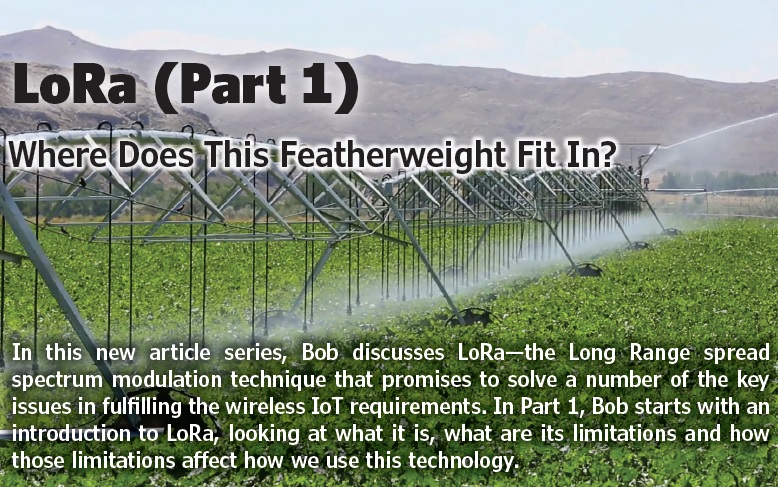 Where Does This Featherweight Fit In?


In this new article series, Bob discusses LoRa—the Long Range spread spectrum modulation technique that promises to solve a number of the key issues in fulfilling the wireless IoT requirements. In Part 1, Bob starts with an introduction to LoRa, looking at what it is, what are its limitations and how those limitations affect how we use this technology.

I had several friends who wrestled in high school. One friend in particular was a little wiry guy who weighed about 120 pounds. As some of you may know, high school wrestlers compete in as many as 14 weight classes. Each weight class covers a 6- or 7-pound range. My friend was always trying to get to the lowest possible class. To facilitate this, before the weigh-in, he would fast and binge on Ex-Lax. It always seemed to defeat the advantage of the lighter class by coming into the match weakened by those actions.

This begins a new article series on LoRa—the Long Range spread spectrum modulation technique that promises to solve a number of the key issues in fulfilling the wireless Internet-Of-Things (IoT) hype—especially low power and long range (Figure 1). For purposes of this article series, I will be talking about LoRa devices communicating on a LoRaWAN (LoRa Wide Area Network). In this series, I won’t make a distinction and I’ll just call 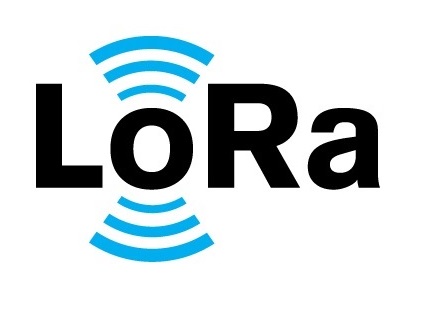 them both LoRa. Jeff Bachiochi laid a great foundation for understanding LoRa in two articles in his June 2017 (Circuit Cellar 323) [1] and July 2017 (Circuit Cellar 324) [2] articles. In part 1, Jeff provided some of the technical details about chirp spread spectrum and how the data packets are formed in the RF cloud. In particular, he discussed how LoRa achieves such range. If you want to dig even deeper into “LoRa Modulation Basics,” check out the Semtech Application Note by the same name [3].

At the end of part 1 and in part 2, Jeff went into the details of creating a peer-to-peer test module for verifying the range using a single wire for an antenna. I will try to not cover ground already covered by Jeff, but rather start at a high level and work down into more details as the series progress. In particular this month, I want to ask the question: “Is LoRa like my high school buddy? Is it trimmed down so much that it has lost its ability to fulfill the objectives we require to create wireless IoT devices?” So, this month, we will briefly look at what LoRa is. Then we will look at the practical limitations to achieve these amazing distances at such low power. Finally, we will look at the kind of applications for which this very low bandwidth will be ideally suited.

The LoRa technology was patented by a French company and later acquired by Semtech. The proprietary nature of this Long Range and Low Power technology affects the costs of LoRa chipsets when compared to LTE Cat M1 and other competing wireless technologies. We have done bill-of-materials for competing designs, and the LoRa chipsets are more expensive. We will talk more about this in a later article. Unlike Bluetooth Mesh which achieves long range through a mesh network, LoRa achieves its range in a star of stars type network. Many devices that connect to one gateway and many gateways connecting to the cloud (Figure 2). And the range specifications are impressive (more than 10 km in rural areas). In my tests, as well as in the tests documented by Jeff in Part 2 of his Circuit Cellar article, the real-world numbers—though not being close to the rural area numbers—are still impressive. Again, more on that in a later article. 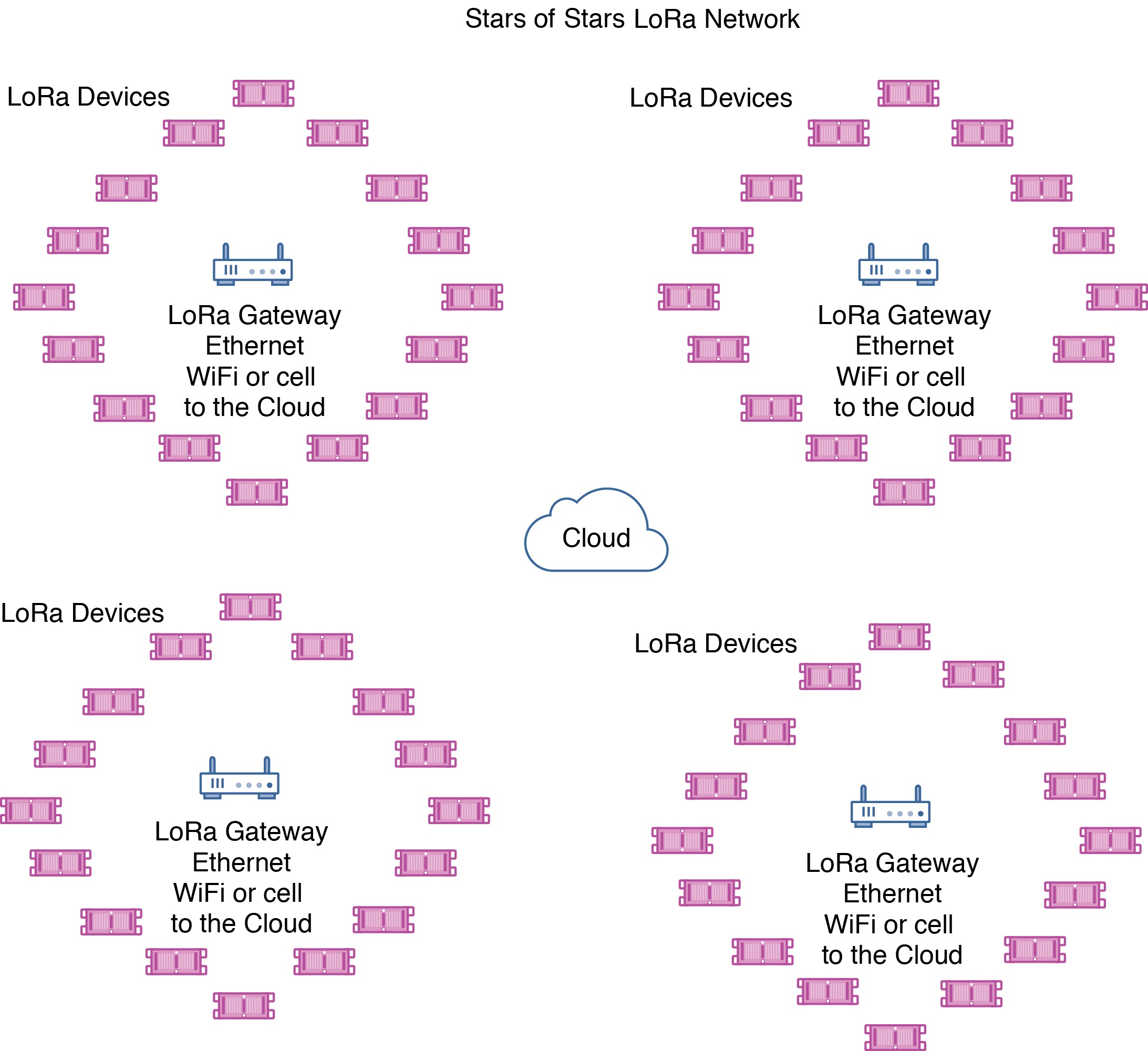 Figure 2
LoRa achieves its range in a star of stars type network. Many devices that connect to one gateway and many gateways connecting to the cloud.

LoRa uses sub-gigahertz license free radio frequency bands: the 868 MHz band in Europe, 915 MHz in North America and 433 MHz for Asia. This means that when you design your LoRa devices and your LoRa gateway, you will need to select the radios for your target area. It also means that you cannot have one device that will work in all regions.

Although LoRa devices could be used in a peer-to-peer network, the primary intent of the creators was for the LoRa devices to have a means of communicating to the cloud. For LoRa devices to communicate to the cloud, the LoRaWAN protocol was specified and is used by a number of cloud-based LoRa networks. There are three approaches to getting the data from your LoRa devices to the cloud: a private network that you create as part of your system design with your own LoRa gateways; a commercial network like MachineQ being deployed by Comcast, which gives you access to their gateways for which you pay for a data plan like you do a mobile data plan; and a community and open-source network like The Things Network (TTN), which provides free access to local gateways. We will explore these options in a later article. …