Home » Living & Working Off the Grid

Interested in engineering your own solar panel system installation? If so, you’ve likely begun researching photovoltaic technology, construction materials, and test equipment on the Internet. Have you been satisfied with the information you’ve found? Probably not. There’s simply a scarcity of reliable electronics engineering advice out there about serious solar panel installation projects. Enter Circuit Cellar. Over the past several years, we’ve published articles by professional engineers about their own installations. 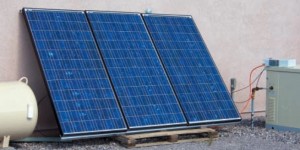 Three panels are wired in series and run into the MPPT controllers. Their capacity is 170 W each, 510 W total, to charge the batteries and put off running the generator. (Source: George Martin CC218)

So, before you get sidetracked with another 3-minute video or bullet-point tutorial, do yourself a favor and read columnist George Martin’s two-part article series “Living and Working Off the Grid.” Here’s an excerpt from Part 1:

“First, I’m an engineer—and an electrical one at that (except my degree is so old that it reads “DC ONLY!”). In addition, my neighbors in New Mexico already have systems up and running. Jeff and Pat live up the road in a handmade log home. Jeff is a former engineer for General Motors (Pontiac GTO, Avanti, and Saturn to his credit). That makes for some interesting discussions about how electronics will revolutionize the car industry, but I digress. He’s a mechanical engineer who doesn’t fully embrace all of this electrical stuff. He has a minimal system with four panels of about 150 W each. Another neighbor’s system has about 3 kW of panels. Armed with the idea that it could be done, I started to match up equipment with our requirements.

The equipment I selected falls into four main categories: solar panels, inverters, charge controllers, and batteries. In fact, you could consider each independently and not get too far off an ideal system. There are, however, some areas of concern when mating equipment from different manufactures, so I stayed with one manufacturer for the control devices.

Solar panels convert solar energy into electrical energy. Again, there is a lot of literature available about how this is accomplished. But what about some hard code conversion details? Standard test conditions require a temperature of 25°C and an irradiance of 1,000 W/m² with an air mass of 1.5 (AM1.5) spectrum. They correspond to the irradiance and spectrum of sunlight incident on a clear day on a sun-facing 37° tilted surface with the sun at an angle of 41.81° above the horizon. This condition approximately represents solar noon near the spring and autumn equinoxes in the continental U.S. with the surface of the cell aimed directly at the sun. Thus, under such conditions, a solar cell with a 12% efficiency and a 100 cm2 (0.01 m2) surface area can be expected to produce approximately 1.2 W of power.[1] This gives you an idea of what’s involved in rating and selecting solar panels. Look at the University of Western New Mexico’s weather site for solar radiation and you’ll get a feeling for the actual solar radiation for the area.

There is another consideration when selecting a panel, namely cost per watt. If you start looking, you will find panels of different wattages and different prices. In March 2004, I started a spreadsheet listing panels from 125 to 195. Note pricing from March 2004, purchased equipment in 2005, installed in 2006–2007, and operational in October 2007. Then, I added the costs different suppliers were charging for each panel and calculated a price/watt number.

More polysilicon is currently being used in solar panel manufacturing than all other usages combined, so this is big business. It also seems that the larger-power-rating panels command a higher price per watt. It is sort of like the CPU business where chips are speed graded and priced accordingly.

My cost estimates are a bit old, so you’ll need to run the numbers with today’s prices. Let me add that I found solar panels to be in tight supply, so when you begin your design, look to secure the panels at a good price early in the game.

The 3,000 W in my design was derived from the sun’s availability in the winter. Figure 2 represents the solar radiation for an actual cloudless winter day. 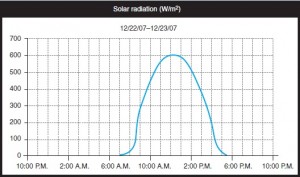 We also need to account for cloudy days. The energy to run the workshop would need to come from the battery or backup generator. Another concern is hot summer days when the panel efficiency drops because of the heat. But the days are longer in the summer. Actually, it’s still a 24-hour day, but there is more available sunlight each day. I don’t have test results for summer generation (because I’m writing this in February 2008 after getting the system put together in October 2007), so stay tuned. The last point to watch out for in panel selection is cold weather open-circuit voltage going into the charge controller.

In the cold, with no current drawn, the open-circuit voltage of the solar panel will rise. If several panels are connected in series (for efficiency), this voltage may damage the input to the charge controller. This is a well-known situation and your equipment dealer will be able to guide you in this area.

I must confess that I find inverters boring. They are not as exciting as solar panels, charge controllers, or even batteries. I thought I would not find much difference in available inverters and that probably was due to my lack of enthusiasm. I selected inverters from OutBack Power Systems. I wanted the inverter/charge controller combination to be from one manufacturer. As I looked at the literature, OutBack seemed to have covered all of the issues for my installation. I ended up with two OutBack VFX3648 inverters (see Photo 2). 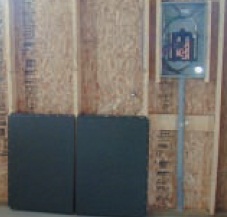 Photo 2: The placement of the Outback System next to the feed into the normal house distribution panel. (Source: George Martin CC216)

They are 3.6 kW (continuous) with connections for a 48-V battery and vented. You will find vented and sealed inverters. I selected vented because they typically have a larger power rating and I’m not in a harsh environment.

Also, the inverters are located in an area that is protected from the elements. Another option is a fan on the inverter. The fan also gives you more capacity, but what will you do when the fan fails, and you know it will? Our system is a normal 220-V home application. So, there are two inverters, one for each phase. OutBack has a neat option that includes a transformer to supply the second phase so the second inverter can remain in a low-power operating mode. When the power requirements become large enough, the main inverter will signal the second (slave) inverter to start up and handle the increased load. This is a good setup for our application. We can install a normal commercial heating/cooling system and power up only the second inverter when the load is calling for it.

Living & Working Off the Grid