Such a network could integrate implanted or wearable sensors that provide continuous mobile health (mHealth) monitoring of a person’s most important “vitals”—from calorie intake to step count, insulin to oxygen levels, and heart rate to blood pressure. It could also provide real-time updates to medical records through the Internet and alert rescue or health-care workers to emergencies such as heart failures or seizures. 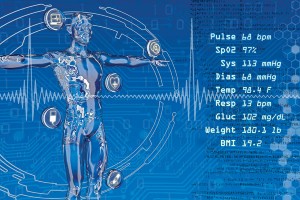 Conceivably, the WBAN would need some sort of controller, a wearable computational “hub” that would track the data being collected by all the sensors, limit and authorize access to that information, and securely transmit it to other devices or medical providers.

Amulet’s Clemson and Dartmouth College research team is prototyping pieces of “computational jewelry” that can serve as a body-area network’s mHealth hub while being discreetly worn as a bracelet or pendant. Motti’s essay elaborates on Amulet’s hardware and software architecture.

Motti isn’t the only one aware of the keen interest in WBANs and mHealth. In an interview in the July issue, Shiyan Hu, a professor whose expertise includes very-large-scale integration (VLSI), says that many of his students are exploring “portable or wearable electronics targeting health-care applications.” 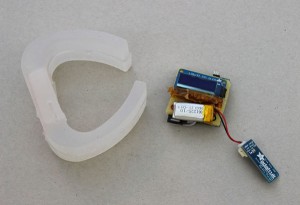 This bracelet-style Amulet developer prototype has an easily accessible board.

Today’s mHealth market is evident in the variety of health and fitness apps available for your smartphone. But the most sophisticated mHealth technologies are not yet accessible to embedded electronics enthusiasts. (However, Amulet has created a developer prototype with an easily accessible board for tests.)

But market demand tends to increase access to new technologies. A BCC Research report predicts the mHealth market, which hit $1.5 billion in 2012, will increase to $21.5 billion by 2018. Evolving smartphones, better wireless coverage, and demands for remote patient monitoring are fueling the growth. So you can anticipate more designers and developers will be exploring this area of wearable electronics.

AND THAT’S NOT ALL…
In addition to giving you a glimpse of technology on the horizon, the July issue provides our staple of interesting projects and DIY tips you can adapt at your own workbench. For example, this issue includes articles about microcontroller-based strobe photography; a thermal monitoring system using ANT+ wireless technology; a home solar-power setup; and reconfiguring and serial backpacking to enhance LCD user interfaces.

We’re also improving on an “old” idea. Some readers may recall contributor Tom Struzik’s 2010 article about his design for a Bluetooth audio adapter for his car (“Wireless Data Exchange: Build a 2,700-lb. Bluetooth Headset,” Circuit Cellar 240).

In the July issue, Struzik writes about how he solved one problem with his design: how to implement a power supply to keep the phone and the Bluetooth adapter charged.

“To run both, I needed a clean, quiet, 5-V USB-compatible power supply,” Struzik says. “It needed to be capable of providing almost 2 A of peak current, most of which would be used for the smartphone. In addition, having an in-car, high-current USB power supply would be good for charging other devices (e.g., an iPhone or iPad).”

Struzik’s July article describes how he built a 5-V/2-A automotive isolated switching power supply. The first step was using a SPICE program to model the power supply before constructing and testing an actual circuit. Struzik provides something extra with his article: a video tutorial explaining how to use Linear Technology’s LTspice simulator program for switching design. It may help you design your own circuit. 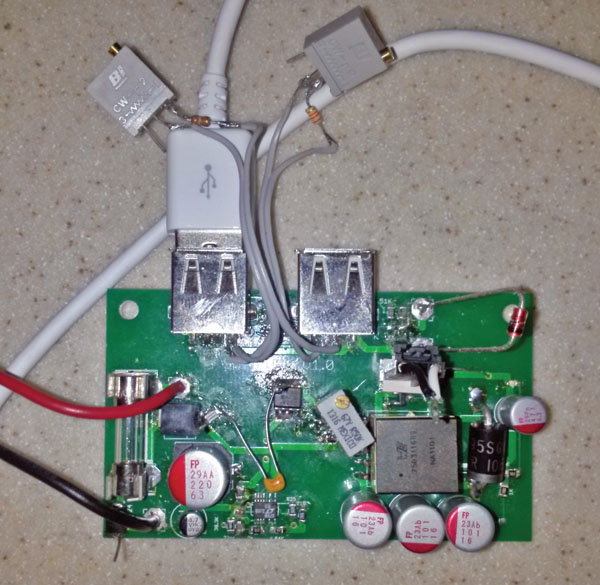 This is Tom Struzik’s initial test circuit board, post hacking. A Zener diode is shown in the upper right, a multi-turn trimmer for feedback resistor is in the center, a snubber capacitor and “stacked” surface-mount design (SMD) resistors are on the center left, USB D+/D– voltage adjust trimmers are on top center, and a “test point” is shown in the far lower left. If you’re looking for the 5-V low dropout (LDO) regulator, it’s on the underside of the board in this design.