The January issue of Circuit Cellar magazine is coming soon. And it’s got a robust selection of embedded electronics articles for you. Here’s a sneak peak.

Special Feature: Powering Commercial Drones
The amount of power a commercial drone can draw on has a direct effect on how long it can stay flying as well as on what tasks it can perform. Circuit Cellar Chief Editor Jeff Child examines solar cells, fuel cells and other technology options for powering commercial drones. 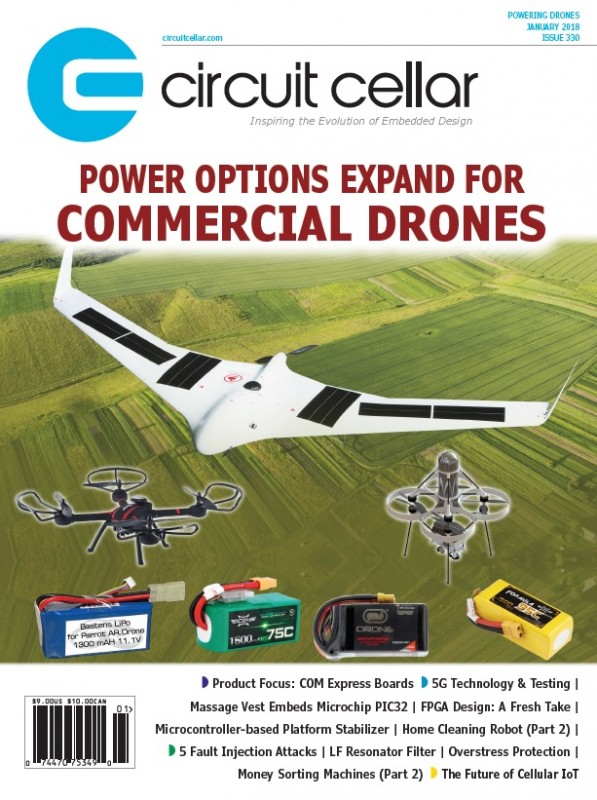 Although FPGAs are well established technology, many embedded systems developers—particularly those used the microcontroller realm—have never used them before. In this article, Faiz Rahman takes a fresh look a FPGAs for those new to designing them into their embedded systems.

COM Express boards provide a complete computing core that can be upgraded when needed, leaving the application-specific I/O on the baseboard. This brand new Product Focus section updates readers on this technology and provides a product album of representative COM Express products.

LF Resonator Filter
In Ed Nisley’s November column he described how an Arduino-based tester automatically measures a resonator’s frequency response to produce data defining its electrical parameters. This time he examines the resultsand explains a tester modification to measure the resonator’s response with a variable series capacitance.

MCU-based Platform Stabilizer
Using an Inertial Measurement Unit (IMU), two 180-degree rotation servos and a Microchip PCI MCU, three Cornell students implemented a microcontroller-based platform stabilizer. Learn how they used a pre-programmed sensor fusion algorithm and I2C to get the most out of their design.

Designing a Home Cleaning Robot (Part 2)
Continuing on with this four-part article series about building a home cleaning robot, Nishant Mittal this time discusses the mechanical aspect of the design. The robot is based on Cypress Semiconductor’s PSoC microcontroller.

Massage Vest Uses PIC32 MCU
Microcontrollers are being used for all kinds of things these days. Learn how three Cornell graduates designed a low-cost massage vest that pairs seamlessly with a custom iOS app. Using the Microchip PIC32 for its brains, the massage vest has sixteen vibration motors that the user can control to create the best massage possible.

AND MORE FROM OUR EXPERT COLUMNISTS:

Five Fault Injection Attacks
Colin O’Flynn returns to the topic of fault injection security attacks. To kick off 2018, he summarizes information about five different fault injection attack stories from 2017—attacks you should be thinking about as an embedded designer.

Money Sorting Machines (Part 2)
In part 1, Jeff Bachiochi delved into the interesting world of money sort machines and their evolution. In part 2, he discusses more details about his coin sorting project. He then looks at a typical bill validator implementation used in vending systems.

Overstress Protection
Last month George Novacek reviewed the causes and results of electrical overstress (EOS). Picking up where that left off, in this article he looks at how to prevent EOS/ESD induced damage—starting with choosing properly rated components.