PROBLEM 1
What is the key difference between the following two C functions?

ANSWER 1
The first function, test_pressure(), converts the ADC reading to engineering units before making the threshold comparison. This is a direct, obvious way to implement such a function.

The second function, test_pressure2(), converts the threshold value to an equivalent ADC reading, so that the two can be compared directly.

The key difference is in performance. The first function requires that arithmetic be done on each reading before making the comparison. However, the calculations in the second function can all be performed at compile time, which means that the only run-time operation is the comparison itself.

PROBLEM 2
How many NAND gates would it take to implement the following translation table? There are five inputs and eight outputs. You may consider an inverter to be a one-input NAND gate.

ANSWER 2
First of all, note that there are really only four inputs and three unique outputs for this function, since input E is always 1 and outputs GHI are always 0. The only real outputs are F, plus the groups JK and LM.

Since the other 27 input combinations haven’t been specified, we can take the output values associated with all of them as “don’t care.”

The output F is simply the inversion of input C.

The output JK is high only when A is high or D is low.

The output LM is high except when B is low and C is high.

Therefore, the entire function can be realized with a total of five gates: 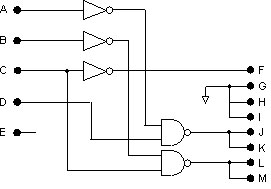 PROBLEM 3
Quick history quiz: Who were the three companies who collaborated to create the initial standard for the Ethernet LAN?

ANSWER 3
The original 10-Mbps Ethernet standard was jointly developed by Digital Equipment Corp. (DEC), Intel, and Xerox. It was released in November 1980, and was commonly referred to as “DIX Ethernet.”

PROBLEM 4
What was the name of the wireless network protocol on which Ethernet was based? Where was it developed?

ANSWER 4
The multiple access with collision detection protocol that Ethernet uses was based on a radio protocol developed at the University of Hawaii. It was known as the “ALOHA protocol.”