The answers to the Circuit Cellar 272 Engineering Quotient are now available. The problems and answers are listed below.

Problem 1—Why does the power dissipation of a Darlington transistor tend to be higher than that of a single bipolar transistor in switching applications?

Problem 2—Suppose you have some 3-bit data, say, grayscale values for which 000 = black and 111 = white. You have a display device that takes 8-bit data, and you want to extend the bit width of your data to match.

Answer 2—One clever trick is to repeat the bits you have as many times as necessary to fill the output field width. For example, if the 3-bit input value is ABC, the output value would be ABCABCAB. This produces the following mapping, which interpolates nicely between full black and full white (see Table 1). Note that this mapping preserves the original bits; if you want to go back to the 3-bit representation, just take the MSBs and you have the original data.

Problem 3—Can an induction motor (e.g., squirrel-cage type) be used as a generator?

Answer 3—Believe it or not, yes it can.

An induction motor has no electrical connections to the rotor; instead, a magnetic field is induced into the rotor by the stator. The motor runs slightly slower than “synchronous” speed—typically 1725 or 3450 rpm when on 60 Hz power.

If the motor is provided with a capacitive load, is driven at slightly higher than synchronous speed (1875 or 3750 rpm), and has enough residual magnetism in the rotor to get itself going, it will generate power up to approximately its rating as a motor. The reactive current of the load capacitor keeps the rotor energized in much the same way as when it is operating as a motor. 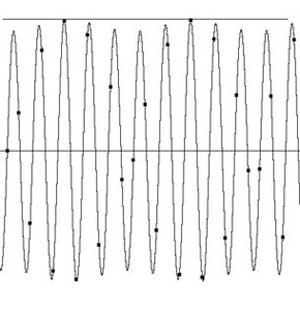 Problem 4—In Figure 1, why does this reconstruction of a 20-kHz sinewave sampled at 44.1 kHz show ripple in its amplitude?

Answer 4—The actual sampled data, represented by the square dots in the diagram, contains equal levels of Fsignal (the sine wave) and Fsample-Fsignal (one of the aliases of the sinewave). Any reconstruction filter is going to have difficulty passing the one and eliminating the other, so you inevitably get some of the alias signal, which, when added to the desired signal, produces the “modulation” you see.

In the case of a software display of a waveform on a computer screen (e.g., such as you might see in software used to edit audio recordings), they’re probably using an FIR low-pass filter (sin(x)/x coefficients) windowed to some finite length. A shorter window gives faster drawing times, so they’re making a tradeoff between visual fidelity and interactive performance. The windowing makes the filter somewhat less than brick-wall, so you get the leakage of the alias and the modulation.

In the case of a real audio D/A converter, even with oversampling you can’t get perfect stopband attenuation (and you must always do at least some of the filtering in the analog domain), so once again you see the leakage and modulation.

In this example, Fsignal = 0.9×Fnyquist, so Falias = 1.1×Fnyquist and Falias/Fsignal = 1.22. To eliminate the visible artifacts, the reconstruction filter would need to have a slope of about 60dB over this frequency span, or about 200 dB/octave.