Problem 1—The classic two-transistor astable multivibrator is shown below. Typically, R2 and R3 have at least 10 times the value of R1 and R4. This circuit oscillates, with Q1 and Q2 turning on alternately. From the point in time in a cycle where Q1 first switches on, describe what happens until Q2 switches on.

Answer 1—Right before the moment Q1 switches on, C1 is charged to VCC – VBE, with its left end positive, and the left end of C2 has just reached +VBE. The right end of C2 is being held at VCE(SAT) by Q2.

Problem 2—What determines the time of one half-cycle of the oscillation? Does this depend on VCC?

Answer 2—The time of the half-cycle described previously is the time that it takes the right end of C1 to charge from –(VCC – (VBE + VCE(SAT))) to +VBE.

Now, keep in mind that the capacitor is charging “toward” +VCC, but it gets halted by the B-E junction of Q2 at +VBE. This charging is occuring at a rate determined by the time constant C1 × R2, and we’re basically interested in the time that it takes to move halfway from its starting value to its final value. This works out to –ln(0.5), or 0.693 times the R-C time constant.

As long as VCC >> VBE, the time does not depend on VCC. That isn’t to say, however, that VCC can be arbitrarily large. If it exceeds the reverse-breakdown voltage of the transistors’ B-E junctions, current will flow and perturb the timing.

Problem 3—Recently, a different circuit appeared on the web, shown below. Again, R2 and R3 are significantly larger than R1 and R4. The initial reaction of one observer was that this circuit can’t work, because there’s no DC bias path for either transistor. Is this assessment correct? 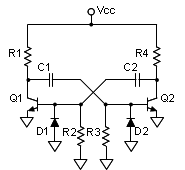 Answer 3—No, it isn’t. This circuit can oscillate just fine. Again, look at how C1 charges and discharges.

If C1 starts out discharged, it will charge through R1 and the B-E junction of Q2. This current will turn on Q2, holding its collector at ground (really VCE(SAT)) and preventing Q1 from turning on.

However, as C1 reaches full charge, the current through it decays below a level that will keep Q2 turned on. When it starts to turn off, its collector voltage rises, which also forces current into Q1’s base through C2. As Q1 begins to turn on, it pulls its collector low, which also pulls the base of Q2 lower, emphasizing its turn-off. The circuit quickly “snaps” to the other state, with Q1 on and Q2 off. C1 is discharged through Q1 and D2 at the same time that C2 begins charging through R4 and Q1’s B-E junction.

Problem 4—What role do R2 and R3 play in this circuit?

Question 5—Does the timing of this circuit depend on VCC? If not, what does it depend on?

Therefore, the primary determinant of the half-cycle time period (in addition to the R-C time constant) is the current transfer ratio, or hFE of each transistor. When the base current drops to a value of 1/hFE of the collector current, the transistor begins to turn off.

Since both currents scale in the same way with VCC, it has no direct effect on the timing. There is only a secondary effect if the value of hFE changes with the value of the collector current.