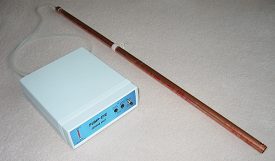 A hose connects the Pump-Eye sensor unit to a copper pipe. The pipe gets fastened to the side of the sump pit.

The Pump-Eye is a flexible system comprised of three electronic units: a sensor unit, a base unit, and an Ethernet unit. Let’s take a look at each unit.

Click to enlarge. The base and Ethernet units are optional. There are five ways to set up the Pump-Eye system without having to make any software changes.

The Ethernet unit can connect to either the sensor unit or the base unit via an RS-232 connection. I can place the Ethernet unit in the most convenient location for connecting to an uninterruptible power supply (UPS) and network. The Ethernet unit receives commands from the unit to which it’s attached. It then sends syslog messages to a syslog server so that pump cycles can be time stamped and counted. A record is kept of the pump’s run times. The Ethernet unit can also send me an e-mail or text message regarding conditions that require immediate attention (e.g., high water levels and a loss of AC power).

The sensor and base units feature Freescale MC9S08GT60 microcontrollers. They communicate with each other via 2.4-GHz ZigBee transceivers based on a Freescale MC13192 SARD board using IEEE 802.15.4 MAC soft- ware. The sensor unit monitors the sump pump’s AC power and its 9-V back-up battery.

You can nullify the effect of a change in ambient pressure if you use a gauge pressure sensor to measure pressure relative to ambient pressure. The formula then becomes P = rg∆h. You can assume that the mass density of water and gravity are constants, so the pressure will be proportional to a change in the water’s height. The sensor unit measures this pressure with a Freescale MPXM2010GS temperature-compensated gauge pressure sensor. The pressure is then converted to a percentage of normal water levels observed in the sump pit.

I tried placing a hose in the sump pit to sense the water level, but I quickly discovered that it wasn’t too reliable. This was probably because of the surface tension of the water clinging to the inside of the thin hose (5/64 inches in diameter). Therefore, I decided to use a 0.5 inches in diameter copper pipe as a sensor interface. The ratio of the area affected by surface tension to the total area is less significant with the larger diameter. I bought a length 0.125 inches in diameter brass pipe to use as a nipple for the hose that connects the MPXM2010GS to the cop- per pipe. I soldered the brass pipe to a standard 0.5 inch copper cap in which I had drilled a hole. The cap is soldered to the top of the copper pipe.

The copper pipe solved the problem of holding the open end of the hose at a fixed height, and it also alleviated my concerns about dirt clogging the thin hose. A plastic clamp screwed to the side of the plastic sump pit holds the pipe in place. I had originally placed the pipe to the bottom of the sump pit, but I found a negative pressure developing in it after numerous pump cycles. I concluded that this was the result of scavenging around the bottom of the pipe because of water currents caused by the pump. Keeping the end of the pipe at the height of the low water level pre- vented this from happening.