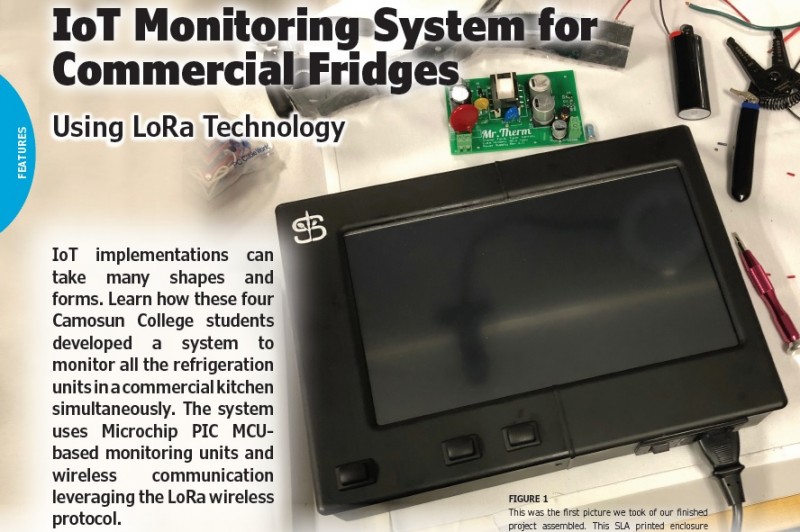 IoT implementations can take many shapes and forms. Learn how these four Camosun College students developed a system to monitor all the refrigeration units in a commercial kitchen simultaneously. The system uses Microchip PIC MCU-based monitoring units and wireless communication leveraging the LoRa wireless protocol.

While one of our team members was working as the chef of a hotel in Vancouver, more than once he’d arrive at work to find that the hotel’s refrigeration equipment had failed overnight or over the weekend, and that thousands of dollars of food had become unusable due to being stored at unsafe temperatures. He always saw this as an unnecessary loss—especially because the establishment had multiple refrigeration units and ample space to move product around. In this IoT age, this is clearly a preventable problem.

For our Electronics & Computer Engineering Technologist Capstone project, we set forth to design a commercial refrigeration monitoring system that would concurrently monitor all the units in an establishment, and alert the chefs or managers when their product was not being stored safely. This system would also allow the chef to check in on his/her product at any time for peace of mind (Figure 1). 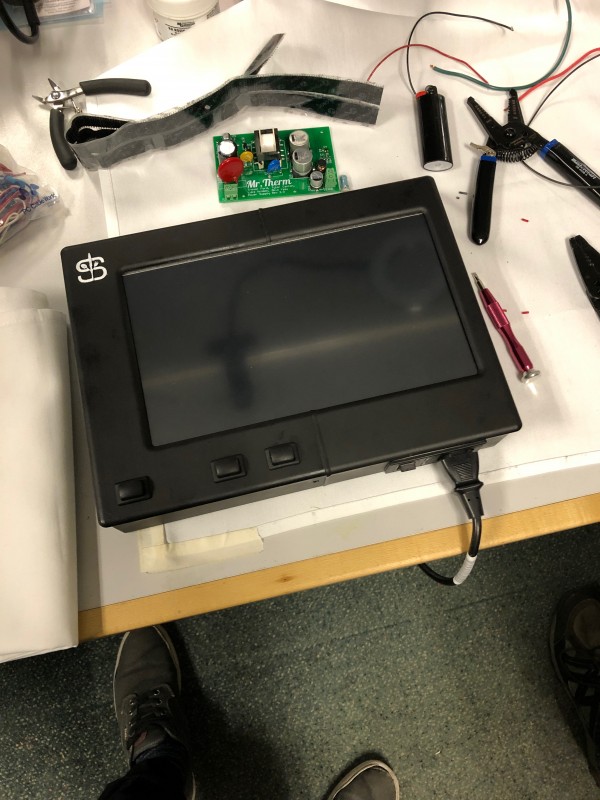 Figure 1
This was the first picture we took of our finished project assembled. This SLA printed enclosure houses our 10.1″ LCD screen, a Raspberry Pi Model 3B and custom designed PCB.

We began with some simple range testing using RFM95W LoRa modules from RF Solutions, to see if we could reliably transmit data from inside a steel box (a refrigerator), up several flights of stairs, through concrete walls, with electrical noise and the most disruptive interference: hollering chefs. It is common for commercial kitchens to feel like a cellular blackout zone, so reliable communication would be essential to our system’s success.

We designed our main unit to be powered and controlled by a Raspberry Pi 3B (RPi) board. The RPi communicates with an RFM95W LoRa transceiver using Serial Peripheral Interface (SPI). This unit receives temperature data from our satellite units, and displays the temperatures on a 10.1″ LCD screen from Waveshare. A block diagram of the system is shown in Figure 2. We decided to go with Node-RED flow-based programming tool to design our GUI. This main unit is also responsible for logging the data online to a Google Form. We also used Node-RED’s “email” nodes to alert the users when their product is stored at unsafe temperatures. In the future, we plan to design an app that can notify the user via push notifications. This is not the ideal system for the type of user that at any time has 1,000+ emails in their inbox, but for our target user who won’t allow more than 3 or 4 to pile up it has worked fine. 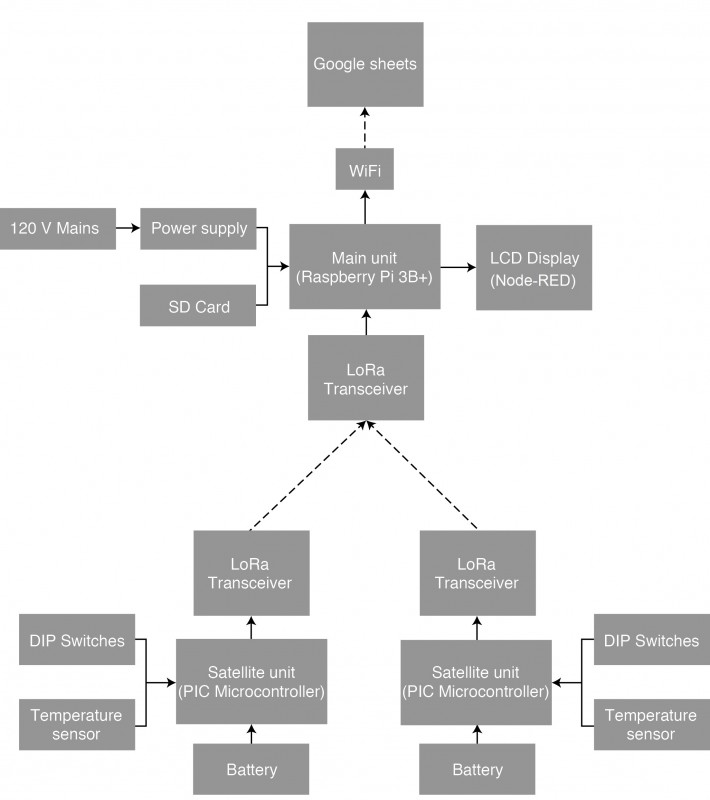 Figure 2
The main unit can receive temperature data from as many satellite units as required. Data are stored locally on the Raspberry Pi 3B, displayed using a GUI designed by Node-RED and logged online via Google Sheets.

We designed an individual prototype (Figure 3) for each satellite monitoring unit, to measure the equipment’s temperature and periodically transmit the data to a centralized main unit through LoRa communication. The units were intended to operate at least a year on a single battery charge. These satellites, controlled by a Microchip Technology PIC24FJ64GA704 microcontroller (MCU), were designed with an internal Maxim Integrated DS18B20 digital sensor (TO-92 package) and an optional external Maxim 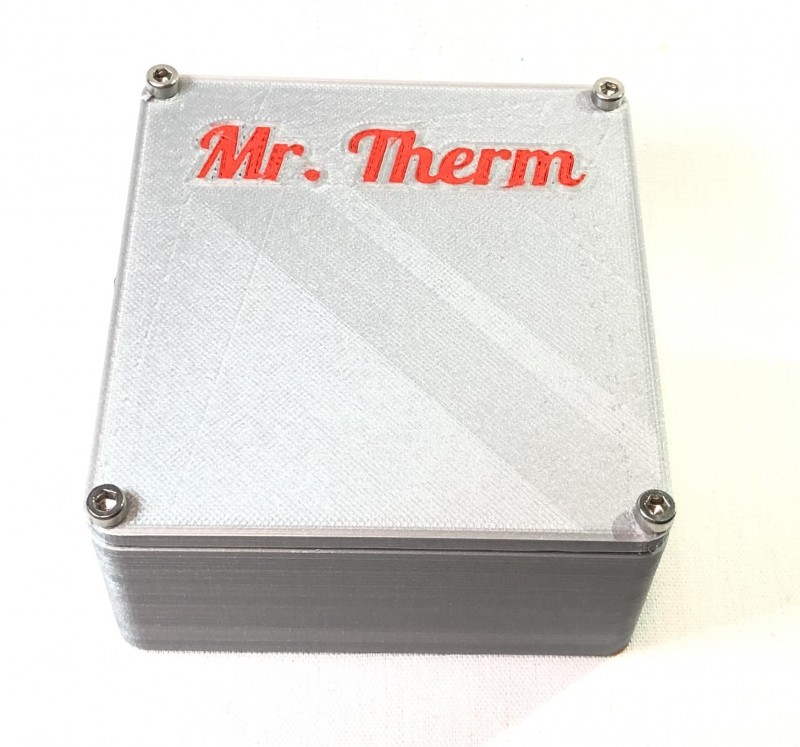 Figure 3
This enclosure houses the electronics responsible for monitoring the temperatures and transmitting to the main unit. These were 3D printed on Ultimaker 3 printers.

All our boards were designed using Altium Designer 2017 and manufactured by JLCPCB. We highly recommend JLCPCB for PCB manufacturing. On a Tuesday we submitted our order to the website, and the finished PCB’s were manufactured, shipped, and delivered within a week. We were amazed by the turnaround time and the quality of the boards we received for the price ($2 USD / 10 PCB). 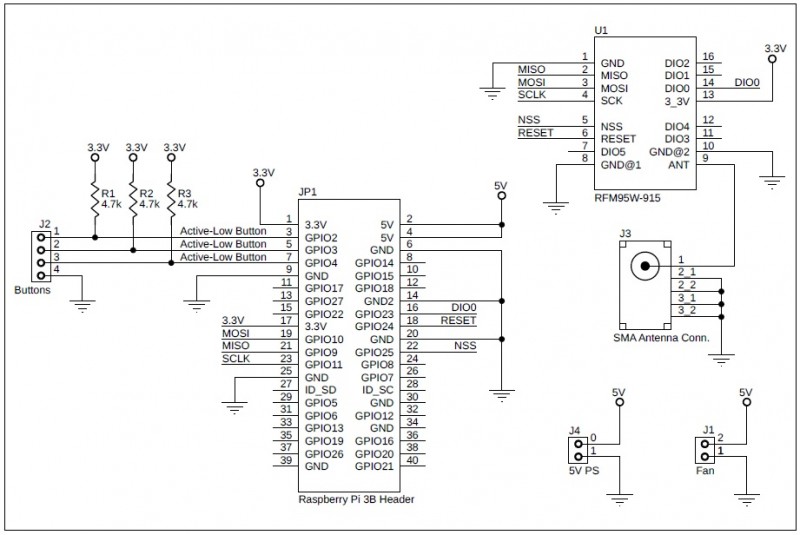 Figure 4
The main unit PCB’s role is simply to allow the devices to communicate with each other. This includes the RFM95W LoRa transceivers, RPi, LCD screen and a small fan

Main Unit Hardware: As shown in Figure 4, our main board’s purpose is communicating with the RPi and the LCD. We first had to select an LCD display for the main unit. This was an important decision, as it was the primary human interface device (HID) between the system and its user. We wanted a display that was around 10″—a good compromise between physical size and readability. Shortly after beginning our search, we learned that displays between 7″ and 19″ are not only significantly more difficult to come by, but also significantly more expensive. Thankfully, we managed to source a 10.1″ display that met our budget from robotshop.com. On the back of the display was a set of female header pins designed to interface with the first 26 pins of the RPi’s GPIO pins. The only problem with the display was that we needed access to those same GPIO pins to interface with the rest of our peripherals. 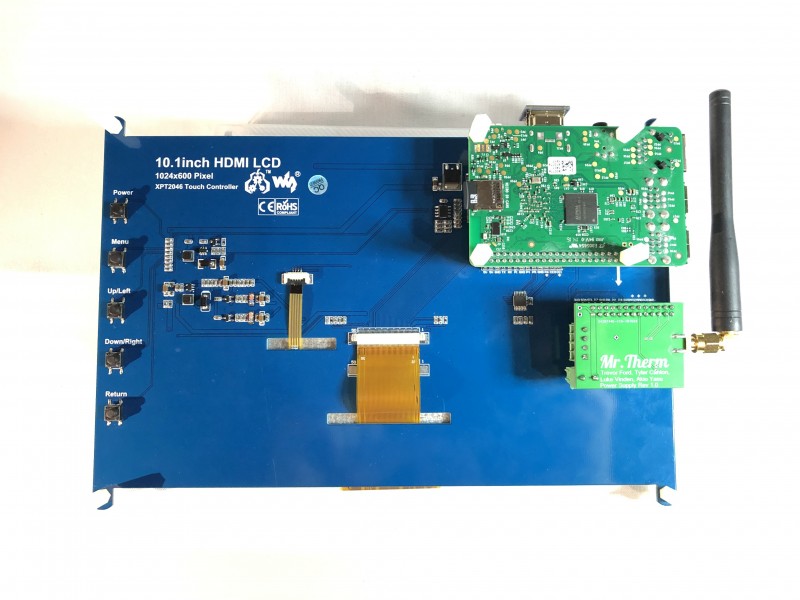 Figure 5
Our main board, labeled Mr. Therm, was designed to attach directly to the LCD screen headers. RPi pins 1-26 share the same connectivity as the main board and the LCD.

We initially planned on fixing this problem by placing our circuit board between the RPi and the display, creating a three-board-stack. Upon delivery and initial inspection of the display, however, we noticed an undocumented footprint that was connected to all the same nets directly beneath the female headers. We quickly decided to abandon the idea of the three-board-stack and decided instead to connect our main board to that unused footprint in the same way the RPi connects to display (Figure 5). This enabled us to interface all three boards, while maintaining a relatively thin profile. The main board connects four separate components to the rest of the circuit. It connects the RFM95W transceiver to the RPi, front panel buttons, power supply and a small fan.
…