Advantech has announced its new generation of wireless connectivity: the Edge Intelligence Server EIS-D210 series. As smart cities and industry 4.0 deployment installs millions of IoT sensors and devices, wireless communications has become the fastest growing sector and wireless networks have been part of every application. As a result, the task of remotely managing distributed devices becomes more complex.

To echo market requirements, Advantech EIS-D210 series is powered by an Intel Celeron processor N3350 and has LoRa/Wi-Fi/Bluetooth and WISE-PaaS/EdgeSense edge intelligence and sensing software built-in. It is also pre-integrated with Microsoft Azure IoT Edge and AWS Greengrass to extend cloud intelligence to edge devices and enable real-time decisions at the edge. Advantech EIS-D210 is an integrated solution from the edge to the cloud and simplifies IoT application deployment. It’s well suited for applications in smart factory, smart energy and intelligent agriculture applications that need wireless sensor network management. 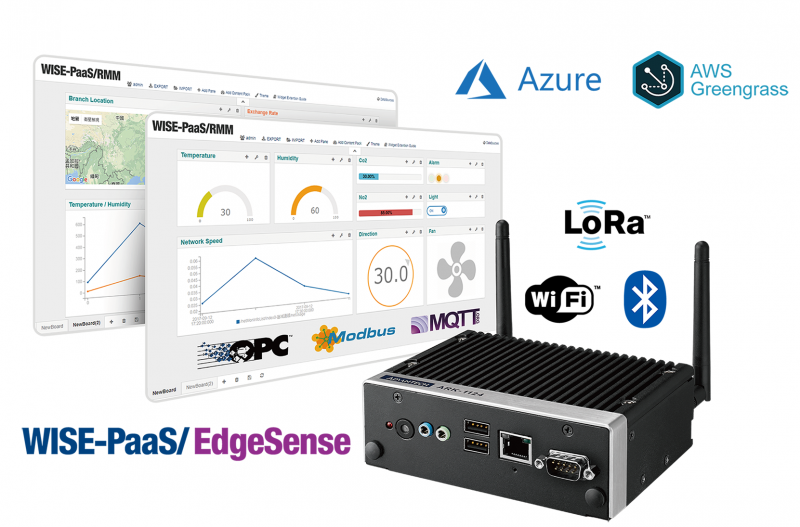 EIS-D210 series is also pre-integrated with Azure IoT Edge and AWS Greengrass, ensuring that IoT devices can respond quickly to local events, interact with local resources, operate with intermittent connections, and minimize the cost of transmitting IoT data to the cloud. Furthermore, after data modeling and machine learning with data, results can be pushed back to edge (IoT Edge/ Greengrass) to provide data prediction for IoT applications.

EIS-D210W (Wi-Fi/Bluetooth) became available at end of April and EIS-D210L (LoRa) will become available in June.