I improved Remin’s protocol by setting up the link software so that timing constraints on the IR receiver AGC were guaranteed to be met. It turns out that there are several types of IR reciever, some of which are better at short data bursts, while others are better for sustained data. I chose a Vishay TSOP34156 for its good sustained data characteristics, minimal burst timing requirements, and reasonable data rate. The system I build works solidly at 4800 baud over IR with 5 characters of overhead/packet (start token, transmitter number, 2 char checksum , end token). It works with increasing packet loss up to 9000 baud.

Here is the receiver circuit. 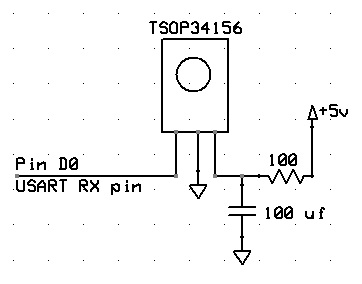 The RC circuit acts a low-pass filter on the power to surpress spike noise and improve receiver performance. The RC circuit should be close to the receiver. The range with a 100 ohm resistor is at least 3 meters with the transmitter roughly pointing at the receiver, and a packet loss of less then 0.1 percent. To manage burst length limitations there is a short pause between characters, and only 7-bit characters are sent, with two stop bits. The 7-bit limit means that you can send all of the printing characters on the US keyboard, but no extended ASCII. All data is therefore sent as printable strings, NOT as raw hexidecimal.