Would you like to incorporate an electronic compass in a consumer product you’re designing or a personal device you’re constructing? If so, you’ll do well to understand as much as possible about the differences between various sensors and how certain forms of interference can affect their accuracies.

Mark Pedley of Freescale Semiconductor has an article in Circuit Cellar 265 (August 2012) on these topics. An abridged version of his article follows. Pedley writes:

Whenever a new high-volume consumer electronics market develops, the semiconductor companies are never far behind, providing excellent components at surprisingly low prices. The market for sensors in consumer products is a recent example. It all started with an accelerometer used to select between portrait and landscape display orientations and then, with the addition of a magnetometer, evolved into the electronic compass (eCompass) used to align street maps to the smartphone’s geographic heading or to enable augmented reality overlays. As a result, high-volume pricing for smartphone accelerometer and magnetometer sensors is now less than $1 each.

It is important to check the accelerometer datasheet for the “0-g offset accuracy” which is the output when the accelerometer is in 0-g freefall. Since this value is a constant additive error on each accelerometer channel, it adds a bias in the calculated tilt angles, so look for accelerometers where this parameter does not exceed 50 mg.

The magnitude of the earth’s geomagnetic field is typically about 50 µT with a horizontal component that varies over the earth’s surface, from a maximum of about 40 µT down to 0 at the geomagnetic poles. If an eCompass is required to operate in horizontal geomagnetic fields down to 10 µT (in arctic Canada, for example) with a noise jitter of ±3°, then a back-of-the-envelope calculation indicates that a magnetometer with a maximum noise level of 0.5 µT is needed.

Similar sensors are supplied by Asahi Kasei (AKM), Kionix, STMicroelectronics, and other manufacturers. Your best strategy is to go to the manufacturers’ websites and make a list of those that provide samples in single units or low-volume packs of up to five devices. With a bit of luck, you may be able to get both the accelerometer and magnetometer sensors for free. Add a handful of decoupling capacitors and pull-up resistors and you should be well within the $5 component cost.

Each reader has a preferred microcontroller to read the raw data from the two sensors and implement the eCompass. This article assumes the microcontroller provides an I2C bus to interface to the sensors, supports floating-point operations whether natively or through software emulation libraries, and has a few spare bytes of program and data memory…

Once you’ve selected your sensors, the next step is to design the accelerometer and magnetometer daughterboard with I2C bus connection to the microcontroller. Reference schematics for the MMA8451Q and MAG3110 are provided in the sensor datasheets and reproduced in Figure 1. 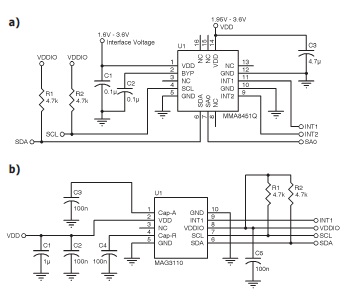 Don’t waste any time rotating the accelerometer or magnetometer packages to align their x-, y-, and z-sensing directions to each other since this will be  fixed later in software. But do ensure the sensor board will not be mounted in the immediate vicinity of any ferromagnetic materials since these will produce a constant additive magnetic field termed the “hard-iron field.” The most common ferromagnetic materials are iron, steel, ferrite, nickel, and cobalt. Non-ferromagnetic materials are all safe to use (e.g., aluminum, copper, brass, tin, silver, and gold).

The calibration process described later enables the estimation and software subtraction of any hard-iron field, but it’s good practice to minimize hard iron interference at the design stage. Remember, a current trace will create a cylindrical magnetic field that falls off relatively slowly with the inverse of distance, so place the magnetometer as far away from high current traces as possible. A 0.1-A current trace at 10-mm distance will produce a 2-µT magnetic field, four times our 0.5-µT error budget, only reducing to 0.5 µT at a 40-mm distance. More detailed layout guidance is provided in Freescale Semiconductor’s application note AN4247: “Layout Recommendations for PCBs Using a Magnetometer Sensor.”

The equations and C software in Listing 1 use the “aerospace,” or “x-North y-East z-Down,” coordinate system depicted in Photo 1. 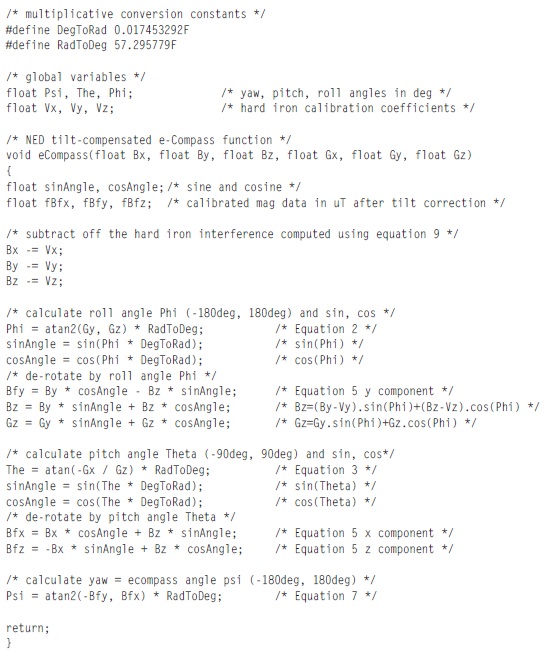 This defines the initial eCompass orientation to be where the x-axis points north, the y-axis points east, and the z-axis points downwards. The three orientation angles, roll (ϕ), pitch (θ), and compass heading, or yaw (ψ)—are defined as clockwise rotations about the positive x, y, and z axes— respectively. Photo 1 also shows the earth’s gravitational vector which points downward with magnitude of 1 g or 9.81 ms-2 and the earth’s geomagnetic field vector, which points downward from horizontal (in the northern hemisphere) by the inclination angle δ to give a horizontal component B0cosδ and a downward component B0sinδ. 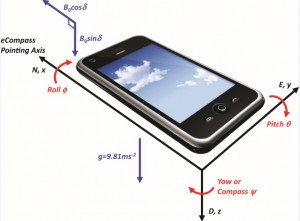 Based on how your eCompass housing will be held, you should be able to assign the compass-pointing direction or x-axis, the downward or z-axis, and the y-axis, which should point to the right to complete a right-handed coordinate system.

You now need to align the sensor data to the aerospace coordinate system. As with all work with magnetometers, this should be performed on a wooden table well away from any laboratory power supplies or steel furniture. Place the eCompass flat and upright so the z-axis points downward and is aligned with gravity. Check that the accelerometer z-axis reads approximately 1 g and the x- and y-axes are near 0. Invert the eCompass so its z-axis points upward and check that the z-axis now reads approximately –1 g. Repeat with the x- and y-axes pointing downward and then upward and check that the x- and  y-axis accelerometer readings are near 1 g and –1 g, respectively. It’s not important if the accelerometer readings are a few tens of mg away from the required reading since all you’re doing here is correcting for gross rotations of the sensor packages and the sensor daughterboard in multiples of 90°. Any needed correction will be unique for your board layout and mounting orientation but will be no more complicated than “swap the x- and y-accelerometer channels and negate the z-channel reading.” Code this accelerometer axis mapping into your software and don’t touch it again.

Figure 2 may help explain this visually. The accelerometer sensor measures both gravity and linear acceleration and, in the absence of any linear acceleration (as is the case when sitting on a desk), the magnitude of the accelerometer reading will always equal 1 g, and therefore, lie on the surface of a 1-g sphere, irrespective of the orientation. 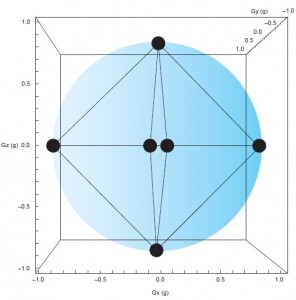 The six measurements  lie on the vertices of an octahedron inscribed within the 1-g sphere and the axis mapping simply rotates and reflects the octahedron as needed until the accelerometer channels are correctly aligned. 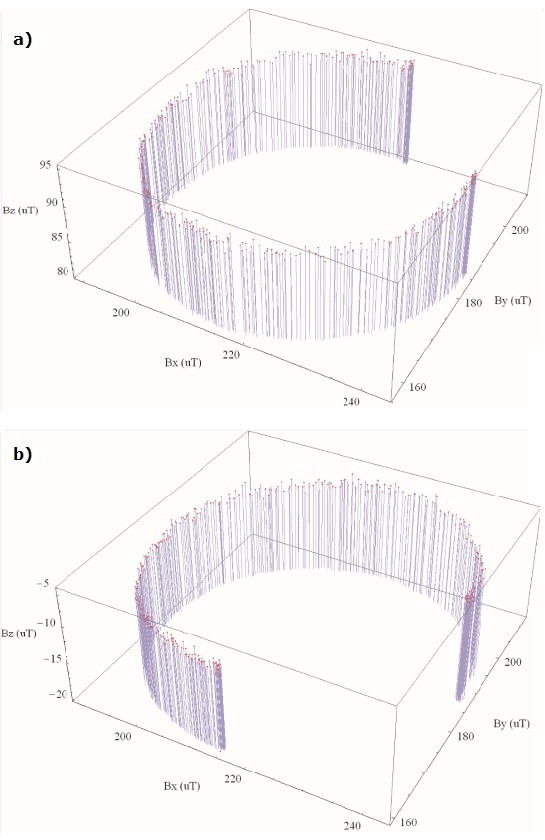 A lot can be learned by closely looking at the measurements in Figure 3. The x- and y-magnetometer measurements lie on a circle with radius of approximately 25 µT enabling us to deduce that the horizontal geomagnetic field is approximately 25 µT. But the measurements are offset from zero by the magnetic “hard iron” interfering field, which results from both permanently magnetized ferromagnetic materials on the circuit board and from a zero-field offset in the magnetometer sensor itself. Consumer sensor manufacturers long ago realized it was pointless to accurately calibrate their magnetometers when their target market is smartphones, each with a different hard-iron interfering field. The magnetometer sensor offset is, therefore, calibrated together with the circuit board hard-iron magnetic field. For now, simply note that the x and y components of the hard iron offset have values of approximately 215 µT and 185 µT. A simple method to determine all three hard-iron components is described later.

Refer to the complete article for information about calculating the roll and pitch angles and determining the compass heading angle.

Mark Pedley has a Physics degree from Oxford University and now works on sensor fusion algorithms for Freescale Semiconductor in Tempe, Arizona.