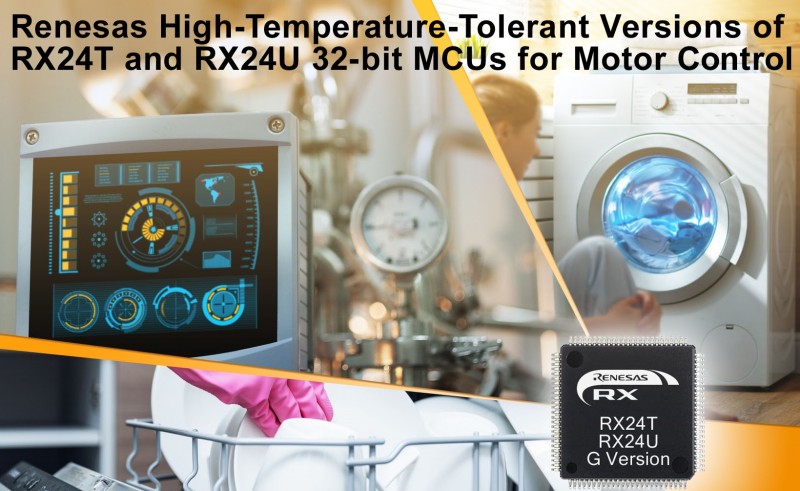 Renesas Electronics has announced the expansion of its RX24T and RX24U Groups of 32-bit MCUs to include new high-temperature-tolerant models for motor-control applications that require an expanded operating temperature range. The new RX24T G Version and RX24U G Version support operating temperatures ranging from −40°C to +105°C, while maintaining the high speed, high functionality and energy efficiency of the RX24T and RX24U MCUs.

As device form factors shrink, the heat challenge is growing for motor-control applications. In industrial machinery and office equipment, as well as home appliances that handle hot air and heated water, circuit boards are increasingly being mounted in high-temperature locations. In the case of home appliances such as dishwashers or induction hotplates in particular, demand for designs with larger interior capacity or heating areas is increasing, which restricts the space available for circuit boards.

Software can be developed using the RX24T and RX24U CPU cards combined with the 24 V Motor Control Evaluation Kit which enables developers to create motor control applications in less time. The 32-bit RX24T and RX24U features a maximum operating frequency of 80 MHz. It is equipped with peripheral functions for motor control such as timers, A/D converter, and analog circuits that enable efficient control of two brushless DC motors by a single chip. Renesas has shipped 10 million units of the popular RX24T and RX24U Groups since their launch two years ago. With the addition of the G versions, all 32-bit RX MCU family products for motor-control applications now support operating temperature from −40°C to +105°C, extending the scalability of the RX Family and providing system manufacturers a rich and scalable lineup to choose from.