The Great Plains Super Launch (GPSL) is an annual gathering of Amateur Radio high-altitude ballooning enthusiasts from the United States and Canada. The 2012 event was held in Omaha, Nebraska from June 7th to the 9th and was sponsored by Circuit Cellar. Around 40 people from nine states and the Canadian province of Saskatchewan attended Friday’s conference and around 60 attended the balloon launches on Saturday.

Amateur Radio high-altitude ballooning (ARHAB) involves the launching, tracking, and recovery of balloon-borne scientific and electronic equipment. The Amateur Radio portion of ARHAB is used for transmitting and receiving location and other data from the balloon to chase teams on the ground. The balloon is usually a large latex weather balloon, though other types such as polyethylene can also be used. A GPS unit in the balloon payload calculates the location, course, speed, and altitude in real time, while other electronics, usually custom-built, handle conversion of the digital data into radio signals. These signals are then converted back to data by the chase teams’ receivers and computers. The balloon rises at about 1000 feet per minute until the balloon pops (if it’s latex) or a device releases the lifting gas (if it’s PE). Maximum altitudes are around 100,000 feet and the flight typically takes two to three hours. 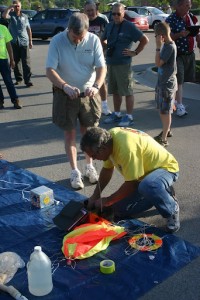 Prepping for the launch – Photo courtesy of Mark Conner

On Thursday the 7th, the GPSL attendees visited the Strategic Air and Space Museum near Ashland, about 20 minutes southwest of Omaha. The museum features a large number of Cold War aircraft housed in two huge hangars, along with artifacts, interactive exhibits, and special events. The premiere aircraft exhibit is the Lockheed SR-71 Blackbird suspended from the ceiling in the museum’s atrium. A guided tour was provided by one of the museum’s volunteers and greatly enjoyed by all.

Friday featured the conference portion of the Super Launch. Presentations were given on stabilization techniques for in-flight video recordings, use of ballooning projects in education research, lightweight transmitters for tracking the balloon’s flight, and compressed gas safety. Bill Brown showed highlights from his years of involvement in ARHAB dating back to his first flights in 1987. The Edge of Space Sciences team presented on a May launch from Coors Field in Denver for “Weather and Science Day” prior to an afternoon Colorado Rockies game. Several thousand students witnessed the launch, which required meticulous planning and preparation. 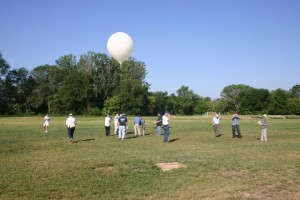 Saturday featured the launch of five balloons from a nearby high school early that morning. While the winds became gusty for the last two launches, all of the flights were successfully released into a brilliant sunny June sky. All five of the flights were recovered without damage in the corn and soybean fields of western Iowa between 10 and 25 miles from launch. The SABRE team from Saskatoon, Saskatchewan took the high flight award, reaching over 111,000 ft during their three-hour flight.

The view from one of the balloons. Image credit: “Project Traveler / Zack Clobes”.

The 2013 GPSL will be held in Pella, Iowa, on June 13-15. Watch the website superlaunch.org for additional information as the date approaches.