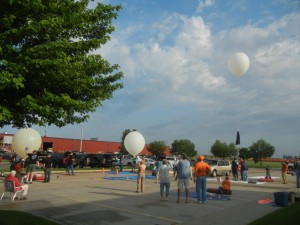 Pella, IA — Spectators, visitors and participants alike all erupted into cheerful applause and exclamation after watching the weather balloons launch successfully from the launch site at Vermeer on Saturday. The onlookers observed these hydrogen/helium filled balloons rising into the air until they faded from sight, approaching extremely high altitudes.  The launch was the start of an hour and a half that the balloon spent ascending, all the way into the Earth’s ozone layer.  Another thirty five or forty minutes later the balloon popped and parachutes back to Earth.

The balloons enable us to explore the region of the atmosphere called “near space”, which is above 60,000 ft., but below the accepted altitude of space- 328,000 ft. Cosmic radiation of near space is 100 times greater than it is at sea level. The large balloons are attached to a payload, which contains GPS tracking and various sensors. The payloads contain beacons which emit radio signals. Many of the payloads in this year’s super launch were made by students dedicated to exploring near space.

This sort of active involvement is what PENS strives for. PENS is Pella’s Exploring Near Space program. Mike Morgan, the president of PENS, enjoys and commits to getting kids involved and interested in science and technologies.

“The only thing that goes higher than our balloons are astronauts and satellites. The launch of a radio balloon isn’t something you see or do every day,” Morgan said.
The payload of the balloon also includes a camera so that you can get the view from the edge of space, along with other valuable information that the payload and sensors give. They are used to test things such as barometer, pressure, temperature, UV radiation and humidity. All of these are important factors in the study of aero science.

Bill Brown, founding father of Amateur Radio, participated in the Great Plains Super Launch on Saturday. From Alabama, Brown flew the first high altitude balloon with an amateur radio and video camera in 1987. Brown has flown 400 balloons in 20 states, but each launch presents new information and stimulating challenges. Brown explains that from the edge of space, “You can see the black sky and the curve of the Earth”.

For Nick Stich, the balloon that he launched was his 188th balloon. Balloons from all over the country were launched last Saturday, including radio balloons from Nebraska Stratospheric Amateur Radio, Edge of Space Sciences, DePauw University, and Iowa High Altitude Balloon. PENS, coordinated by Jim Emmert, hosted the conference for near space explorers and enthusiasts.

By Renee Van Roekel
The Chronicle

For more information on the super launch or radio ballooning, visit www.superlaunch.org .

This article was originally published by The Pella Chronicle on June 22, 2013, and is posted here with the permission of its publisher.