Fuzzy logic doesn’t necessarily need lots of horsepower. Many embedded applications that use more traditional control schemes can benefit from the use of fuzzy logic. Back in 1995, Jim Sibigtroth explained how to keep things simple and speedy.

After describing basic fuzzy logic concepts, this article explains how to implement fuzzy-inference algorithms in a general-purpose embedded controller. The examples, written in assembly language, are for an MC68HC11, but the algorithms could be adapted for any general-purpose microcontroller. Code size is surprisingly small and execution time is fast enough to make fuzzy logic practical even in small embedded applications.

Perhaps because of its strange sounding name, fuzzy logic is still having trouble getting accepted as a serious engineering tool in the United States. In Japan and Europe, the story is quite different. The Japanese culture seems to respect ambiguity, so it is considered an honor to have a product which includes fuzzy logic. Japanese consumers understand fuzzy logic as intelligence similar to that used in human decisions.

In the US, engineers typically take the position that any control methodology without precise mathematical models is unworthy of serious consideration. In light of all the fuzzy success stories, this position is getting hard to defend.

I think the European attitude is more appropriate. It recognizes fuzzy logic as a helpful tool and uses it. They regard the difficulties of the nomenclature as a separate problem. Since the term “fuzzy” has negative connotations, they simply don’t advertise that products include fuzzy logic. 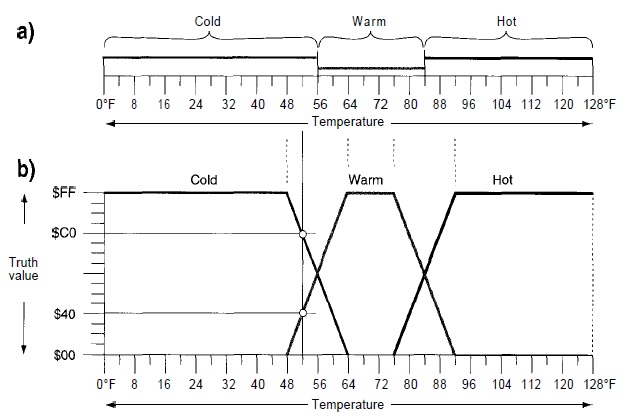 Figure l: Traditional sets are simply defined by their endpoints. Fuzzy sets add a second dimension to express the degree of truth (on the y-axis), which allows sets to be defined with gradual boundaries between false and true.

Curiously, the results produced by fuzzy-logic systems are as precise and repeatable as those produced by respected traditional methods. Instead of indicating lack of precision, the term “fuzzy” more accurately refers to the way real-world sets have gradual boundaries.

When we say “the temperature is warm,” there is not a specific temperature at which this expression goes from completely false to completely true. Instead, there is a gradual or fuzzy boundary, which requires a nonbinary description of truth. In fact, the fuzzy logic definition for a set contains more information than the conventional binary definition of a set.

In conventional systems, the range of an input parameter is broken into sets that begin and end at specific values. For example, a temperature range described as warm might include the temperatures 56-84°F (see Figure la). The trouble with this thinking is that the temperature 84.01”F suddenly stops being considered warm. This abrupt change is not the way humans think of concepts like “temperature is warm.”

Read the entire article, which appeared in Circuit Cellar 56, 1995.