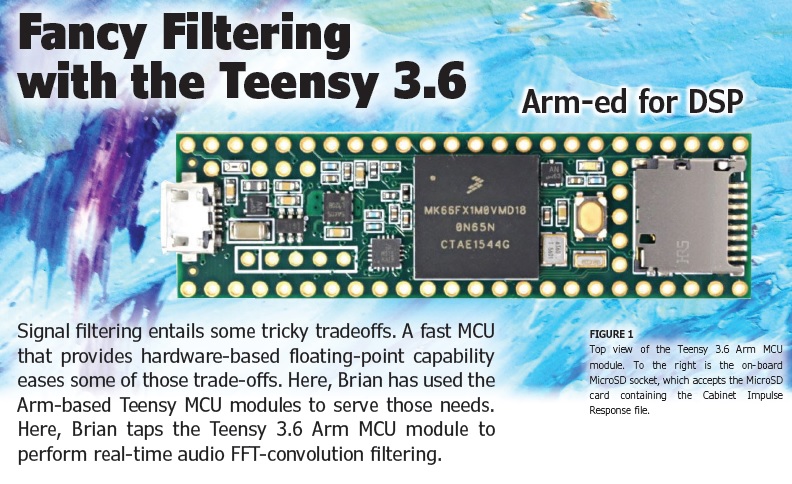 Signal filtering can be done either with analog circuitry or digitally using a microcontroller (MCU) coupled with analog-to-digital and digital-to-analog converters. The strength of analog filters is that they can cover wide frequency ranges. If they are designed entirely with passive components, the range of signal amplitudes that can be handled is limited only by the voltage rating of the various capacitors that are used. Additionally, they don’t add much, if any, noise to the signal. However, a limitation of analog filters is that they can’t provide a sharp cut-off rate at their corner frequency (Fc), unless you cascade many filter sections and use close-tolerance components.

If you need high-performance filters, then digital filters might be the way to go. You can design very sharp low-pass, high-pass, notch and band-pass filters using digital techniques, if you use high-resolution ADC/DACs to convert the analog signal into the digital domain and (optionally) back to the analog domain. However, the MCU that you use must be fast and, in general, feature hardware-based floating-point operations. Two years ago, I discovered a line of Arm-based MCU modules that fill the bill nicely.

In Circuit Cellar issues 324 (July 2017) and 325 (August 2017), I described a digital guitar amplifier based upon the Teensy 3.2 Module, which contains an Arm Cortex-M4 MCU. The analog guitar signal was converted to a 16-bit digital signal for processing, and then back to an analog signal for power amplification, by an NXP Semiconductor SGTL5000 Codec contained on the PJRC Audio Shield. This project was made possible largely due to the extremely powerful Audio library provided by the manufacturer of the Teensy modules. This library consists of many audio functions, all of which operate using DMA transfers and interrupt service routines (that is, as a background task). The sampling is done at CD quality (44,100 samples/s at 16-bit resolution).

That project involved many different audio functions—some from the Teensy Audio Library, and some that I wrote myself. The filtering I used for the project was in the form of a 5-band parametric equalizer (EQ). This consists of five blocks of band-pass filters, each one centered on a specific frequency in the audible range. Such an EQ is basically a sophisticated “tone control” for the guitar signal. While most of the other guitar signal processing was done within the Teensy 3.2 MCU, using the Audio library, the 5-band parametric EQ was handled by a DSP block contained within the SGTL5000 Codec on the Teensy Audio Shield.

After finishing that project, I became interested in more sophisticated filtering algorithms that could be performed by the Arm MCU found on the Teensy modules. The Teensy Audio Library routines work with all the Arm-based MCUs in the Teensy module family (except the lowest-cost LC model). The Audio library contains three types of digital filters:

The Biquad algorithm executes quickly, and its coefficients are easy to calculate on the fly, which makes it easy to change the filter bandwidth and Fc quickly. Finite impulse response (FIR) filters can provide much better filter characteristics, if you configure them with enough “taps”. However, as you increase the number of taps used, the execution time increases proportionately.

All the above filters use 16-bit, fixed-point math (Arm Cortex M4 DSP instructions using the Q15 data format). This is fast and reasonably accurate, but not enough to provide very sharp filter “skirts”. When you attempt to cascade several sections of such filters, you start to see the limitations in the precision of the fixed-point math.

Figure 1
Top view of the Teensy 3.6 Arm MCU module. To the right is the on-board MicroSD socket, which accepts the MicroSD card containing the Cabinet Impulse Response file. 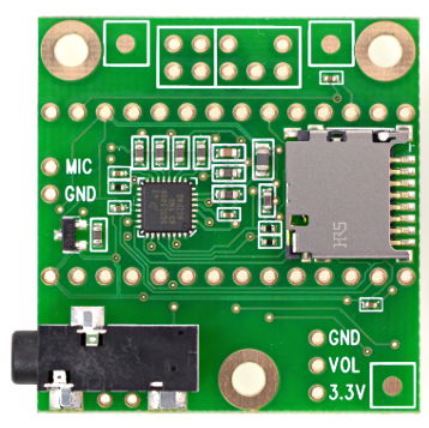 Figure 2
Top view of the Teensy Audio Shield. The two rows of 14 holes are fitted with header pins that plug directly into the Teensy 3.6 MCU module. All interconnections between the two boards are via these 28 pins.

Although I have used digital filters in FIR and Biquad configurations, prior to this project I wasn’t familiar with the term “convolution” filtering. As part of my music/recording hobby, I had encountered the term convolution regarding:

Convolution reverberation processors are not relevant to this discussion. However, guitar amplifier cabinet simulation is basically a fancy way of saying that you are simulating the exact frequency/phase response of a guitar amplifier and its loudspeaker(s), mounted in a specific cabinet, with the recording microphone oriented a specific way.

The “shape” of the frequency response curve of any given guitar amplifier/speaker combination will not be a “flat” response over the useful range of guitar notes. Instead it will consist of many small peaks and dips over the frequency range of interest. These “aberrations” provide the distinctive sound of interest to the musician. To some extent, one can simulate a given guitar amplifier/speaker by using a multiband parametric equalizer (EQ) and fiddling with it until it sounds the way you know the actual amplifier/speaker sounds. However, experts in the field learned that they could go one step further using the following method.

Rather than feeding an actual guitar signal into the amplifier/speaker cabinet, they feed it a short pulse, with rise/fall times as fast as possible. This short pulse is called a “finite-impulse signal.” The sound emitted by the speaker cabinet is then picked up by a professional-quality microphone, amplified, converted to digital form and stored in a file. This file represents the FIR of the guitar amplifier/speaker cabinet. I admit that I don’t have the best understanding of the mathematical “magic” involved here, but suffice it to say that all the frequency response “personality” of the guitar amplifier/speaker cabinet is contained in the finite-impulse-response (FIR) file that has been collected. The higher the sample rate used to record the impulse, the better the simulation, and the larger this FIR file will be.

Once you have this FIR file, you can use it to provide the coefficients needed for a digital FIR filter. If you pass your “raw” guitar signal through this FIR filter, it will be modified in virtually the same way that it would be if it were sent out to the specifically modeled guitar amplifier/speaker cabinet. Effectively, you can digitally record a “raw” guitar signal, which, when converted back to analog and listened to, will sound as if you were listening to it “live,” through the specific guitar amplifier/speaker that you have modeled. The FIR filter routine does what’s called a “convolution” of the guitar’s time-domain signal with the FIR array of coefficients—which is also time-domain data.

Once you absorb the idea behind this simulation technique, it becomes clear that you could implement a complex digital filter to reproduce almost any complex frequency response with this technique. I’m certain that mathematicians and electronics engineers in the communication field discovered and used this technique to design complex filters long before guitar players saw its usefulness. However, it was the guitar cabinet simulation concept that led me to investigate the FIR filtering technique more fully..  …