In this final installment of my four-part mini-series about selecting an oscilloscope, I’ll look at triggering, waveform generators, and clock synchronization, and I’ll wrap up with a series summary.

My previous posts have included Part 1, which discusses probes and physical characteristics of stand-alone vs. PC-based oscilloscopes; Part 2, which examines core specifications such as bandwidth, sample rate, and ADC resolution; and Part 3, which focuses on software. My posts are more a “collection of notes” based on my own research rather than a completely thorough guide. But I hope they are useful and cover some points you might not have otherwise considered before choosing an oscilloscope. 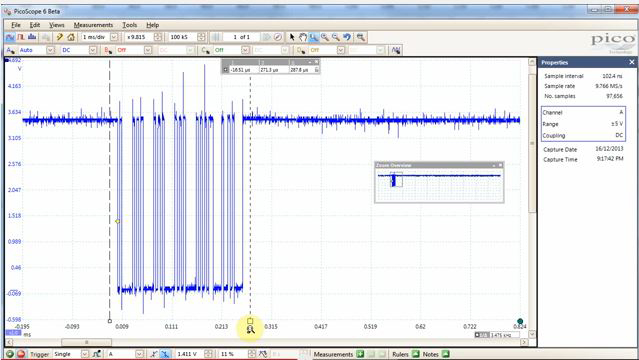 Topic 1: Triggering Methods
Triggering your oscilloscope properly can make a huge difference in being able to capture useful waveforms. The most basic triggering method is just a “rising” or “falling” edge, which almost everyone is (or should be) familiar with.

Whether you need a more advanced trigger method will depend greatly on your usage scenario and a bit on other details of your oscilloscope. If you have a very long buffer length or ability to rapid-fire record a number of waveforms, you might be able to live with a simple trigger since you can easily throw away data that isn’t what you are looking for. If your oscilloscope has a more limited buffer length, you’ll need to trigger on the exact moment of interest.

Before I detail some of the other methods, I want to mention that you can sometimes use external instruments for triggering. For example, you might have a logic analyzer with an extremely advanced triggering mechanism.  If that logic analyzer has a “trigger out,” you can trigger the oscilloscope from your logic analyzer.

On to the trigger methods! There are a number of them related to finding “odd” pulses: for example, finding glitches shorter or wider than some length or finding a pulse that is lower than the regular height (called a “runt pulse”). By knowing your scope triggers and having a bit of creativity, you can perform some more advanced troubleshooting. For example, when troubleshooting an embedded microcontroller, you can have it toggle an I/O pin when a task runs. Using a trigger to detect a “pulse dropout,” you can trigger your oscilloscope when the system crashes—thus trying to see if the problem is a power supply glitch, for example.

If you are dealing with digital systems, be on the lookout for triggers that can function on serial protocols. For example, the Rigol Technologies stand-alone units have this ability, although you’ll also need an add-on to decode the protocols! In fact, most of the serious stand-alone oscilloscopes seem to have this ability (e.g., those from Agilent, Tektronix, and Teledyne LeCroy); you may just need to pay extra to enable it.

Topic 2: External Trigger Input
Most oscilloscopes also have an “external trigger input.”  This external input doesn’t display on the screen but can be used for triggering. Specifically, this means your trigger channel doesn’t count against your “ADC channels.” So if you need the full sample rate on one channel but want to trigger on another, you can use the “ext in” as the trigger.
Oscilloscopes that include this feature on the front panel make it slightly easier to use; otherwise, you’re reaching around behind the instrument to find the trigger input.

Topic 3: Arbitrary Waveform Generator
This isn’t strictly an oscilloscope-related function, but since enough oscilloscopes include some sort of function generator it’s worth mentioning. This may be a standard “signal generator,” which can generate waveforms such as sine, square, triangle, etc. A more advanced feature, called an arbitrary waveform generator (AWG), enables you to generate any waveform you want.

I previously had a (now very old) TiePie engineering HS801 that included an AWG function. The control software made it easy to generate sine, square, triangle, and a few other waveforms. But the only method of generating an arbitrary waveform was to load a file you created in another application, which meant I almost never used the “arbitrary” portion of the AWG. The lesson here is that if you are going to invest in an AWG, make sure the software is reasonable to use.

The AWG may have a few different specifications; look for the maximum analog bandwidth along with the sample rate. Be careful of outlandish claims: a 200 MS/s digital to analog converter (DAC) could hypothetically have a 100-MHz analog bandwidth, but the signal would be almost useless. You could only generate some sort of sine wave at that frequency, which would probably be full of harmonics. Even if you generated a lower-frequency sine wave (e.g., 10 MHz), it would likely contain a fair amount of harmonics since the DAC’s output filter has a roll-off at such a high frequency.

Better systems will have a low-pass analog filter to reduce harmonics, with the DAC’s sample rate being several times higher than the output filter roll-off. The Pico Technology PicoScope 6403D oscilloscope I’m using can generate a 20-MHz signal but has a 200 MS/s sample rate on the DAC. Similarly, the TiePie engineering HS5-530 has a 30-MHz signal bandwidth, and similarly uses a 240 MS/s sample rate. A sample rate of around five to 10 times the analog bandwidth seems about standard.

Having the AWG integrated into the oscilloscope opens up a few useful features. When implementing a serial protocol decoder, you may want to know what happens if the baud rate is slightly off from the expected rate. You can quickly perform this test by recording a serial data packet on the oscilloscope, copying it to the AWG, and adjusting the AWG sample rate to slightly raise or lower the baud rate. I illustrate this in the following video.

Topic 4: Clock Synchronization
One final issue of interest: In certain applications, you may need to synchronize the sample rate to an external device. Oscilloscopes will often have two features for doing this. One will output a clock from the oscilloscope, the other will allow you to feed an external clock into the oscilloscope.

The input frequency of this clock is typically 10 MHz, although some devices enable you to select between several allowed frequencies. If the source of this clock is anything besides another instrument, you may have to do some clock conditioning to convert it into one of the valid clock source ranges.

Summary and Closing Comments
That’s it! Over the past four weeks I’ve tried to raise a number of issues to consider when selecting an oscilloscope. As previously mentioned, the examples were often PicoScope-heavy simply because it is the oscilloscope I own. But all the topics have been relevant to any other oscilloscope you may have.

You can check out my YouTube playlist dealing with oscilloscope selection and review.  Some topics might suggest further questions to ask.

I’ve probably overlooked a few issues, but I can’t cover every possible oscilloscope and option. When selecting a device, my final piece of advice is to download the user manual and study it carefully, especially for features you find most important. Although the datasheet may gloss over some details, the user manual will typically address the limitations you’ll run into, such as FFT length or the memory depths you can configure.