This is Part 2 of my mini-series on selecting an oscilloscope. Rather than a completely thorough guide, it’s more a “collection of notes” based on my own research. But I hope you find it useful, and it might cover a few areas you hadn’t considered.

Topic 1: Analog Bandwidth
Many useful articles online discuss the analog oscilloscope bandwidth, so I won’t dedicate too much time to it. Briefly, the analog bandwidth is typically measured as the “half-power” or -3 dB point, as shown in Figure 1. Half the power means 1/√2 of the voltage. Assume you put a 10-MHz, 1-V sine wave into your 100-MHz bandwidth oscilloscope. You expect to see a 1-V sine wave on the oscilloscope. As you increase the frequency of the sine wave, you would instead expect to see around 0.707 V when you pass a 100-MHz sine wave. If you want to see this in action, watch my video in which I sweep the input frequency to an oscilloscope through the -3 dB point. 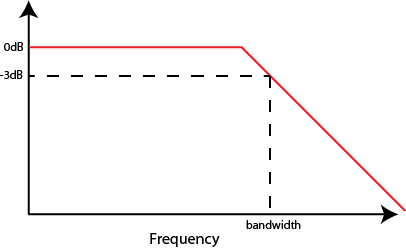 Figure 1: The bandwidth refers to the “half-power” or -3 dB point. If we drive a sine wave of constant amplitude and increasing frequency into the probe, the -3 dB point would be when the amplitude measured in the scope is 0.707 times the initial amplitude.

Unfortunately, you are likely to be measuring square waves (e.g., in digital systems) and not sine waves. Square waves contain high-frequency components well beyond the fundamental frequency of the wave. For this reason the “rule of thumb”  is to select an oscilloscope with five times the analog bandwidth of the highest–frequency digital signal you would be measuring. Thus, a 66-MHz clock would require a 330-MHz bandwidth oscilloscope.

If you are interested in more details about bandwidth selection, I encourage you to see one of the many excellent guides. Adafruit has a blog post “Why Oscilloscope Bandwidth Matters” that offers more information, along with links to guides from Agilent Technologies and Tektronix.

If you want to play around yourself, I’ve got a Python script that applies analog filtering to a square wave and plots the results, available here. Figure 2 shows an example of a 50-MHz square wave with 50-MHz, 100-MHz, 250-MHz, and 500-MHz analog bandwidth. 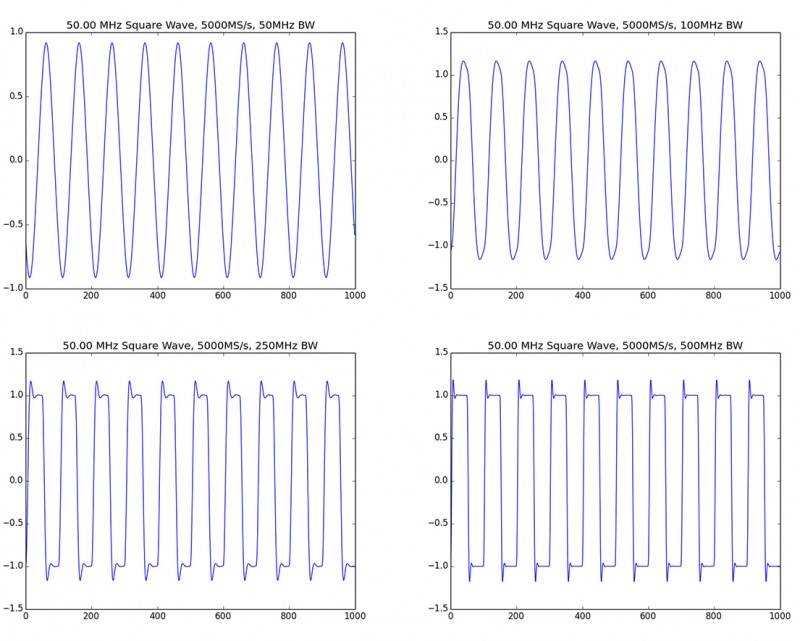 Topic 2: Sample Rate
Beyond the analog bandwidth, oscilloscopes also prominently advertise the sample rate. Typically, this is in MS/s (megasamples per second) or GS/s (gigasamples per second). The advertised rate is nearly always the maximum if using a single channel. If you are using both channels on a two-channel oscilloscope that advertises 1 GS/s, typically the maximum rate is actually 500 MS/s for both channels.

So what rate do you need? If you are familiar with the Nyquist criterion, you might simply think you should have a sample rate two times the analog bandwidth. Unfortunately, we tend to work in the time domain (e.g., looking at the oscilloscope screen) and not the frequency domain. So you can’t simply apply that idea. Instead, it’s useful to have a considerably higher sample rate compared to analog bandwidth, say, a five times higher sample rate. To illustrate why, see Figure 3. It shows a 25.3-MHz square wave, which I’ve sampled with an oscilloscope with 50-MHz analog bandwidth. As you would expect, the signal rounds off considerably. However, if I only sample it at 100 MS/s, at first sight the signal is almost unrecognizable! Compare that with the 500 MS/s sample rate, which more clearly looks like a square wave (but rounded off due to analog bandwidth limitation).

Again, these figures both come from my Python script, so they are based purely on “theoretical” limits of sample rate. You can play around with sample rate and bandwidth to get an idea of how a signal might look.

Topic 3: Equivalent Time Sampling
Certain oscilloscopes have an equivalent time sampling (ETS) mode, which advertises an insanely fast sample rate. For example, the PicoScope 6000 series, which has a 5 GS/s sample rate, can use ETS mode and achieve 200 GS/s on a single channel, or 50 GS/s on all channels.

The caveat is that this high sample rate is achieved by doing careful phase shifts of the A/D sampling clock to sample “in between” the regular intervals. This requires your input waveform be periodic and very stable, since the waveform will actually be “built up” over a longer time interval.

So what does this mean to you? Luckily, many actual waveforms are periodic, and you might find ETS mode very useful. For example, if you want to measure the phase shift in two clocks through a field-programmable gate array (FPGA), you can do this with ETS. At 50 GS/s, you would have 20 ps resolution on the measurement! In fact, that resolution is so high you could measure the phase difference due to a few centimeters difference in PCB trace.

To demonstrate this, I can show you a few videos. To start with, the simple video below shows moving the probes around while looking at the phase difference.

A more practical demonstration, available in the following video, measures the phase shift of two paths routed through an FPGA.

Finally, if you just want to see a sine wave using ETS you can check out the bandwdith demonstration  I referred to earlier in the this article. The video (see below) includes a portion using ETS mode.

Topic 4: ADC Resolution
A less prominently advertised feature of certain oscilloscopes is the ADC bit resolution in the front end. Briefly, the ADC resolution tells you how the analog waveform will get mapped to the digital domain. If you have an 8-bit ADC, this means you have 28 = 256 possible numbers the digital waveform can represent. Say you have a ±5 V range on the oscilloscope—a total span of 10 V. This means the ADC can resolve 10 V / 256 = 39.06 mV difference on the input voltage.

This should tell you one fact about digital oscilloscopes: You should always use the smallest possible range to get the finest granularity. That same 8-bit ADC on a ±1 V range would resolve 7.813 mV. However, what often happens is your signal contains multiple components—say, spiking to 7 V during a load switch, and then settling to 0.5 V. This precludes you from using the smaller range on the input, since you want to capture the amplitude of that 7-V spike.

While the typical ADC resolution seems to be 8 bits for most scopes, there are higher-resolution models too. As mentioned, these devices are permanently in high-resolution mode, so you have to decide at purchasing time if you want a very high sample rate, or a very high resolution. For example, Cleverscope has always advertised higher resolutions, and their devices are available in 10, 12, or 14 bits. Cleverscope seems to sell the “digitizer” board separately, giving you some flexibility in upgrading to a higher-resolution ADC. TiePie engineering has devices available from 8–14 bits with various sample rate options. Besides the FlexRes device I mentioned, Pico Technology offers some fixed resolution devices in higher 14-bit resolution. Some of the larger manufacturers also have higher-resolution devices, for example Teledyne LeCroy has its High Resolution Oscilloscope (HRO), which is a fixed 12-bit device.

Note that many devices will advertise either an “effective” or “software enhanced” bit resolution higher than the actual ADC resolution. Be careful with this: software enhancement is done via filtering, and you need to be aware of the possible resulting changes to your measurement bandwidth. Two resources with more details on this mode include the ECN magazine article “How To Get More than 8 Bits from Your 8-bit Scope” and the Teledyne LeCroy application note “Enhanced Resolution.” Remember that a 12-bit, 100-MHz bandwidth oscilloscope is not the same as an 8-bit, 100-MHz bandwidth oscilloscope with resolution enhancement!

Using the oscilloscope’s fast Fourier transform (FFT) mode (normally advertised as the spectrum analyzer mode), we can see the difference a higher-resolution ADC makes. When looking at a waveform on the screen, you may think that you don’t care at all about 14-bit accuracy or something similar. However, if you plan to do measurements such as total harmonic distortion (THD), or otherwise need accurate information about frequency components, having high resolution may be extremely important to achieve a reasonable dynamic range.

As a theoretical example I’m using my script mentioned earlier, which will digitize a perfect sine wave and then display the frequency spectrum. The number of bits in the ADC (e.g., quantization) is adjustable, so the harmonic component is solely due to quantization error. This is shown in Figure 4. If you want to see a version of this using a real instrument, I conduct a similar demonstration in this video.

Certain applications may find the higher bit resolution a necessity. For example, if you are working in high-fidelity audio applications, you won’t be too worried about an extremely high sample rate, but you will need the high resolution.

Figure 4: In the frequency domain, the effect of limited quantization bits is much more apparent. Here a 10-MHz pure sine wave frequency spectrum is taken using a different number of bits during the quantization process. (CLICK TO ZOOM)

Coming Up
This week I’ve taken a look at some of the core specifications. I hope the questions to ask when purchasing an oscilloscope are becoming clearer! Next week, I’ll be looking at the software running the oscilloscope, and details such as remote control, FFT features, digital decoding, and buffer types. The fourth and final week will delve into a few remaining features such as external trigger and clock synchronization and will summarize all the material I’ve covered in this series.