These are the answers to the EQ questions that appeared in Circuit Cellar 260 (March 2012).

Problem 1—In an RS-232 interface, why is the idle or “mark” level a negative voltage?

Answer 1—RS-232 was developed in the days when people were connecting electromechanical teletypes to telephone lines with modems, and in fact, at that time the design of any equipment connected to a phone line was tightly controlled by the phone company.

The reason RS-232 uses a negative voltage for its idle state is the same reason the phone lines themselves use a negative voltage relative to ground for power—copper wires in long cables potentially exposed to moisture are significantly less likely to corrode if they have a negative DC bias on them.

Problem 2—Similarly, why does the “mark” level correspond to a logical “high” level on the TTL side of the interface?

Answer 2—Again, back in the days when RS-232 was developed, the primary logic families in use were DTL and TTL. Both of these technologies draw significantly less power when a signal is in the high state than in the low state, so the high state is preferred for the inactive state of any signal.

Problem 3—What does the following C function compute? You may assume the input argument is a positive integer. 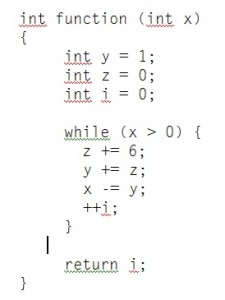 Problem 4—Suppose you are given some calibration constants for a sensor in the form of four-digit hexadecimal (16-bit) integers, and you are told that the format of these numbers is “7 integer bits and 9 fractional bits.” How would you go about converting these constants to floating-point so that you could, for example, work with them in a spreadsheet?

Answer 4—The direct way to convert numbers in an arbitrary fixed-point representation to the equivalent floating-point value is to figure out what the representation for “1.000” would be in the fixed-point notation and then divide the given numbers by that constant.