SEGGER recently launched the embOS-MPU, which is a new variant of its zero interrupt latency real-time operating system (RTOS) that is optimized for minimal memory utilization. Using the microcontroller’s memory protection unit (MPU) or memory management unit (MMU) capabilities, it can protect a system from the potential harm posed by errant threads. 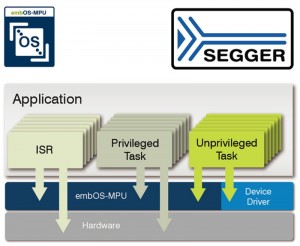 With embOS-MPU, a particular task failure won’t impact the entire system. Using it, you can develop an unlimited number of privileged and unprivileged tasks. The latter receive a set of restricted rights (e.g., memory write access). When an unprivileged task attempts to violate predefined limits or causes a system error (e.g., stack overflow), the task is immediately terminated.

With the embOS-MPU can also install a callback function that is activated if an unprivileged task is terminated. This application-defined routine can take whatever action is necessary when this exceptional condition is triggered. It could log the problem and recover to restore full functionality, degrade system performance, or shut down the entire system in a failsafe manner.