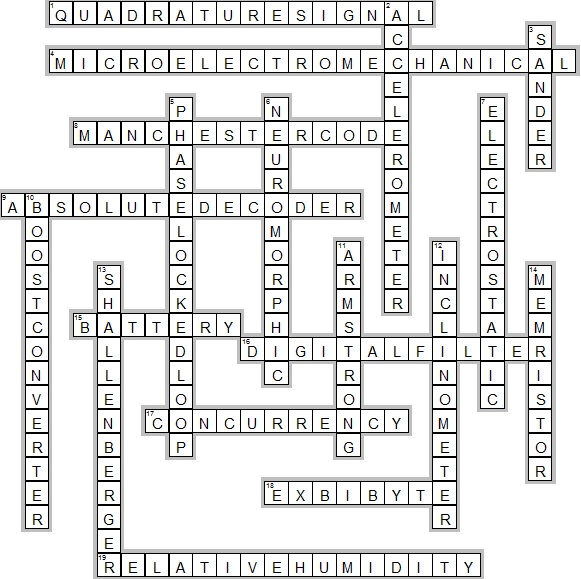 4.     MICROELECTROMECHANICAL—This type of system’s size ranges from 20 µm to 1 mm

9.     ABSOLUTEDECODER—Because these devices have only one track per bit of resolution, they can require large diameters, which gives them a nonvolatile and unique output for each position [two words]

16.   DIGITALFILTER—A piece of software, firmware, or logic circuit that takes a digital data flow as an input and provides a filtered version of this signal on its output [two words]

19.   RELATIVEHUMIDITY—Amount of water vapor in the atmosphere expressed as a percentage of the total amount the air can hold at the current temperature [two words]

2.     ACCELEROMETER—The design in Mark Pedley’s article, “eCompass: Build and Calibrate a Tilt-Compensating Electronic Compass” (Circuit Cellar 265, 2012), was built using one of these

5.     PHASELOCKEDLOOP—This control system generateS an output frequency, which can be either higher or lower than the input, based on a reference input clock [three words]

6.     NEUROMORPHIC—Circuit Cellar’s October’s interviewee, Helen Li, believes this type of computing will solve the contradiction between the limited functions of computing systems and the ever-increasing variety of applications

14.   MEMRISTOR—The functional equivalent of a synapse