Here are the answers to the crossword puzzle in Circuit Cellar 265, August 2012. The issue is now available. 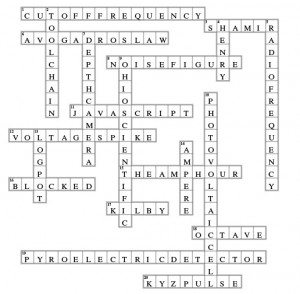 1.     CUTOFFFREQUENCY—The frequency where a filter’s output has fallen by 3 dB from the maximum level that can be achieved through the filter [two words]

3.     SHAMIR—Israeli cryptographer and one of inventors of the RSA algorithm

6.     AVOGADROSLAW—V/n = k, where V is the volume of the gas, n is the amount of substance of the gas, and k is a proportionality constant [two words]

11.   JAVASCRIPT—ECMAScript-approved language that supports a lot of C-structured programming syntax

12.   VOLTAGESPIKE—Lightening or a tripped circuit wire, for example [two words]

16.   BLOCKED—When a software thread relinquishes control of the processor to the operating system

17.   KILBY—American physicist (1923-2005) who worked with Robert Noyce to create the first integrated circuit

18.   OCTAVE—The interval between one musical pitch and another with half or double its frequency

19.   PYROELECTRICDETECTOR—A capacitive sensor that changes its polarization in response to a change in temperature [two words]

20.   KYZPULSE—In a mechanical electrical meter, a pulse that changes state every half rotation of the meter’s disk and represents a quanta of energy [two words]

2.     TOOLCHAIN—Software used to create other software, usually including a text editor, a compiler, a linker, and a debugger

7.     DEPTHCAMERA—Miguel Sanchez’s article, “Image Processing Development” (Circuit Cellar, June 2012), used one of these along with an MCU and bipolar stepper motors to accomplish some computer vision-related tasks [two words]

10.   PHOTOVOLTAICCELL—According to Jeff Bachiochi’s article in this issue, a single one of these is “a translucent sandwich of P-type and N-type material forming a huge diode junction that can be exposed to a light source” [two words]