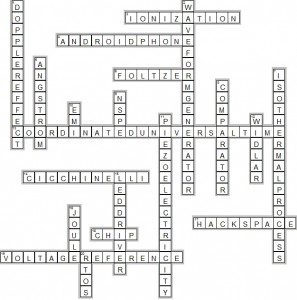 3.     IONIZATION—Occurs when an atom or molecule gains either and positive or negative charge

4.     ANDROIDPHONE—In “Audio-Enhanced Touch Sensors” (Circuit Cellar, May 2012), Matt Oppenheim said one of the stumbling blocks of using this for data collection is that it will try to recharge itself whenever you connect it to a USB port. [two words]

13.   COORDINATEDUNIVERSALTIME—A method of keeping the world in sync [three words]

14.   CICCHINELLI—Circuit Cellar published his book about a commonly used computer programming language in 2010

19.   VOLTAGEREFERENCE—National Semiconductor’s LM385 series is an example of an adjustable one. [three words]

1.     DOPPLEREFFECT—A phenomenon that occurs when a vehicle sounding a siren approaches, passes, and recedes from an observer [two words]

8.     COMPARATOR—A device that compares two voltages or currents and switches its output to indicate which is larger

11.   PIEZOELECTRICITY—Occurs when crystals acquire a charge after being compressed, twisted, or distorted (e.g., quartz)

15.   LEDDRIVER—Circuitry that regulates or provides powers to a light source [two words]

16.   JOULE—Symbolized by 10th letter of the alphabet