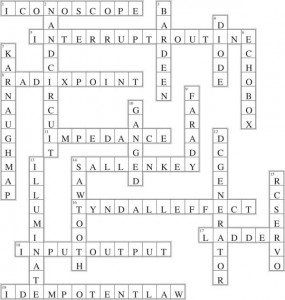 2.     NANDCIRCUIT—Combines two types of functions in a binary circuit with two or more inputs and one output [two words]

6.     ECHOBOX—A device that receives part of a transmitted pulse and transmits it back to the receiver [two words]

10.   GANGED—Tuning that uses a single control to tune two or more circuits

12.   DCGENERATOR—French instrument maker Hippolyte Pixii developed a prototype for this in 1832 [two words]

14.   SAWTOOTH—A waveform with a slow linear rise time and a fast fall time

15.   RCSERVO—An absolute-positioning actuator that is typically limited to a 180° rotation  [two words]