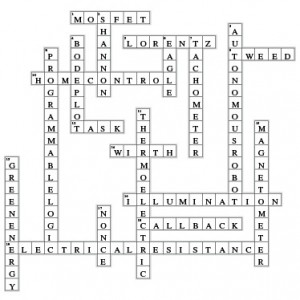 1.     MOSFET—According to Ed Nisley in his Circuit Cellar 265  2012 article, this type of tester characterizes a transistor’s behavior by computing the drain resistance at each combination of measured voltage and current

5.     LORENTZ—Type of force on a charged particle caused by electromagnetic fields

9.     TWEED—Tests your engineering know-how in every issue of Circuit Cellar

12.   TASK—In his article in this issue, Bob Japenga defines this as an instance of a software program that is utilizing CPU resources to accomplish some purpose

18.   CALLBACK—Enables a lower-level software layer to request a higher-level-defined subroutine

2.     SHANNON—Cryptographer known as the “father of information theory”

4.     BODEPLOT—Represents a system’s gain and phase as a frequency function  [two words]

7.     TACHOMETER—A device that can help you determine revolutions per minute

11.   THERMOELECTRIC—Type of cooling that relies on the Peltier effect to alter heat between two types of materials

17.   NONCE—Available for a limited time