Pervasive Displays recently announced that Japan-based TOPPAN Printing Co. is using its low-power e-paper display (EPD) module in a batteryless RFID EPD tag. Operating off harvested RF energy, the new solution enables you to update a device’s EPD and RFID tag data at the same time with a smartphone or NFC reader/writer. 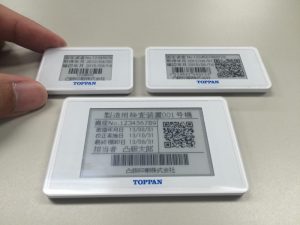 Pervasive Displays’s low-power  Aurora Mb EPD modules require as little as 2 mA current during display update operations. This means display updates can be powered purely by harvested energy from NFC, RFID, solar, or thermal sources. Unlike traditional active matrix LCDs, e-paper technology is bistable, which means power isn’t required to maintain an image on the tag. A backlight is unncessary.