James Lyman, an engineer with degrees in Aerospace, Electrical Engineering, and Systems Design, has more than 35 years of design experience but says he was “dragged” over the past decade into using surface-mount devices (SMD) in his prototypes. He had a preference for using through-hole technology whenever possible.

“The reasons are simple,” he says in an article appearing in the June issue of Circuit Cellar magazine. “It’s much easier to use traditional components for building and reworking prototype circuits than it is to use wire to make the connections. Plus, the devices are large and easy to handle. But time and technology don’t leave anyone at peace, so my projects have gradually drifted toward surface-mount design.”

In his article, Lyman shares the techniques he developed for designing prototypes using SMD components. He thought sharing what he learned would make the transition less daunting for other designers.

This accompanying photo shows one of his completed circuit board designs. 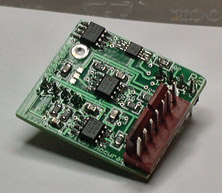 Lyman’s techniques developed out of trial and error. One trial involved keeping small components in place during the building of his prototype.

“When I built my first few surface-mount boards, I did what so many amateurs and technicians do. I carefully placed each minute component on the circuit board in its correct position, and then spent several minutes playing ‘SMD hockey,’ ” Lyman says. “With nothing holding the component in place, I’d take my soldering iron and heat the pad component while touching the solder to the junction. Just as the solder was about to melt, that little component would turn into a ‘puck’ and scoot away. Using the soldering iron’s tip as a ‘hockey stick,’ I’d chase the little puck back to its pads and try again, which was maddening. Finally, I’d get a drop of solder holding one end of the puck in place, usually with the other end sticking away from its pad. Then I could reheat the solder joint while holding the puck and position it correctly. I would have to start over with the next component, all the while yearning for that wonderful old through-hole technology. 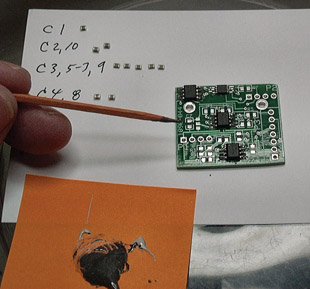 “It slowly occurred to me that I needed something to hold each part in place while soldering—something that would glue them in place. Commercial houses glue the components down on the boards and then use a wave soldering machine, which does all the soldering at once. That’s exactly what I started doing. I use J-B Weld, a common off-the-shelf epoxy.”

Using an easy-to-get epoxy is just one of the tips in Lyman’s article. For the rest, check out his full article in the June issue of Circuit Cellar.