Countless technological innovations have certainly made the earliest personal  computers long obsolete. As Circuit Cellar contributors Oscar Vermeulen and Andrew Lynch note:  “Today there is no sensible use for an 8-bit, 64-KB computer with less processing power than a mobile phone. “

Nonetheless, there exists a “retrocomputing”  subculture that resurrects older computer hardware and software in DIY projects. It may be sentimental, but it can also be instructive.

In their two-part series beginning in July in Circuit Cellar, Vermeulen and Lynch focus on that strain of retrocomputing that involves designing and building your own computer system from a “bag of chips” and a circuit board.

Part 1 describes a simple single-board CP/M design that uses just one high-capacity RAM chip and is compatible with a serial or PC terminal. 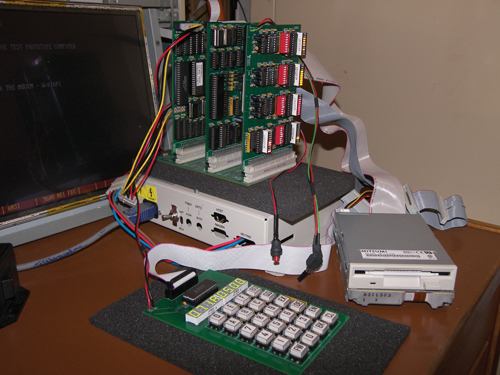 Here is a homebrew N8VEM system with a single-board computer (SBC) and disk/IDE card plugged into the ECB backplane.

“It is easy to create a functional computer on a little circuit board—considering all the information now available on the Internet,” Vermeulen and Lynch say in Part 1.  “These retro machines may not have much practical use, but the learning experience can be tremendously valuable.”

Some “homebrewed” computer creations  can be “stunningly exotic,” according to Vermeulen and Lynch, but most people build simple machines.

“They use a CPU and add RAM, ROM, a serial port, and maybe an IDE interface for mass storage. And most hobbyists run either BASIC (e.g., the 1980s home computers) or use a “vintage” OS such as CP/M.

“Running CP/M, in fact, is a nice target to work toward. A lot of good software ensures your homebrew computer can do something interesting once it is built. As the predecessor of MS-DOS, CP/M also provides a familiar command-line interface. And it is simple. A few days of study are enough to port it to your circuit board.”

But some Circuit Cellar readers may want more from a retrocomputing experience than a one-off project.  In that case, there are online resources that can help, according to the authors.

“Working on your own, it can become progressively more difficult to take the next steps (i.e., building graphics subsystems or using exotic processors) or to add state-of-the-art microcontrollers to create ‘Frankenstein’ systems (i.e., blends of old and new technology that can do something useful, such as automate your home).”

Part 1 of their article introduces a solid online resource for taking retrocomputing to the next level–the N8VEM Google group, which provides a single-board CP/M design meant to engage others. 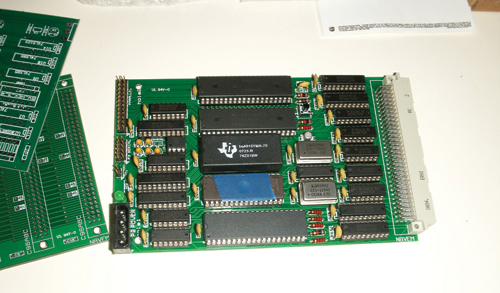 This is the N8VEM in its $20 stand-alone incarnation.

“N8VEM is not about soldering kits. It is about joining in, trying new things, and picking up skills along the way. These skills range from reading schematics to debugging a computer card that does not operate as intended. The learning curve may be steep at times, but, because the N8VEM mail group is very active, expert help is available if or when you get stuck….

“As the novelty of designing a simple single-board computer (SBC) wears off, you may prefer to focus your energy on exploring graphics systems or ways to hook up 8-bit machines on the Internet. Or, you may want to jump into systems software development and share your experiences with a few hundred others.

“Retrocomputing is not always backward-facing. Making  ‘Frankenstein’ systems by adding modern Parallax Propeller chips or FPGAs to old hardware is a nice way to gain experience in modern digital electronics, too.”

For more, check out the July issue of Circuit Cellar for Part 1 of their series. In Part 2, scheduled for publication in August,  the authors provide a technical look at the N8VEM’s logic design. It also provides a starting point for anyone interested in exploring the N8VEM’s system software and expansion hardware, according to Vermeulen and Lynch.