In a thorough introduction to the technology, Tom Cantrell presented a garage door monitoring design. He explained:

The W5500 (see Figure 1) starts with a standard 10/100 Ethernet interface (i.e., MAC and PHY) but then goes further with large RAM buffers (16-KB transmit and 16-KB receive) and hardware TCP/IP protocol processing. I discovered WIZnet’s first chip, the  W3100, way back in 2001. Of course by now, as with all things  silicon, the new W5500 is better, faster, and  lower cost. But the concept is still exactly  the same: “Internet enable” applications by  handling the network chores in hardware so  the application microcontroller doesn’t have to do it in software. 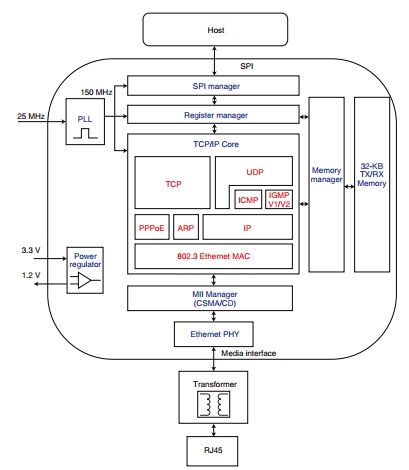 Figure 1: The WIZnet W5500 is an Ethernet chip with a difference—large RAM buffers and hardware TCP/IP processing that make it easy for any microcontroller to go online.

The large RAM buffers help decouple the  microcontroller from network activity. In a  recent project (see my article, “Weatherize  Your Embedded App,” Circuit Cellar 273,  2013), I used the RAM to receive an entire  10-KB+ webpage, completely eliminating the  need for the microcontroller to juggle data at  network speed. And any of the 32-KB on-chip  RAM that isn’t needed for network buffering  is free for general-purpose use, a big plus for  typically RAM-constrained microcontrollers. The other major WIZnet hardware assist  is TCP/IP processing using IP addresses, sockets, and familiar commands including OPEN, CONNECT, SEND, RECEIVE, DISCONNECT.  The high-level interface to the network frees  up microcontroller cycles and code space that  would otherwise be needed for a software TCP/IP stack.

Cantrell goes on to present his design for a ‘Net-connected garage door monitoring system.

For prototyping, check out the WIZnet  ioShield (see Photo 1), which is a baseboard  for the WIZ550io that includes an SD card  socket. There are ioShields for different  platforms (e.g., Arduino, LaunchPad,  mbed, etc.), and with 0.1” headers they are  breadboard friendly. 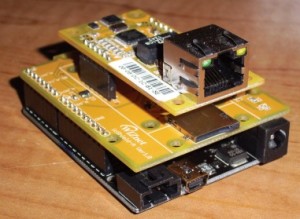 Photo 1: If you want a fancy server with lots of eye candy, a microSD card is the way to go. The WIZnet ioShields include the card socket and are available for various platforms. The Arduino version is shown here.

Cantrell prototyped a client version of what he calls his “garage  door ‘Thing’ using an Arduino  and a WIZ550io connected to Exosite (see Photo 2). 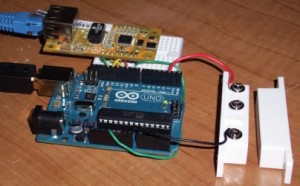 Photo 2: A prototype of the client version of my garage “Thing”

Wondering how to get two clients (e.g., ) to interact with each other? Cantrell used Exosite.

Over on the Exosite website, after signing up for a  free “Developer” account, it was a quick and easy mainly point-and-click exercise to configure my “Device,” “Data,”  “Events,” and “Alerts” (see Photo 3).  As a client, there’s no need to keep the “Thing’s”  Ethernet link powered all the time. Data only needs to  be sent when the garage door opens or closes, but I also  recommend sending a periodic heartbeat just in case. My  garage door monitor will only generate a minute or two  of network activity (i.e., door state changes and hourly  heartbeats) per day, so there’s opportunity for significant  energy savings compared to a 24/7 server. 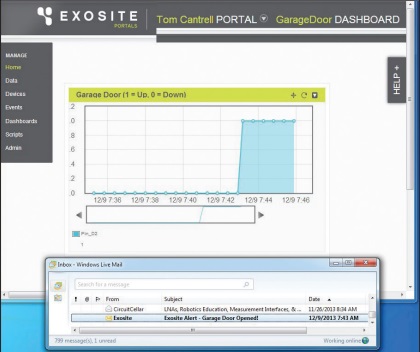 It only takes a few minutes to set up a simple Exosite dashboard including an e-mail alert. I can “see“ my garage door without getting off the couch and now, via Exosite, from the farthest reaches of the web.

You can download the entire article,  “Connect the Magic: An Introduction to the WIZnet W550,” for free to learn about Cantrell’s garage door control system built with a WIZnet and an Arduino Uno.