I’ve had good cause to be reading and perusing a few old Circuit Cellar articles every day for the past several weeks. We’re preparing the upcoming 25th anniversary issue of Circuit Cellar, and part of the process is reviewing the company’s archives back to the first issue. As I read through Circuit Cellar 143 (2002) the other day I thought, why wait until the end of the year to expose our readers to such intriguing articles? Thousands of engineers and students across the globe have become familiar with our magazine, and most of them are unfamiliar with the early articles. It was in those articles that engineers set the foundation for the development of today’s embedded technologies.

Over the next few months, I will highlight some past articles here on CircuitCellar.com as well as in our print magazine. I encourage long-time readers to revisit these articles and projects and reflect on their past and present use values. Newer readers should not regard them as simply historical documents detailing outdated technologies. Not only did the technologies covered lead to the high-level engineering you do today, many of those technologies are still in use.

The article below is about Thomas Black’s “BatMon” battery monitor for RC applications (Circuit Cellar 143, 2002). I am leading with it simply because it was one of the first I worked on.

For years, hobbyists have relied on voltmeters and guesswork to monitor the storage capacity of battery packs for RC models. Black’s precise high-tech battery monitor is small enough to be mounted in the cockpit of an RC model helicopter. Black writes:

I hate to see folks suffer with old-fashioned remedies. After three decades of such anguish, I decided that enough is enough. So what am I talking about? Well, my focus for today’s pain relief is related to monitoring the battery packs used in RC models. The cure comes as BatMon, the sophisticated battery monitoring accessory shown in Photo 1.

Photo 1: The BatMon is small enough to fit in most RC models. The three cables plug into the model’s RC system. A bright LED remotely warns the pilot of battery trouble. The single character display reports the remaining capacity of the battery.

Today, electric model hobbyists use the digital watt-meter devices, but they are designed to monitor the heavy currents consumed by electric motors. I wanted finer resolution so I could use it with my RC receiver and servos. With that in mind, a couple of years ago, I convinced my firm that we should tackle this challenge…My solution evolved into the BatMon, a standalone device that can mount in each model aircraft (see Figure 1). 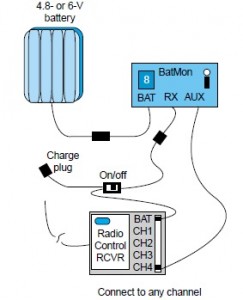 Figure 1: Installation in an RC model is as simple as plugging in three cables. Multiple point measurements allow the system to detect battery-related trouble. Voltage detection at the RC receiver even helps detect stalled servos and electrical issues.

This is not your typical larger-than-life Gotham City solution. It’s only 1.3″ × 2.8″ and weighs one ounce. But the BatMon does have the typical dual persona expected of a super hero. For user simplicity, it reports battery capacity as a zero to nine (0% to 90%) level value. This is my favorite mode because it works just like a car’s gas gauge. However, for those of you who must see hard numbers, it also reports the actual remaining capacity—up to 2500 mAH—with 5% accuracy. In addition, it reports problems associated with battery pack failures, bad on/off switches, and defective servos. A super-bright LED indicator flashes if any trouble is detected. Even in moderate sunlight this visual indicator can be seen from a couple hundred feet away, which is perfect for fly-by checks. The BatMon is compatible with all of the popular battery sizes. Pack capacities from 100 mAH to 2500 mAH can be used. They can be either four-cell or five-cell of either NiCD or NiMH chemistries. The battery parameters are programmed by using a push button and simple menu interface. The battery gauging IC that I used is from Dallas Semiconductor (now Maxim). There are other firms that have similar parts (Unitrode, TI, etc.), but the Dallas DS2438 Smart Battery Monitor was a perfect choice for my RC application (see Figure 2). 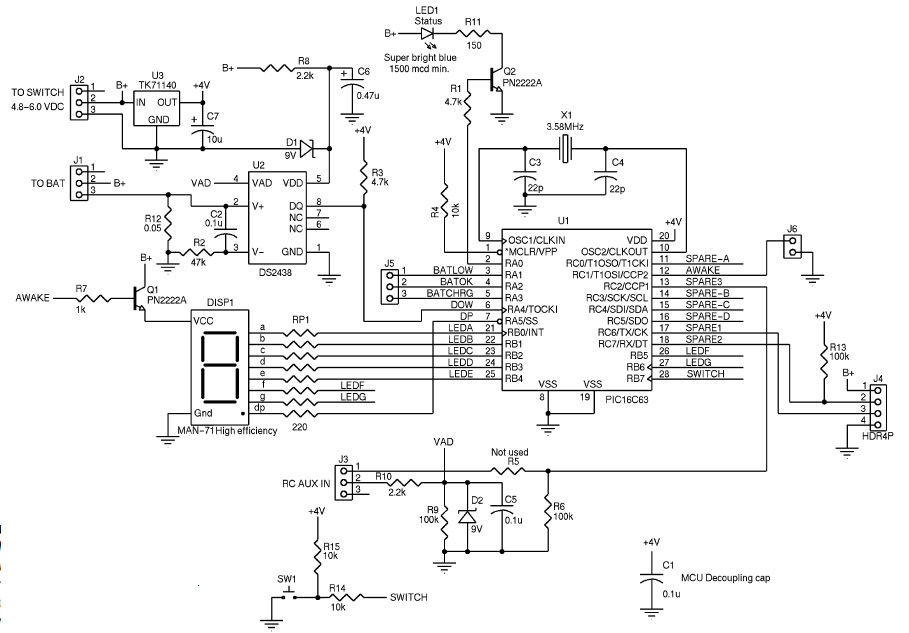 Figure 2: A battery fuel gauging IC and a microcontroller are combined to accurately measure the current consumption of an RC system. The singlecharacter LCD is used to display battery data and status messages.

This eight-pin coulomb counting chip contains an A/D-based current accumulator, A/D voltage convertor, and a slew of other features that are needed to get the job done. The famous Dallas one-wire I/O method provides an efficient interface to a PIC16C63 microcontroller…In the BatMon, the one-wire bus begins at pin 6 (port RA4) of the PIC16C63 microcontroller and terminates at the DS2438’s DQ I/O line (pin 8). Using bit-banging I/O, the PIC can read and write the necessary registers. The timing is critical, but the PIC is capable of handling the chore…The BatMon is not a good candidate for perfboard construction. A big issue is that RC models present a harsh operating environment. Vibration and less than pleasant landings demand that you use rugged electronic assembly techniques. My vote is that you design a circuit board for it. It is not a complicated circuit, so with the help of a freeware PCB program you should be on your way…The connections to the battery pack and receiver are made with standard RC hobby servo connectors. They are available at most RC hobby shops. You will need a 22-AWG, two-conductor female cable for the battery (J1), a 22-AWG, two-conductor male for the RC switch (J2), and a three-conductor (any AWG) for the Aux In (J3) connector…The finished unit is mounted in the model’s cockpit using double-sided tape or held with rubber bands (see Photo 2). 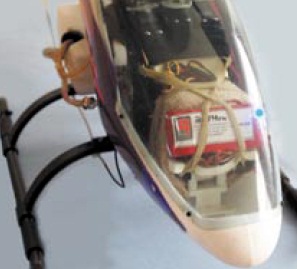 Photo 2: Here’s how the battery monitor looks installed in the RC model helicopter’s cockpit. You can use the BatMon on RC airplanes, cars, and boats too. Or, you could adapt the design for battery monitoring applications that aren’t RC-related.

Thomas Black designs and supports high-tech devices for the consumer and industrial markets. He is currently involved in telecom test products. During his free time, he can be found flying his RC models. Sometimes he attempts to improve his models by creating odd electronic designs, most of which are greeted by puzzled amusement from his flying pals.

The complete article is now available.