Cornell University students Sean Hubber and Crystal Lu built an Arduino-based electrocardiography (ECG) system that enables them to view a heart’s waveform on a mini TV. The basic idea is straightforward: an Arduino Due converts a heartbeat waveform to an NTSC signal. 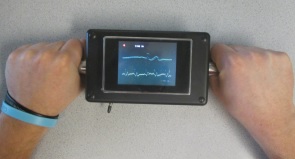 Here you can see the system in action. The top line (green) has a 1-s time base. The bottom line (yellow) has a 5-s
time base. (Source: Hubber & Lu)

In their article, “Hands-On Electrocardiography,” Hubber and Lu write:

We used the Arduino Due to convert the heartbeat waveform to an NTSC signal that could be used by a mini-TV. The Arduino Due continuously sampled the input provided by the voltage limiter at 240 sps. Similar to MATLAB, the vectorized signal was shifted left to make room at the end for the most recent sample. This provided a continuous real-time display of the incoming signal. Each frame outputted to the mini-TV contains two waveforms. One has a 1-s screen width and the other has a 5-s screen width. This enables the user to see a standard version (5 s) and a more zoomed in version (1 s). Each frame also contains an integer representing the program’s elapsed time. This code was produced by Cornell University professor Bruce Land.

As you can see in the nearby block diagram, Hubber and Lu’s ECG system comprises a circuit, an Arduino board, a TV display, MATLAB programming language, and a voltage limiter.

The system’s main circuit is “separated into several stages to ensure that retrieving the signal would be user-safe and that sufficient amplification could be made to produce a readable ECG signal,” Hubber and Lu noted.

The first stage is the conditioning stage, which ensures user safety through DC isolation by initially connecting the dry electrode signals directly to capacitors and resistors. The capacitors help with DC isolation and provide a DC offset correction while the resistors limit the current passing through. This input-conditioning stage is followed by amplification and filtering that yields an output with a high signal-to-noise ratio (SNR). After the circuit block, the signal is used by MATLAB and voltage limiter blocks. Directly after DC isolation, the signal is sent into a Texas Instruments INA116 differential amplifier and, with a 1-kΩ RG value, an initial gain of 51 is obtained. The INA116 has a low bias current, which permits the high-impedance signal source. The differential amplifier also utilizes a feedback loop, which prevents it from saturating.