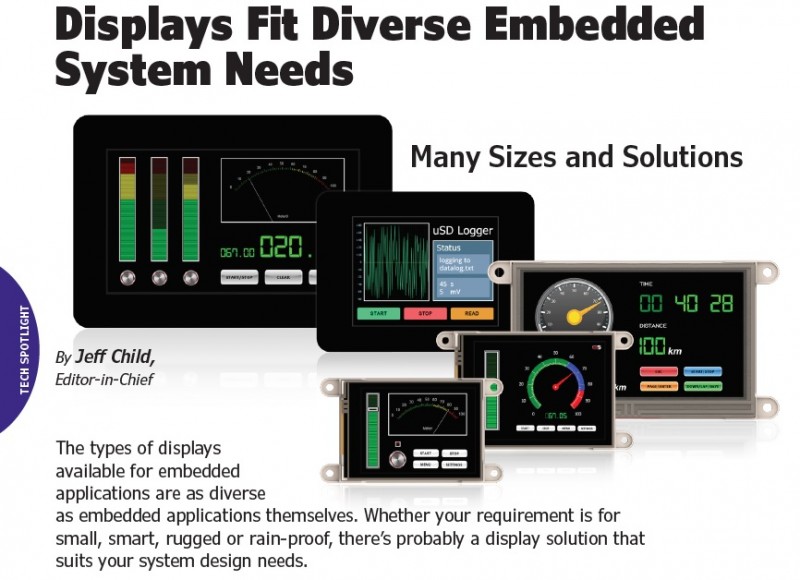 Many Sizes and Solutions


Long gone are the days when the Graphics Processor Unit (GPU) market was filled with many semiconductor vendors jockeying for position. A combination of chip integration: graphics function moving inside microprocessors—and business consolidation: graphics chip vendors getting acquired, has narrowed the technology space down to mostly Intel, AMD and NVIDIA. And while these vendors tailor their products for high-volume markets, embedded applications must adapt those same GPUs to their needs.

With that in mind, makers of displays for embedded applications are constantly evolving their products to keep pace with the latest GPU technologies and both new and legacy display interface standards. Technologies range from small e-paper displays to rugged sunlight readable displays for the outdoors to complete Panel PC solutions that embed PC functionality as part of the display.

Although this article is focused on displays in embedded systems, it’s helpful to first understand the larger markets that are driving GPU technology. For its part, Jon Peddie Research (JPR), a market research and consulting firm focused on graphics and multimedia saw mobile devices as the dominate market when they did their annual review of GPU developments for 2017. In spite of the slow decline of the PC market overall, PC-based GPU sales (which include workstations) have been increasing, according to the review. In the mobile market, integrated GPUs have risen at the same rate as mobile devices and the SoCs in them. The same is true for the console market where integrated graphics are in every console and they too have increased in sales over the year.

The market for, and use of, GPUs stretches from supercomputers and medical devices to gaming machines, mobile devices, automobiles and wearables. Just about everyone in the industrialized world has at least a half-dozen products with a GPU, and technophiles can easily count a dozen or more. The manufacturing of GPUs approaches science fiction with features that will move below 10 nm next year and have a glide-path to 3 nm—and some think even 1 nm.

Throughout 2017 JPR saw a few new, and some clever adaptations of GPUs that show the path for future developments and subsequent applications. 2017 was an amazing year for GPU development driven by games, eSports, AI, crypto currency mining and simulations. Autonomous vehicles started to become a reality, as did augmented reality. The over-hyped, consumer-based PC VR market explosion didn’t happen—and had little to no impact on GPU developments or sales. Most of the participants in VR already had a high-end system and the head-mounted display (HMD) was just another display to them.

Mobile GPUs, exemplified by products from Qualcomm, ARM and Imagination Technologies, are key to amazing devices with long battery life and screens at or approaching 4K. And in 2017 people started talking about and showing High dynamic range (HDR). JPR’s review says that many, if not all, the developments we will see in 2018 were started as early as 2015, and that three to four-year lead time will continue.

Lead times could get longer as semiconductor engineers learn how to deal with chips constructed with billions of transistors manufactured at feature sizes smaller than X-rays. Ironically, buying cycles are also accelerating ensuring strong competition as players try to leap-frog each other in innovation. According to JPR, we’ll see considerable innovation in 2018, with AI being the leading application that will permeate every sector of our lives. The JPR GPU Developments in 2017 Report is free to all subscribers of JPR. Individual copies of the report can be purchased for $100.

Photo 1.
The Internet of Displays is a range of miniature displays that offer small color displays with integrated Wi-Fi and a microSD/HDC slot.

Focusing on the small side of the display spectrum, in November 4D Systems announced the latest addition to its Internet-of-Display module family with its smallest LCD display yet. At 0.9-inch and powered by the Wi-Fi enabled ESP8266, it is well suited for miniature IoT projects. The Internet of Displays is the company’s range of miniature feature rich displays that offer small color displays with integrated Wi-Fi and a microSD/HDC slot (Photo 1). …