Kevin Marinelli, IT manager for the Mathematics Department at the University of Connecticut, recently answered CC.Post’s newsletter invitation to readers to tell us about their wearable electronics projects. Kevin exhibited his project,  “Wireless Data Gloves,” at the World Maker Faire New York in September. He spoke with Circuit Cellar Managing Editor Mary Wilson about the gloves, which are based on an Adafruit ATmega32U4 breakout board, use XBee modules for wireless communication, and enable wearers to visually manipulate data and 3-D graphics.

MARY: Tell us a little bit about yourself and your educational and professional background.

KEVIN: I am originally from Sydney, Nova Scotia, in Canada. From an early age I have 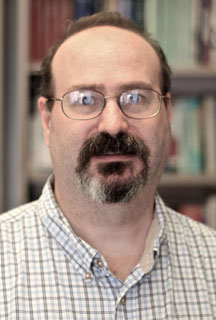 My first full-time employment was with ITS (the computer center) at Dalhousie University. After eight years, I moved on to an IT management position the Ocean Mapping Group at the University of New Brunswick. I am currently the IT manager for the Mathematics Department at  UConn.

I am also an active member of MakeHartford, which is a local group of makers in Hartford, Connecticut.

MARY: Describe the wireless data gloves you recently exhibited at the World Maker Faire in New York. What inspired the idea?

KEVIN: The idea was initially inspired 20 years ago when using a Polhemus 6 Degree-of-Freedom sensor for manipulating computer graphics when I was at the University of New Brunswick. The device used magnetic fields to locate a sensor in three-dimensional space and detect its orientation. The combined location and orientation data provides data with six degrees of freedom. I have been interested in creating six degrees of freedom input devices ever since. With the Arduino and current sensor technologies, that is now possible. 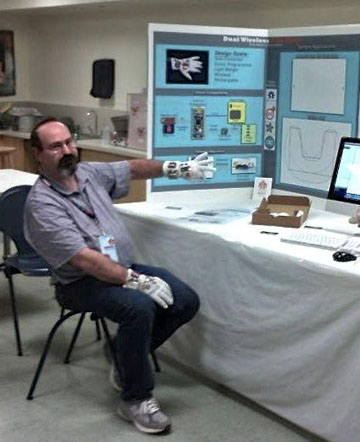 MARY: What do the gloves do? What applications are there? Can you provide an example of who might use them and for what purpose?

KEVIN: The data gloves allow me to use my hands to wirelessly transmit telemetry data to a base station computer, which collects the data and provides it to any application programs that need it.

MARY: Can you tell me about the data gloves’s design and the components used?

KEVIN: The basic design guidelines were to make the gloves self-contained, lightweight, easy to program, wireless, and rechargeable. The main electronic components are an Adafruit ATmega32U4 breakout board  (Arduino Leonardo software compatible), a SparkFun 9d0f sensor board, an XBee Pro packet radio, a LiPo battery charger circuit, and a LiPo battery. These are all open hardware projects or, in the case of the battery, are ordinary consumer products.

The choice of the ATMega32U4 for the processor was made to provide a USB port without any external components such as an FTDI chip to convert between serial and USB communications. This frees up the serial port on the processor for communicating with the XBee radio.

For the sensors, the SparkFun 9dof board was perfect because of its miniscule size and 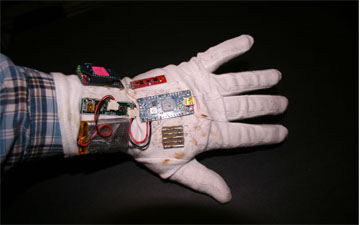 because it only requires four connections: two connections for power and two connections for I2C. The board has components with readily available data sheets, and there is access to working example code for the sensor board. This reduced the design work greatly by using an off-the-shelf product instead of designing one myself.

The choice of an 800-mAh LiPo battery provides an excellent lightweight rechargeable power supply in a small form factor. The relatively small battery powers the project for more than 24 h of continuous use. 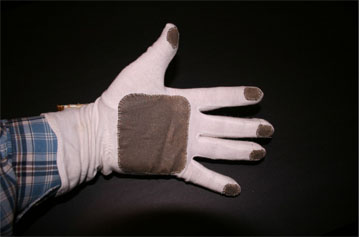 A simple white cotton glove acts as the structure to mount the electronics. For user-controlled input, the glove has conductive fabric fingertips and palm. Touching a finger to the thumb, or the pad on the palm, closes an electrical pathway, which allows the microcontroller to detect the input.

MARY: Are the gloves finished? What were some of the design challenges? Do you plan any changes to the design?

KEVIN: The initial glove design and second version of the prototype have been completed. 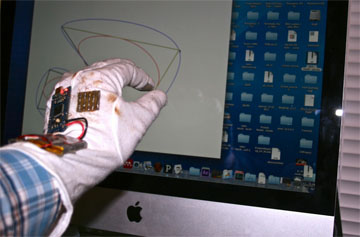 The major design challenges were finding a microcontroller board with sufficient capabilities to fit on the back of a hand, and configuring the XBee radios. The data glove design will continue to evolve over the next year as newer and more compact components become available.

Initially I was designing and building my own microcontroller circuit based on the ATmega32U4, but Adafruit came out with a nice, usable, designed board for my needs. So I changed the design to use their board.

SparkFun has a well-designed micro USB-based LiPo battery charger circuit. This would have been ideal for my project except that it does not have an On/Off switch and only has some through-hole solder points for powering an external project. I used their CadSoft EAGLE files to redesign the circuit to make it slightly more compact, added in a power switch and a JST connector for the power output for projects.

The XBee radios were an interesting challenge on their own. My initial design used the standard XBee, but that caused communication complications when using multiple data gloves simultaneously. In reading Robert Faludi’s book Building Wireless Sensor Networks: With ZigBee, XBee, Arduino, and Processing, I learned that the XBee Pro was more suited to my needs because it could be configured on a private area network (PAN) with end-nodes for the data gloves and a coordinator for the base station.

One planned future change is to switch to the surface-mount version of the XBee Pro. This will reduce both the size and weight of the electronics for the project.

The current significant design challenge I am working on is how to prevent metal fatigue in the phosphor bronze wires as they bend when the hand and fingers flex. The fatigue problem occurs because I use a small diamond file to remove the Kapton insulation on the wires. This process introduces small nicks or makes the wires too thin, which then promotes the metal fatigue.

A third version is in the design stage. The new design will replace the SparkFun 9dof board with a smaller single-chip sensor, which I hope can be mounted directly on the Adafruit ATmega32U4 board.

MARY: What new skills or technologies did you learn from the project, if any?

Learning to program Arduino boards and Arduino clones has been incredible. The fact that the boards can be programmed using C in a nice IDE with lots of support libraries for common programming tasks makes the platform an incredibly efficient tool. Having an enormous following makes it very easy to find technical support for solving problems with Arduino products and making Arduino clones.

Wireless networking is a key component for the success of the project. I was lucky to have a course in wireless sensor network design at UConn, which taught me how to leverage wireless technology and avoid many of the pitfalls. That, combined with some excellent reference books I found, insured that the networking is stable. The network design provides for more network bandwidth than a single pair of data gloves require, so it is feasible to have multiple people collaborating manipulating the same on the same project.

Designing microcontroller circuits using EAGLE has been an interesting experience. While most of the new components I use regularly in designs are available in libraries from Adafruit and SparkFun, I occasionally have to design my own parts in EAGLE. Using EAGLE to its fullest potential will still take some time, but I have become reasonably proficient with it.

For soldering, I mostly still use a standard temperature controlled soldering iron with a standard tip. Amazingly, this allows me to solder 0402 resistors and capacitors and up to 100 pitch chips. When I have components that need to be soldered under the surface, I use solder paste and a modified electric skillet. This allows me to directly control the temperature of the soldering and gives me direct access to monitoring the process.

The battery charger circuit on my data glove is hand soldered and has a number of 0402-sized components, as  well as a micro USB connector, which also is a challenge to hand solder properly.

MARY: Are there similar “data gloves” out there? How are yours different?

There are a number of data glove projects, which can be found on the Internet. Some are commercial products, while others are academic projects.

My gloves are unique in that they are lightweight and self-contained on the cotton glove. All other projects that you can find on the Internet are either hard-wired to a computer or have components such as the microcontroller, batteries, or radio strapped to the arm or body.

Also, because the main structure is a self-contained cotton glove; the gloves do not interfere with other activities such as typing on a keyboard, using a mouse, writing with a pen, or even drinking from a glass. This was quite handy when developing the software for the glove because I could test the software and make programming corrections without having the inconvenience of putting the gloves on and taking them off repeatedly.

MARY: Are you working on any other projects you’d like to briefly tell us about?

KEVIN: At UConn, we are lucky to have one of the few academic programs in puppetry in the US. In the spring, I plan on taking a fine arts course at UConn in designing and making marionette puppets. This will allow me to expand the use of my data gloves into controlling and manipulating puppets for performance art.

I am collaborating on designing circuit boards with a number of people in Hartford. The more interesting collaborations are with artists, where they think differently about technology than I do. Balam Soto of Open Wire Labs is a new media artist and one of the creative artists I collaborate with regularly. He is also a member of MakeHartford and presents at Maker Faires.

MARY: What was the response to the wireless data gloves at World Maker Faire New York?

KEVIN: The response to the data gloves was overwhelmingly positive. People were making comparisons to the Nintendo Power Glove and to the movie “Minority Report.” Several musicians commented that the gloves should be excellent for performing and recording virtual musical instruments such as a guitar, trumpet and drums.

For the demonstration, I showed a custom application; which allowed both hands (or two people) to interactively manipulate points and lines on a drawing. Many people were encouraged to use the gloves for themselves, which enhanced the quality of the feedback I received.

The gloves are large-sized to fit my hands, which was quite a challenge for younger children to use because their hands were “lost” in the gloves. Even with the size challenge, it was fun watching younger children manipulating the objects on the computer screen.

I look forward to the Maker Faire next year, when I will have implemented the newer design for the data gloves and will have additional software to demonstrate. I plan on trying to put together a presentation on some form of performance art using the data gloves.