As head of the Computer Science and Software  Engineering department at Penn State Erie, The Behrend College, Chris Coulston is busy.

But not too busy to surf the ‘Net for design inspiration. 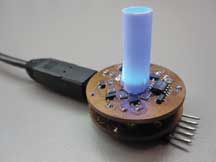 And one of his latest projects may earn him the title of “social jewelry designer,” along with college professor and department chair.

In the June issue of Circuit Cellar, Coulston writes about his design and construction of an RGB LED pendant that “cycles through a color sequence, detects when another pendant is brought into its proximity, and communicates color sequence information to the other pendant through its LED.” The heart of the design is a Seoul Semiconductor SFT722 RGB LED.

Coulston was online a few years ago when he ran across the first half of his project inspiration—a Mitsubishi Electric Research Laboratories technical report titled “Very Low-Cost Sensing and Communication Using Bi-directional LEDs.” The report, Coulston says, “describes how an ordinary LED with no additional circuitry can act as a full-duplex communication channel.” 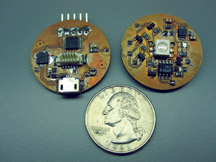 His remaining inspiration came from an article he recalled appearing in Circuit Cellar a decade ago.

The Mitsubishi labs technical report “got me thinking about Jeff Bachiochi’s article ‘Designing with RGB LEDs’ (Circuit Cellar 159, 2003), in which the challenges associated with designing a piece of LED jewelry are described,” Coulston says. “The fusion of these two ideas was the inspiration for my social jewelry design.”

“The prototype pendant is mainly controlled through a USB-to-USART bridge,” Couston says. “Its power is supplied by the same connection.”

He invites anyone who is  “curious how an LED can be used as a transceiver and how it’s used to build a piece of social jewelry” to read his article. You’ll find it in next month’s issue of Circuit Cellar. 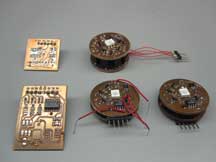