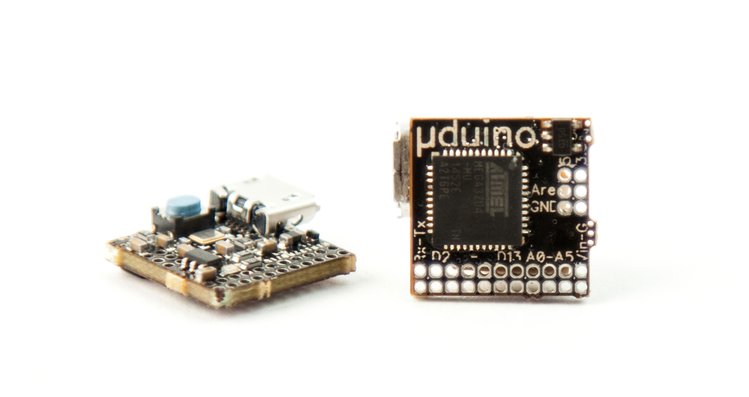 Crowd funded via Crowd Supply, a project called µduino is an Arduino measuring in at 12mm (0.5 inches) x 12mm. While similarly sized micro-controller boards do exist, their power is severely limited to using chips such as the Attiny85 (with up to 6 I/O ports). The µduino makes use of the power of the ATMEGA32U4 chip found in the Arduino Leonardo (a board over 20 times larger), offering 20 I/O ports, including PWM and ADC ports. In addition, the µduino can be powered by batteries or directly by micro-USB. The µduino can also operate in one of two power modes, 3.3V or 5V, which can be selected using a jumper on the board. This way, users can tailor µduino to match their sensors and power supplies. 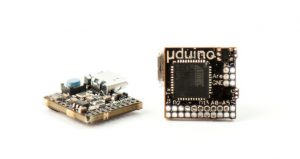 The prototype measures 14mm (0.55 inches) square, and the final design measures just 12mm (0.47 inches) square. Unlike many other Arduino-based boards, the µduino uses smaller hole separation (1.27mm vs 2.54mm). While vastly cutting down on size, standard sized wires are still compatible and can be soldered fairly easily.