A reader recently noted our excessive use of the term “rugged,” which is fair enough. In our defense, embedded gear is increasingly tolerant of wide temperature ranges, and to a lesser extent, excessive shock, vibration, and dust and water ingress. From now on, we will no longer use “rugged” to describe a system that has a wide temperature range without also offering other protections. We will, however, continue to apply it to systems like DFI’s i.MX6-based EC900-FS6 mini-PC, which is not only rugged, but quite compact at 143 mm x 96.4 mmx 34 mm. 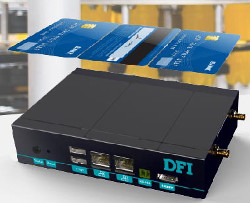 The EC900-FS6 is built around DFI’s Pico-ITX form-factor FS053 SBC, which is equipped with a dual Cortex-A9 i.MX6 DualLite SoC clocked to 1GHz. Both the SBC and the system ship with Android 5.1 beta, as well as a stack built with Yocto Project 1.8 beta, both with Linux Kernel 3.14.52.

EC900-FS6 detail view
(click image to enlarge)
The EC900-FS6 is further equipped with an HD-resolution HDMI port, 4-bit DIO, a UART console, and RS-485 and RS-232 interfaces deployed via 2-pole terminal blocks. A mini-PCIe slot is accompanied by dual mounting holes for WiFi antennas. Other features include a watchdog timer, a reset button, and a status LED.

The EC900-FS6 appears to be available now at an undisclosed price. More information may be found in this EC900-FS6 announcement and datasheet (PDF).

This article originally appeared on LinuxGizmos.com on August 29.