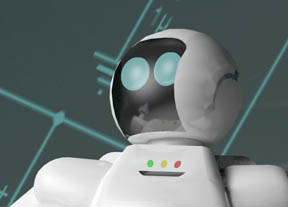 Are you curious about how an evolving neural network helps a robot learn about itself and its environment?

A neural network with two inputs, one output, and three hidden neurons.

In the September issue of Circuit Cellar, Walter O. Krawec begins a two-part series that describes an ENN he uses in robot development experiments, explains how short-term memory (STM) evaluates a network’s conditions and how to add data to STM, and discusses how an ENN uses a robot’s minimalistic “instincts” and “reflexes” to guide a robot’s evolution.

Krawec, who has been building robots since 1999, is a research assistant and PhD student in Computer Science at the Stevens Institute of Technology in Hoboken, N.J. The work presented in his two-part series is based on a paper published in the proceedings of the 13th International Artificial Life Conference in 2012.

The overall goal of the Krawec’s experiments in developmental robotics is to enable a robot to learn on its own without human intervention. “An ENN is used to accomplish this,” he says.  “This network will be capable of growing and learning in real time as the robot operates.”

In his series, Krawec presents an architecture he says “enables a robot to ‘grow’ from a naive individual with no knowledge of itself (i.e., no notion of what its sensors are reporting or what its outputs actually do) to one that can operate in an environment.”

“This architecture will consist of an evolving neural network (ENN), a short-term memory (STM), and simple instincts and reflexes.

“Despite a minimal set of instincts, which provide penalties and rewards for certain actions (e.g., crashing into a wall, the robots described in this article sometimes develop complicated and unexpected behaviors. Such behaviors range from following walls (despite the robots’ binary proximity sensors) to games of ‘follow the leader.’…

“This article explores basic artificial neural network (ANN) concepts and outlines the ENN I’m using in this project. This is a neural network that, over time, learns not only by adjusting synaptic weights but also by growing new neurons and new connections (generally resulting in a recurrent neural network). Finally, I’ll discuss the STM system and how it is used to evaluate a network’s fitness.”

“In Part 2, I’ll examine the reflex and instinct system, which feeds reward information to an ENN and the ‘decision path’ system, which rewards or penalizes chains of actions,” Krawec says. “Finally, I’ll discuss experiments conducted to demonstrate this architecture in a simulated environment. In particular, I’ll describe some interesting behaviors that robots have developed in trial runs.”

For more, check out Krawec’s articles on “Experiments in Developmental Robotics” in the September and October issues. You will also find information and videos about his work with robots on his website.