Canadian Nelson Epp has earned degrees in physics and electrical engineering. But as a child, he was stumped by the Rubik’s Cube puzzle. So, as an adult, he built a Rubik’s Cube-solving robot that uses a Parallax Propeller microcontroller and a 52-move algorithm to solve the 3-D puzzle.

Designing and completing the robot wasn’t easy. Epp says he originally used a “gripper”-type robot that was “a complete disaster.” Then he experimented with different algorithms–“human memorizable ones”—before settling on a solution method developed by mathematician Morwen Thistlethwaite. (The algorithm is based on the mathematical concepts of a group, a subgroup, and generator and coset representatives.)

Nelson also developed a version of his Rubik’s Cube solver that used neural networks to analyze the cube’s colors, but that worked only half the time.

So, considering the time he had to spend on project trial and error (and his obligations to work, family, and pets), it took about six years to complete the robot. He writes about the results in the September issue of Circuit Cellar magazine.

Here, he describes some of the choices he made in hardware components. 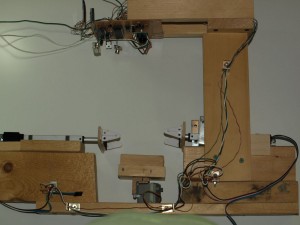 serial EEPROM, remote reset circuitry, the Propeller, a SD/MMC card, the camera board’s digital output circuitry, and an ECS ECS-300C-160 oscillator. The images at right show my cube solver and circuit board.
“The ECS-300C-160 is a self-contained dual-output oscillator 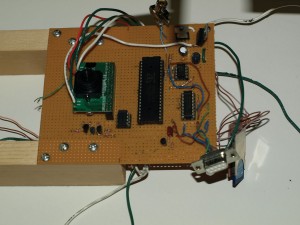 that can produce clock signals that are binary fractions of the 16-MHz base signal. My application uses the 8- and 16-MHz clock taps. The Propeller is clocked with the 8-MHz signal and then internally multiplied up to 64 MHz. The 16-MHz signal is fed to the camera.

“I used a MAX3232 transceiver to communicate to the host’s RS-232 port. The Propeller’s serial input pin and serial output pin are only required at startup. After the Propeller starts up, these pins can be used to exchange commands with the host. The Propeller also has pins for serial communication to an EEPROM, which are used during power up when a host is not sending a program.

“The cube-solving algorithm uses the coset representative file stored on an SD card, which is read by the Propeller via a SparkFun Electronics Breakout Board for SD-MMC cards. The Propeller interface to the SD card consists of a chip select, data in, data out, data clock, and power. The chip select is fixed into the active state. The three lines associated with data are wired to the Propeller.

“The Propeller uses a camera to determine the cube’s starting permutation. The C3088 uses an Electronics123 OV6630 color sensor module. I chose the camera because its data format and clocking speed was within the range of the Propeller’s capabilities. The C3088 has jumpers for external or internal clocking.”

To read more about Epp’s design journey—and outcomes—check out Circuit Cellar’s September issue. And click here for a video of his robot at work.