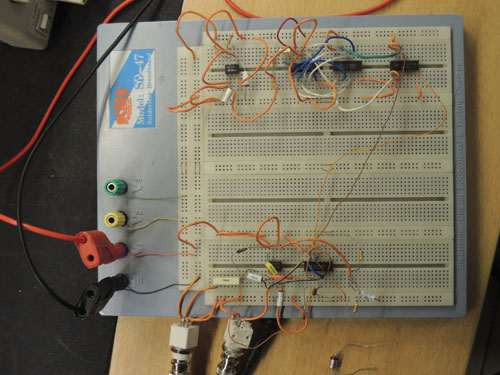 Here is Lacoste’s experimental mockup. It’s not pretty, but it’s functional. The clock is at the top. The filter is below.

Circuit Cellar columnist Robert Lacoste doesn’t like to throw away his old magazines—at least the ones that have electronics projects.

And often it’s the lack of microcontrollers in such projects that he finds intriguing. The designs required “clever solutions to implement even simple features, which is always a good source of inspiration,” he says.

Lacoste was recently inspired by a 1981 article on switched-capacitor filters (part of the old magazine collection in his basement). So, he decided to revisit the topic in his column appearing in Circuit Cellar’s August issue.

“I figured, why not refresh it for a Circuit Cellar Darker Side article, as mastering switched-capacitor filters is now mandatory for plenty of mixed-signal designs?”

Lacoste’s column shows you how to modify a basic low-pass filter into a switched-capacitor filter.

He explains why such a modification can be a good one:

“The most basic form of a low-pass filter is the simple one-pole RC filter… Why can’t we be happy with such simple RC filters? There are two reasons. First, it is often convenient to have a filter with an adjustable cutoff frequency. With a RC filter, you would need to change either the resistor’s or the capacitor’s value. This it is not easy to do if you want to design an inexpensive electronic system. The other reason is more linked to IC technology and CMOS in particular.

“Assume you want to design a filtering chip with a cutoff frequency of about 10 kHz. If you want to use a small and inexpensive capacitor—perhaps no more than 1 nF—you will need a high-value resistor… The problem is that designing a high-value resistor on a silicon chip is complicated (i.e., expensive). Moreover, unlike capacitors, on-chip resistors are difficult to manufacture with tight specifications.”

Lacoste found the solution by looking through few back issues of his magazine collection and a few past decades.

“In the late 1970s, IC designers looked for a way to replace high-value resistors with inexpensive and easy-to-integrate parts (e.g., small capacitor),” he says.

The idea of replacing a resistor with a switched capacitor produced the switched-capacitor architecture Lacoste presents in his August column. As a bonus, his design offers an easy way to adjust switching frequencies.

“Of course, no one is actually designing a switched-capacitor circuit from scratch, as I did for this article,” Lacoste says. “It was only for demonstration purposes. There are plenty of ready-made switched-capacitor chips on the market. Just read their datasheets and use them in your design, more or less as a black box.”

Still, Lacoste says, “the best way to learn is to never be afraid of any technology. Knowing the internals helps you avoid usage mistakes.”

Intrigued? Check out Lacoste’s column in the August issue for more details.