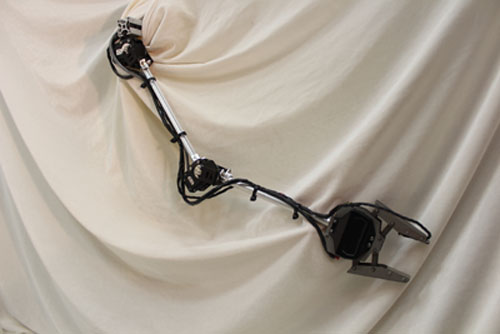 In its July issue, Circuit Cellar presents a project that combines the technology behind Microsoft’s Kinect gaming device with a prototype prosthetic arm.

“We designed an inexpensive, adaptable platform for prototype prosthetics and their testing systems,” the team says. “These systems use Microsoft’s Kinect for Xbox, a motion sensing device, to track a healthy human arm’s instantaneous movement, replicate the exact movement, and test a prosthetic prototype’s response.”

“Kelvin James was one of the first to embed a microprocessor in a prosthetic limb in the mid-1980s…,” they add. “With the maker movement and advances in embedded electronics, mechanical T-slot systems, and consumer-grade sensor systems, these applications now have more intuitive designs. Integrating Xbox provides a platform to test prosthetic devices’ control algorithms. Xbox also enables prosthetic arm end users to naturally train their arms.”

They elaborate on their choices in building the four main hardware components of their design, which include actuators, electronics, sensors, and mechanical support:

“Robotis Dynamixel motors combine power-dense neodymium motors from Maxon Motors with local angle sensing and high gear ratio transmission, all in a compact case. Atmel’s on-board 8-bit ATmega8 microcontroller, which is similar to the standard Arduino, has high (17-to-50-ms) latency. Instead, we used a 16-bit Freescale Semiconductor MC9S12 microcontroller on an Arduino-form-factor board. It was bulkier, but it was ideal for prototyping. The Xbox system provided high-level sensing. Finally, we used Twintec’s MicroRAX 10-mm profile T-slot aluminum to speed the mechanical prototyping.”

The team’s goal was to design a  prosthetic arm that is markedly different from others currently available. “We began by building a working prototype of a smooth-moving prosthetic arm,” they say in their article.

“We developed four quadrant-capable H-bridge-driven motors and proportional-derivative (PD) controllers at the prosthetic’s joints to run on a MC9S12 microcontroller. Monitoring the prosthetic’s angular position provided us with an analytic comparison of the programmed and outputted results.” 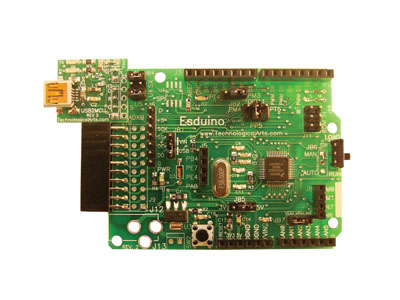 A Technological Arts Esduino microcontroller board is at the heart of the prosthetic arm design.

The team concludes that its project illustrates how to combine off-the-shelf Arduino-compatible parts, aluminum T-slots, servomotors, and a Kinect into an adaptable prosthetic arm.

But more broadly, they say, it’s a project that supports the argument that  “more natural ways of training and tuning prostheses” can be achieved because the Kinect “enables potential end users to manipulate their prostheses without requiring complicated scripting or programming methods.”

For more on this interesting idea, check out the July issue of Circuit Cellar. And for a video from an earlier Circuit Cellar post about this project, click here.