What does the future hold for small-RAM microcontrollers? Will there be any reason to put up with the constraints of parts that have little RAM, no floating point, and 8-bit registers? The answer matters to engineers who have spent years programming small-RAM MCUs. It also matters to designers who are hoping to keep their skills relevant as their careers progress in the 21st century. 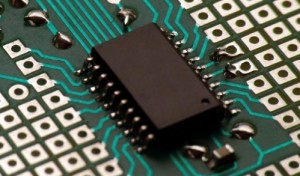 In the upcoming Circuit Cellar 25th Anniversary Issue—which is slated for publication in early 2013—University of Utah professor John Regehr shares his thoughts on the future of small-RAM devices. He writes:

For the last several decades, the role of small-RAM microcontrollers has been clear: they are used to perform fixed (though sometimes very sophisticated) functionality in environments where cost, power consumption, and size need to be minimized. They exploit the low marginal cost of additional transistors to integrate volatile RAM, nonvolatile RAM, and numerous peripherals into the same package as the processor core, providing a huge amount of functionality in a small, cheap package. Something that is less clear is the future of small-RAM microcontrollers. The same fabrication economics that make it possible to put numerous peripherals on a single die also permit RAM to be added at little cost. This was brought home to me recently when I started using Raspberry Pi boards in my embedded software class at the University of Utah. These cost $25 to $35 and run a full-sized Linux distribution including GCC, X Windows, Python, and everything else—all on a system-on-chip with 256 MB of RAM that probably costs a few dollars in quantity.

We might ask: Given that it is already the case that a Raspberry Pi costs about the same as an Arduino board, in the future will there be any reason to put up with the constraints of an architecture like Atmel’s AVR, where we have little RAM, no floating point, and 8-bit registers? The answer matters to those of us who enjoy programming small-RAM MCUs and who have spent years fine-tuning our skills to do so. It also matters to those of us who hope to keep our skills relevant through the middle of the 21st century. Can we keep writing C code, or do we need to start learning Java, Python, and Haskell? Can we keep writing stand-alone “while (true)” loops, or will every little MCU support a pile of virtual machines, each with its own OS?

In the short term, it is clear that inertia will keep the small-RAM parts around, though increasingly they will be of the more compiler-friendly varieties, such as AVR and MSP430, as opposed to earlier instruction sets like Z80, HC11, and their descendants. But will small-RAM microcontrollers exist in the longer term (e.g., 25 or 50 years)? I’ll attempt to tackle this question by separately discussing the two things that make small-RAM parts attractive today: their low cost and their simplicity.

If we assume a cost model where packaging and soldering costs are fixed but the marginal cost of a transistor (not only in terms of fabrication, but also in terms of power consumption) continues to drop, then small-RAM parts will eventually disappear. In this case, several decades from now even the lowliest eight-pin package, costing a few pennies, will contain a massive amount of RAM and will be capable of running a code base containing billions of lines…

Do Small-RAM Devices Have a Future? (CC 25th Anniversary Preview)…