Field-programmable gate arrays (FPGAs) have been around for more than two decades. What does the future hold for this technology? According to Halifax, Canada-based electrical engineering consultant Colin O’Flynn, current FPGA-related research and recent innovations seem to presage a coming revolution in digital system design, and this could lead to striking fast advances in several fields of engineering.

In the upcoming Circuit Cellar 25th Anniversary Issue—which is slated for publication in early 2013—O’Flynn shares his thoughts on the future of FPGA technology. He writes:

Field-programmable gate arrays (FPGAs) provide a powerful means to design digital systems (see Photo 1). Rather than writing a software program, you can design a number of hardware blocks to perform your tasks at blazing speeds… 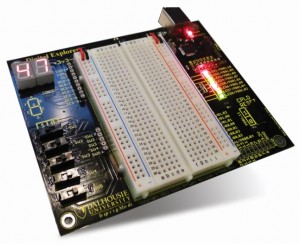 Microcontrollers have long played the peripheral game: the integration of easy-to-use dedicated peripherals onto the same physical chip as your digital core. FPGAs, it would seem, have no use for dedicated logic, since you can just design everything exactly as you desire. But dedicated logic has its advantages.

Beyond technical advantages, such as lower power consumption or smaller area with dedicated cores compared to programmable cores, dedicated cores can also reduce development effort. For example, current technology sees FPGAs with integrated high-end ARM cores, capable of running Linux on the integrated hard-core. Anyone familiar with setting up Linux on an ARM-based microprocessor can use this, without needing to learn about how one develops cores and peripherals on the FPGA itself.
Beyond integrating digital cores to simplify development, you can expect to see the integration of analog peripherals. Looking at the microcontroller market, you can find a variety of tightly integrated SoC devices with analog and digital on a single device. For instance, a variety of radio devices contain a complete RF front-end combined with a digital microcontroller. While current FPGA devices offer very limited analog peripherals (most have none), having a FPGA with an integrated high-speed ADC or DAC would be the making of a highly flexible radio-on-a-chip platform. The high development cost and lack of a current market has meant this remains only an interesting idea. To see where this market comes from, let’s look at some applications for such an FPGA.

Software-Defined Radio
Software-defined radio (SDR) takes a curious approach to receiving radio waves: digitize it all, and let software sort it out. The radio front-end is simple. Typically, the center frequency of interest is just downshifted to the baseband, everything else is filtered out, and a high-speed ADC digitizes it. All the demodulation and decoding then can be down in software. Naturally, this can require some fast sampling speeds. Anything from 20 to 500 MSps is fairly typical for these systems. Dealing with this much data is suited to FPGAs, since one can generate blocks to perform all the different functions that operate simultaneously…