The best DIY electrical engineering projects are effective, simple, and inexpensive. Devlin Gualtieri’s design of a wireless water alarm, which he describes in Circuit Cellar’s February issue, meets all those requirements.

Like most homeowners, Gualtieri has discovered water leaks in his northern New Jersey home after the damage has already started.

“In all cases, an early warning about water on the floor would have prevented a lot of the resulting damage,” he says.

You can certainly buy water alarm systems that will alert you to everything from a leak in a well-water storage tank to moisture from a cracked boiler. But they typically work with proprietary and expensive home-alarm systems that also charge a monthly “monitoring” fee.

“As an advocate of free and open-source software, it’s not surprising that I object to such schemes,” Gualtieri says. 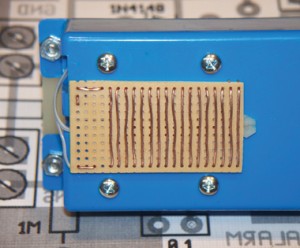 Photo 1: An interdigital water detection sensor is shown. Alternate rows are lengths of AWG 22 copper wire, which is either bare or has its insulation removed. The sensor is shown mounted to the bottom of the box containing the water alarm circuitry. I attached it with double-stick foam tape, but silicone adhesive should also work.

Because water conducts electricity, Gualtieri sensors are DIY interdigital electrodes that can lie flat on a surface to detect the first presence of water. And their design couldn’t be easier.

He also shares a number of design “tricks,” including one he used to make his low-battery alert work:

“A battery monitor is an important feature of any battery-powered alarm circuit. The Microchip Technology PIC12F675 microcontroller I used in my alarm circuit has 10-bit ADCs that can be optionally assigned to the I/O pins. However, the problem is that the reference voltage for this conversion comes from the battery itself. As the battery drains from 100% downward, so does the voltage reference, so no voltage change would be registered. 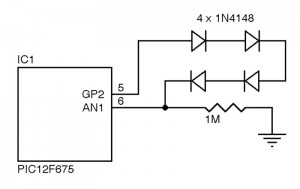 Figure 1: This is the portion of the water alarm circuit used for the battery monitor. The series diodes offer a 1.33-V total drop, which offers a reference voltage so the ADC can see changes in the battery voltage.

“I used a simple mathematical trick to enable battery monitoring. Figure 1 shows a portion of the schematic diagram. As you can see, the analog input pin connects to an output pin, which is at the battery voltage when it’s high through a series connection of four small signal diodes (1N4148). The 1-MΩ resistor in series with the diodes limits their current to a few microamps when the output pin is energized. At such low current, the voltage drop across each diode is about 0.35 V. An actual measurement showed the total voltage drop across the four diodes to be 1.33 V.

“Table 1 shows the digital values as a function of battery voltage. The nominal voltage of three alkaline cells is 4.75 V. The nominal voltage of three lithium cells is 5.4 V. The PIC12F675 functions from approximately 2 to 6.5 V, but the wireless transmitter needs as much voltage as possible to generate a reliable signal. I arbitrarily coded the battery alarm at 685, or a little above 4 V. That way, there’s still enough power to energize the wireless transmitter at a useful power level.”

“Photo 2 shows one of the transmitter modules I used in my system,” he says. “The round device is a surface acoustic wave (SAW) resonator. It just takes a few components to transform this into a low-power transmitter operable over a wide supply voltage range, up to 12 V. The companion receiver module is also shown. My alarm has a 916.5-MHz operating frequency, but 433 MHz is a more popular alarm frequency with many similar modules.”

Photo 2: These transmitter and receiver modules are used in the water alarm. The modules operate at 916.5 MHz, but 433 MHz is a more common alarm frequency with similar modules. The scale is inches.

For more details on this easy and affordable early-warning water alarm, check out the February issue. 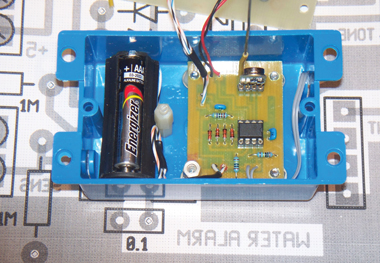 Photo 3: This is the water alarm’s interior. The transmitter module with its antenna can be seen in the upper right. The battery holder was harvested from a $1 LED flashlight. The box is 2.25“ × 3.5“, excluding the tabs. 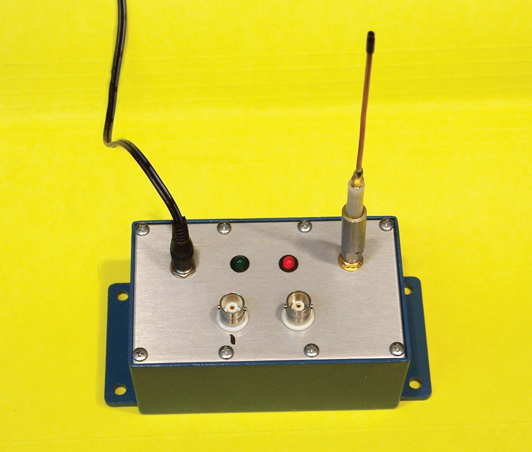 Photo 4: Here is my receiver circuit. One connector was used to monitor the signal strength voltage during development. The other connector feeds an input on a home alarm system. The short antenna reveals its 916.5-MHz operating frequency. Modules with a 433-MHz frequency will have a longer antenna.