My objectives for my recent robot design were fairly modest. I wanted to build a robot that could cruise on its own, avoid obstacles, escape from inadvertent collisions, and track a light source. I knew that if I could meet such objective other more complex behaviors would be possible (e.g., self-docking on low power). There certainly many commercial robots on the market that could have met my requirements. But I decided that my best bet would be to roll my own. I wanted to keep things simple, and I wanted to fully understand the sensors and controls for behavioral autonomous operation. The TOMBOT is the fruit of that labor (see Photo 1a). A colleague came up with the name TOMBOT in honor of its inventor, and the name kind of stuck. 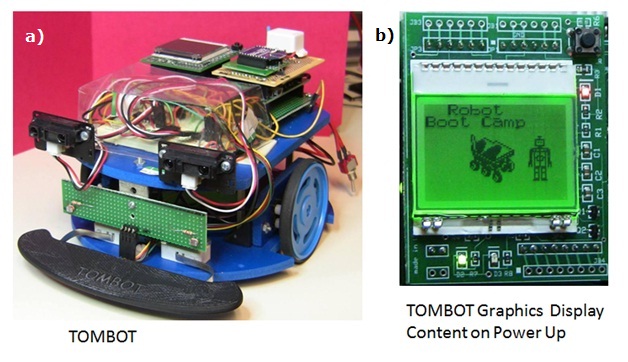 In this series of articles, I’ll present lessons learned and describe the hardware/software design process. The series will detail TOMBOT-style robot hardware and assembly, as well as behavior programming techniques using C code. By the end of the series, I’ll have covered a complete behavior programming library and API, which will be available for experimentation.

The TOMBOT robot is certainly minimal, no frills: two continuous-rotation, variable-speed control servos; two IR (850 nm) analog distance measurement sensors (4- to 30-cm range); two CdS photoconductive cells with good lux response in visible spectrum; and, finally, a front bumper (switch-activated) for collision detection. The platform is simple: servos and sensors on the left and right side of two level platforms. The bottom platform houses bumper, batteries, and servos. The top platform houses sensors and microcontroller electronics. The back part of the bottom platform uses a central skid for balance between the two servos (see Photo 1).

Given my background as a Microchip Developer and Academic Partner, I used a Microchip Technology PIC32 microcontroller, a PICkit 3 programmer/debugger, and a free Microchip IDE and 32-bit complier for TOMBOT. (Refer to the TOMBOT components list at the end of this article.)

It was a real thrill to design and build a minimal capability robot that can—with stacking programming behaviors—emulate some “intelligence.” TOMBOT is still a work in progress, but I recently had the privilege of demoing it to a first grade class in El Segundo, CA, as part of a Science Technology Engineering and Mathematics (STEM) initiative. The results were very rewarding, but more on that later.

A control system for a completely autonomous mobile robot must perform many complex information-processing tasks in real time, even for simple applications. The traditional method to building control systems for such robots is to separate the problem into a series of sequential functional components. An alternative approach is to use behavioral programming. The technique was introduced by Rodney Brooks out of the MIT Robotics Lab, and it has been very successful in the implementation of a lot of commercial robots, such as the popular Roomba vacuuming. It was even adopted for space applications like NASA’s Mars Rover and military seekers.

Programming a robot according to behavior-based principles makes the program inherently parallel, enabling the robot to attend simultaneously to all hazards it may encounter as well as any serendipitous opportunities that may arise. Each behavior functions independently through sensor registration, perception, and action. In the end, all behavior requests are prioritized and arbitrated before action is taken. By stacking the appropriate behaviors, using arbitrated software techniques, the robot appears to show (broadly speaking) “increasing intelligence.” The TOMBOT modestly achieves this objective using selective compile configurations to emulate a series of robot behaviors (i.e., Cruise, Home, Escape, Avoid, and Low Power). Figure 1 is a simple model illustration of a behavior program.

Joseph Jones’s Robot Programming: A Practical Guide to Behavior-Based Robotics (TAB Electronics, 2003) is a great reference book that helped guide me in this effort. It turns out that Jones was part of the design team for the Roomba product.

Debugging a mobile platform that is executing a series of concurrent behaviors can be daunting task. So, to make things easier, I implemented a complete remote control using a wireless link between the robot and a PC. With this link, I can enable or disable autonomous behavior, retrieve the robot sensor status and mode of operations, and curtail and avoid potential robot hazard. In addition to this, I implemented some additional operator feedback using a small graphics display, LEDs, and a simple sound buzzer. Note the TOMBOT’s power-up display in Photo 1b. We take Robot Boot Camp very seriously.

As you can see in the robot’s block diagram (see Figure 2), the TOMBOT is very much a minimalist system with just enough components to demonstrate autonomous behaviors: Cruise, Escape, Avoid, and Home. All these behaviors require the use of left and right servos for autonomous maneuverability. 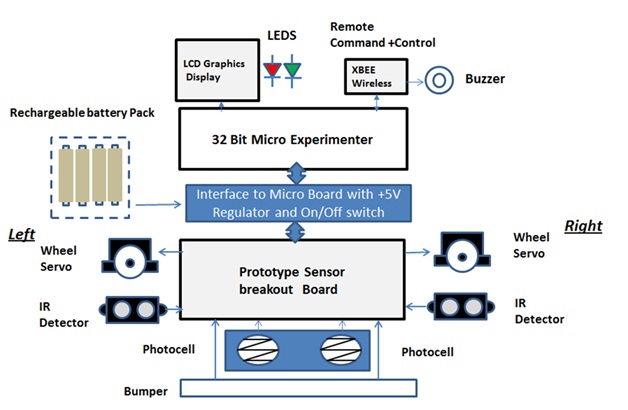 The Cruise behavior just keeps the robot in motion in lieu of any stimulus. The Escape behavior uses the bumper to sense a collision and then 180° spin with reverse. The Avoid behavior makes use of continuous forward-looking IR sensors to veer left or right upon approaching a close obstacle. The Home behavior utilizes the front optical photocells to provide robot self-guidance to a strong light highly directional source. It all should add up to some very distinct “intelligent” operation. Figure 3 depicts the basic sensor and electronic layout. 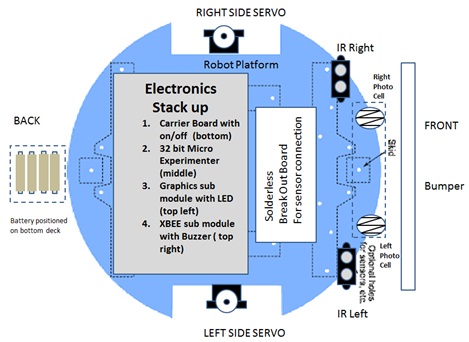 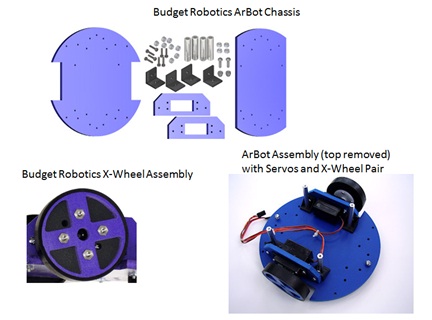 Figure 4: The platform and wheel set

A picture is worth a thousand words. Photo 2 shows two views of the TOMBOT prototype. 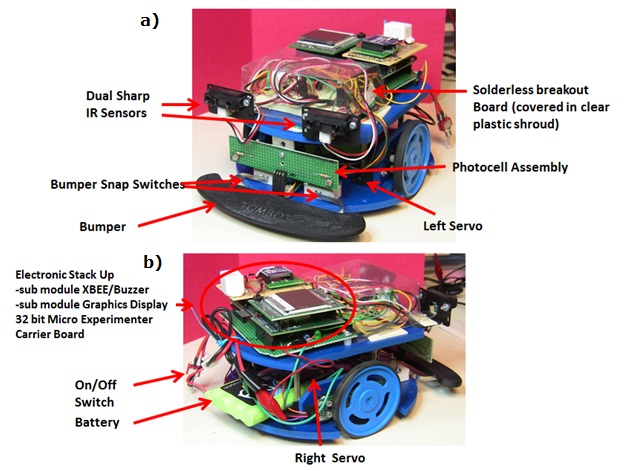 Photo 2a: The TOMBOT’s Sharp IR sensors, photo assembly, and more. b: The battery pack, right servo, and more.

Photo 2a shows dual Sharp IR sensors. Just below them is the photocell assembly. It is a custom board with dual CdS GL5528 photoconductive cells and 2.2-kΩ current-limiting resistors. Below this is a bumper assembly consisting of two SPDT Snap-action switches with lever (All Electronics Corp. CAT# SMS-196, left and right) fixed to a custom pre-fab plastic front bumper. Also shown is the solderless breakout board and left servo. Photo 2b shows the rechargeable battery pack that resides on the lower base platform and associated power switch. The electronics stack is visible. Here the XBee/Buzzer and graphics card modules residing on the 32-bit Experimenter. The Experimenter is plugged into a custom carrier board that allows for an interconnection to the solderless breakout to the rest of the system. Finally, note that the right servo is highlighted. The total TOMBOT package is not ideal; but remember, I’m talking about a prototype, and this particular configuration has held up nicely in several field demos.

I used Parallax (Futaba) continuous-rotation servos. They use a three-wire connector (+5 V, GND, and Control).

Figure 5 depicts a second-generation bumper assembly.  The same snap-action switches with extended levers are bent and fashioned to interconnect a bumper assembly as shown.

A 32-bit Micro Experimenter is used as the CPU. This board is based the high-end Microchip Technology PIC32MX695F512H 64-pin TQFP with 128-KB RAM, 512-KB flash memory, and an 80-MHz clock. I did not want to skimp on this component during the prototype phase. In addition the 32-bit Experimenter supports a 102 × 64 monographic card with green/red backlight controls and LEDs. Since a full graphics library was already bundled with this Experimenter graphics card, it also represented good risk reduction during prototyping phase. Details for both cards are available on the Kiba website.

The Experimenter supports six basic board-level connections to outside world using JP1, JP2, JP3, JP4, BOT, and TOP headers.  A custom carrier board interfaces to the Experimenter via these connections and provides power and signal connection to the sensors and servos. The custom carrier accepts battery voltage and regulates it to +5 VDC. This +5 V is then further regulated by the Experimenter to its native +3.3-VDC operation. The solderless breadboard supports a resistor network to sense a +9-V battery voltage for a +3.3-V PIC processor. The breadboard also contains an LM324 quad op-amp to provide a buffer between +3.3-V logic of the processor and the required +5-V operation of the servo. Figure 6 is a detailed schematic diagram of the electronics. 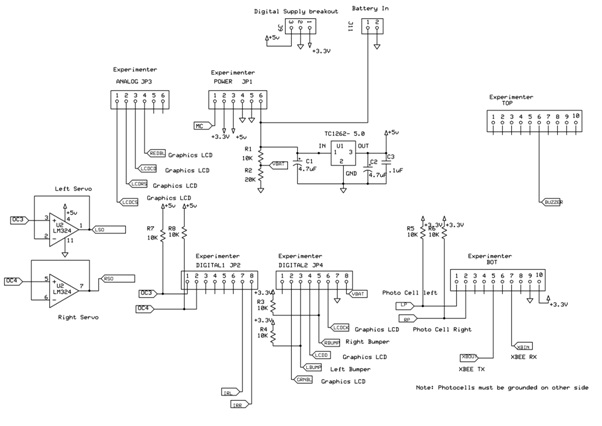 A custom card for the XBee radio carrier and buzzer was built that plugs into the Experimenter’s TOP and BOT connections. Photo 3 shows the modules and the carrier board. The robot uses a rechargeable 1,600-mAH battery system (typical of mid-range wireless toys) that provides hours of uninterrupted operation. 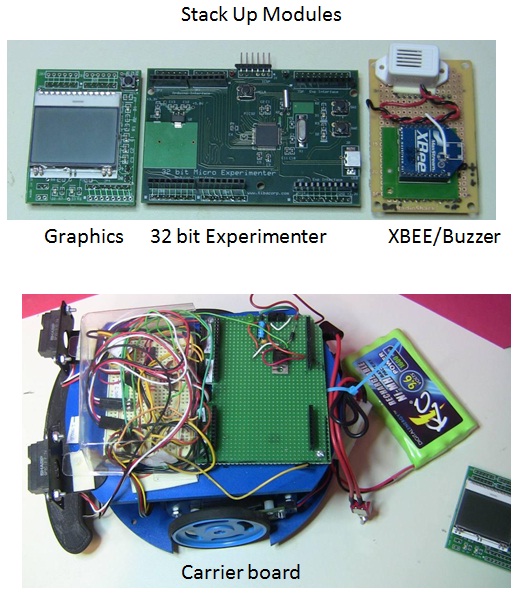 Photo 3: The modules and the carrier board 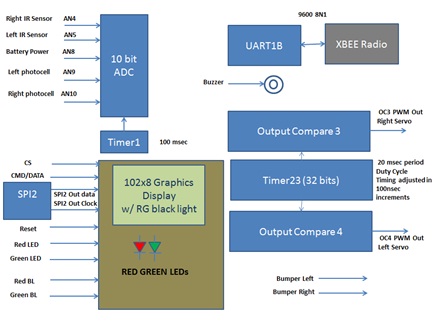 The PIC32 pinouts and their associated Experimenter connections are detailed in Figure 8. 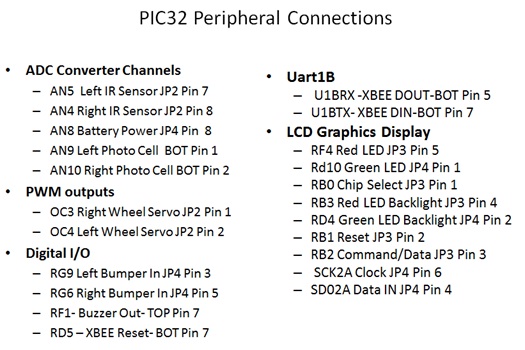 The TOMBOT Motion Basics and the PIC32 Output Compare Peripheral

Let’s review the basics for TOMBOT motor control. The servos use the Parallax (Futaba) Continuous Rotation Servos. With two-wheel control, the robot motion is controlled as per Table 1. 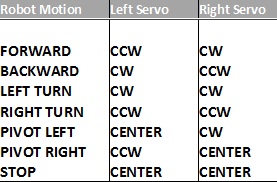 The servos are controlled by using a 20-ms (500-Hz) pulse PWM pattern where the PWM pulse can from 1.0 ms to 2.0 ms. The effects on the servos for the different PWM are shown in Figure 9. 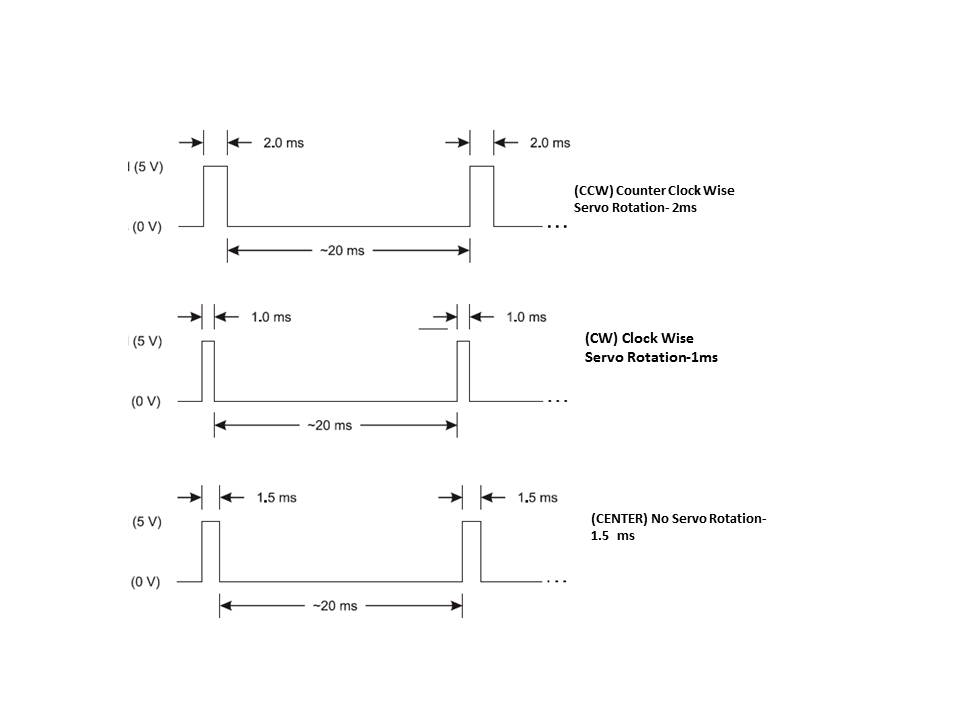 The PIC32 microcontroller (used in the Experimenter) has five Output Compare modules (OCX, where X =1 , 2, 3, 4, 5). We use two of these peripherals, specifically OC3, OC4 to generate the PWM to control the servo speed and direction. The OCX module can use either 16 Timer2 (TMR2) or 16 Timer3 (TMR3) or combined as 32-bit Timer23 as a time base and for period (PR) setting for the output pulse waveform. In our case, we are using Timer23 as a PR set to 20 ms (500 Hz). The OCXRS and OCXR registers are loaded with a 16-bit value to control width of the pulse generated during the output period. This value is compared against the Timer during each period cycle. The OCX output starts high and then when a match occurs OCX logic will generate a low on output. This will be repeated on a cycle-by-cycle basis (see Figure 10). 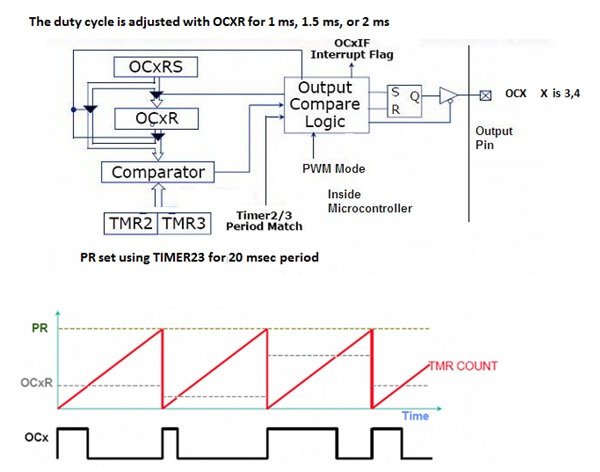 We set the research goals and objectives for our autonomous robot. We covered the hardware associated with this robot and in the next installment we will describe the software and operation.

Tom Kibalo holds a BSEE from City College of New York and an MSEE from the University of Maryland. He as 39 years of engineering experience with a number of companies in the Washington, DC area. Tom is an adjunct EE facility member for local community college, and he is president of Kibacorp, a Microchip Design Partner.

Tom Kibalo is principal engineer at a large defense firm and president of KibaCorp, a company dedicated to DIY hobbyist, student, and engineering education. Tom, who is also an Engineering Department adjunct faculty member at Anne Arundel Community College in Arnold, MD, is keenly interested in microcontroller applications and embedded designs. To find out more about Tom, read his 2013 Circuit Cellar member profile.