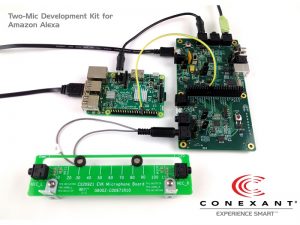 The Conexant AVS-approved AudioSmart 2-Mic Development Kit is designed to be easily integrated into any third-party AVS system prototype based on the Raspberry Pi. Its dual-microphone voice processing capability recognizes the “Alexa” wake word and delivers speech requests from anywhere in a room—even in noisy, real-world conditions. It also enables voice barge-in capabilities, allowing users to interrupt their Alexa device when it is playing music or other types of sound.